Pure entertainment: that's Vanquish in a nutshell. This speedy and thrilling third-person cover-based shooter is all madness, overwhelming you with gigantic robots, flurries of gunfire, and explosions so powerful and colorful that you might think you feel the heat. There are a lot of things to love about Vanquish, but its most impressive feat is that while it uses mechanics you've seen in other shooters, it feels nothing like them. The focus on speed, the relentless pace, and the fantastic boss fights give Vanquish a feel and style of its own, while its good looks and buttery-smooth frame rate ensure you're always swept into the action. When you walk away from the campaign, buzzing with the rush of adrenaline, it won't be the excruciating dialogue or the forced voice acting you remember most, but the joy you felt when zipping around the battlefield, gunning down metallic transforming scorpions and evading the barrage of bullets vomited by a dozen hardy turrets.

In Vanquish, like in so many third-person shooters, you can take cover behind various objects and peek out to take potshots at your enemies. But any comparisons made with games like Gears of War and Army of Two are superficial ones. Vanquish is all about speed and flow, and to that end, it uses two features that turn the predictable rhythms of other shooters upside down. The first is the ability to use the boosters on your fancy armored suit to slide about the battlefield at a high velocity. The other is AR mode, which allows you to slow time down to a crawl. Sliding and slo-mo can be used in tandem to create awesome moments of your own making in which (for example) you leap over cover, boost toward a group of enemies, and activate AR mode, gunning down a raft of robots while bullets whiz past your head. You're meant to stay on the move rather than to rely on cover to provide unerring protection, and many of the game's facets contribute to the scurrying pace. Enemies flank you, bots sporting hoverjets loom above you, and jumbo cyborgs fire rockets that turn cover objects into dust. There's a weapon upgrade system, but enhancements are applied on the battlefield instantly, not in menus. When you get close to death, the game automatically triggers AR mode, giving you more than a fighting chance to stay alive by temporarily slowing things down. All of these facets keep you always in battle, and always on the move.

Vanquish's reliance on its two primary mechanics leads to the faintest sense of staleness here and there. However, these brief glimpses at repetition are momentary hitches in a game that constantly pushes you ever onward. Any given Vanquish level might be considered a high-energy set-piece sequence in another game. You rush across a collapsing bridge while fending off armored foes; battle inside a cylindrical construct in which the entire inner surface exerts a gravitational pull; and gun down huge armored vehicles outfitted with intimidating drills. Other levels give you short but welcome breathers while letting you focus on Vanquish's other impressive elements. A calm section involving sniping a series of spotlights lets you take in the game's intricate futuristic environments and attractive lighting. A dimly lit escort mission beneath the ravaged urban terrain tones down the speed but ramps up the tension. The basic mechanics never evolve, but the game still keeps you engaged by switching up your enemies, playing with the environments, and subtly adjusting the tempo of battle.

A number of powerful enemies and boss fights further fortify the action. Standard enemies include tall walkers with bulbous bodies, robotic grunts attacking en masse, elephantine automatons that shine death beams on you, and plenty more. A typical level tosses multitudes of foes at you at once, forcing you to slide in and out of cover and use all the weaponry at your disposal. As it happens, you have only one weapon, which can metamorphose into one of three different forms at any given time. You still get the traditional ability to gather ammo and weapons (or in this case, weapon configurations) from the battlefield, but in Vanquish, you get the added benefit of the weapon's always-cool transformation animations.

Another plus: regardless of its form, that fancy gun is a blast to shoot. Familiar but effective configurations include machine guns and shotguns, while more unusual ones have you firing spinning discs and shock bubbles. Hard-hitting sound effects and great animations give every shot that lands a rewarding feeling of oomph, and each weapon form has its uses, particularly during Vanquish's larger-than-life boss battles. The colossal robot that serves as the first boss is but a taste of the battles to follow. A shimmering figure reminiscent of Iron Man, a soaring angel of death, a gruff villain who wasn't aware that steroids should be taken in moderation--these antagonists all look and behave differently, but each requires you to slide about and activate AR mode in varying rhythms, which makes each of these encounters fun and exciting.

Vanquish's original mechanics wouldn't have the same impact if the game didn't also deliver the basics, but the essential gameplay elements are as good as you could hope for. For example, the cover system has exactly the right degree of stickiness, which is an important factor in ensuring that you always feel completely in command. In fact, considering the amount of chaos surrounding you and the speed with which you rocket ahead, it's a wonder that you rarely feel out of control. Regardless of which platform you prefer, the controls are tight and responsive, and the asymmetrical levels practically guarantee that you never feel lost. As a result, even the most challenging sequences never feel unfair, because you are always in control of your own destiny. The factors that contribute to Vanquish's substantial level of difficulty are perfectly tuned. The bosses are tough but don't possess absurdly inflated life bars, so the fights last just the right amount of time. The artificial intelligence is surprisingly solid for a game that throws so many enemies at you at once; your foes stay on the move, use cover in smart ways, and aren't afraid to run up and cuff you if you come in too close. They are also aware of the friendlies that join you on the battlefield and react accordingly, which makes you feel like an important part of a vast offensive, rather than a one-man army with a target tattooed on your forehead.

Tying the action together is a silly story brimming with ridiculous and occasionally embarrassing dialogue. Vanquish opens with a solemn scene showing the residents of San Francisco falling victim to a frightening beam weapon that appears to boil them from the inside out. It's a disturbing introduction, but things take a turn for the campy almost immediately when you discover that the man behind it all is the Russian head of state, who sports small metal discs in his head and speaks with hammy evil overtones reminiscent of so many other fictional Russian megalomaniacs. Player character Sam Gideon and Lieutenant Colonel Robert Burns act as if they're trying to see who can sound more raspy, and their lines are so laden with machismo that it's hard to tell if the story's bad, or if it's purposefully spoofing the adrenaline-fueled virility on display in so many other cover-based shooters. Certain laugh-out-loud moments, however, may have you inclined to believe the latter. A joke about Roombas is too funny not to guffaw at, and a cleverly designed recurring boss is sure to give you a chuckle. Whether or not developer Platinum Games meant for the story to be a serious one, it is one you shouldn't take seriously. At least action junkies will enjoy the over-the-top cutscenes, replete with impossible choreography, clashing metal titans, and flippant shots of Sam lighting a cigarette at the most unusual moments.

More important than Vanquish's story is its sense of place. There's a bit of fuzziness that pervades the visuals, but the texture resolution is a minor point considering how much is always going on, all of the time. Explosions are more vibrant and intense than in most games. Robots don't just go boom when destroyed--they go boom, bang, and kablooey. Defeating a boss means a fireworks display flaming across the screen, though even smaller enemies produce more snaps, crackles, and pops than you'd expect. The high quality of the effects gives the action the right amount of visual brilliance, and their brightness is a nice contrast with the industrial sterility of some of the environments. Small details are also noteworthy, such as the view of space from aboard a station in orbit. Impressively, apart from a few rare moments, Vanquish renders everything at a slick and consistent clip. Not to be outdone, Vanquish's sound effects are explosive and evocative, capturing the expansive battles without drowning in sonic chaos. Slipping into slow-motion creates a cool concoction of deep rumbles and dreamy warbles, and robots transform with a creative series of clanks and clunks. The clangs and clatters are complemented by an up-tempo but unobtrusive soundtrack that, much like the combat, subtly changes its tone just when it falls into a comfortable rhythm.

You may run into a few glitches, which is unfortunate considering this package's overall elegance. Several levels require you to defeat every enemy before moving on, yet it's possible for a foe to get knocked back and become impossible to hit--an occasion that can be corrected only by restarting from the last checkpoint. Fortunately, repeating the section you just played isn't punishment in Vanquish--it's your chance to reexperience the unabashed joy of making robots explode in a tempest of sights and sounds. Whether you're gunning through the seven-hour campaign (sadly, on the short side) or tackling the entertaining challenge rooms (there is no multiplayer), it's hard not to get taken in by the constant exuberance. Vanquish feels exactly right. It's fast and furious. It's totally entertaining. It's got style oozing from every pore. Vanquish is all game and no filler, and that's exactly what makes it one of the most gleeful and memorable experiences of the year. 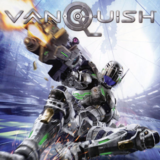