While a fairly short game, the depth and density of the story and gameplay contained in Vagrant Story give it an intensity missing from most longer games.

Let's just get it out of the way - Vagrant Story is a ground-breaking game. A melange of the action, adventure and RPG genres, Square has truly beaten all odds and produced an engaging, seamless epic unlike any other. Despite a few interface and complexity issues, Vagrant Story is a rare and nearly perfected game.

A brutal battle wages between the Knights of the Crimson Blade and the Mullenkamp Cult in the city of Lea Monde. Caught in the middle is Ashley Riot, an agent for the Valendia Knights of Peace's elite Riskbreaker unit. After a chance encounter with the heartless leader of the Mullenkamp Cult, Sydney Losstarot, Ashley finds himself in a life-or-death game of cat and mouse amidst a deeper plot larger than the two of them. What are Sydney's intentions, and how does Ashley play into his master plan? As with Final Fantasy Tactics, which was developed by the same team, the lines between good and evil are endlessly blurred and the story is complex and twisted.

Many have described Vagrant Story as "Medieval Gear Solid," a comparison that both is correct and not correct. While the Metal Gear feel is there thanks to the perspective, attention to detail, and emphasis on cinematics, one never actually has to skulk through shadows, avoid detection, and the like. An odd blend of action, adventure and RPG gameplay, a lot of Vagrant Story's charm lies in the sheer amount of control the player has in playing what is mostly a linear game. Most of the game takes place underneath Lea Monde, where Ashley runs through room after room, slaying monsters and recovering information and keys to aid Sydney's pursuit. You navigate as you would in Metal Gear Solid, guiding the character with the analog pad and rotating the viewpoint with the L and R buttons. Ashley can switch in and out of battle mode, freeing his hands for tasks such as lifting boxes or grabbing edges. While the latter isn't emphasized too heavily, Vagrant Story does have a surprising compunction for box puzzles. While they start off easy, they eventually become fairly fiendish with the addition of a variety of new and different box-types. While navigating the labyrinthine corridors under Lea Monde is all done in real time, battling is a decidedly different affair.

Even with all of the other gameplay elements thrown in, combat is central to Vagrant Story. Perhaps a tribute to one of the interesting things to come out of Parasite Eve, tapping the attack button pauses the game and causes a large wireframe sphere to erupt from Ashley's body. Representing the range of the current weapon, you can target any item within the sphere for an attack. Detailed hit-percentage and damage stats help you plan your attacks more effectively, but attacking some areas can have other effects. For example, if you attack a monster's legs there's a good chance you'll reduce their movement rate by 50 percent.

After defeating the first boss, Ashley will gain the use of chain abilities. These allow Ashley to perform consecutive hits when attacking enemies, with every additional attack benefitting Ashley in ways other than sheer damage. Ashley can ready up to three of these at a time and with the proper timing, chain them until the target keels over. For example, you can restore magic points or life with a carefully-timed chain attack. Learned at the same time as chains, defense abilities allow you to key different kinds of defense. When attacked, tapping the right button could restore half of the damage you just took or reflect it back at the enemy. After gaining enough experience, you'll be presented with a choice as to which new ability you'd like to learn, letting you customize your time with Ashley and develop his abilities to your own play style. Using chain and defense abilities is useful, but builds Ashley's risk level, preventing them from being abused. Essentially a fancy name for fatigue, a high risk level lowers Ashley's ability to to connect with both weapons and spells. While one could theoretically chain attacks together forever, players will think twice before doing so, maintaining a needed element of strategy and balance.

In addition to chain and defense abilities, Ashley has a few more elite tricks up his sleeve. Break arts, learned after gaining considerable experience, allow Ashley to sacrifice some of his own life meter to inflict massive damage upon an enemy. As Ashley progresses to and through the dark city of Lea Monde, many enemies will drop pages from the legendary spellbook Grimon. Each page contains a single spell that is memorized once read. Magic falls into four categories, such as attack, healing, and status magic. Some spells, such as the explosion and thunder burst spells, let you position a sphere of attack allowing you to attack multiple enemies or multiple body parts on the same enemy. While status spells are extremely useful, most of the attack spells are too MP-intensive to really be worthwhile. Despite all of these options, Vagrant Story's gameplay interface is relatively clean and intuitive - hold down the L2 button and you have fast access to just about everything.

Outside of battle, Vagrant Story continues its control fixation with a maze of menus that lets players customize their experience even more. In addition to the standard RPG equip and inventory screens, Vagrant Story lets you forge your own weapons and armor from items found throughout the game. Ashley can only perform these feats in workshops scattered throughout the game, and each factory can only forge items made from certain materials. As Ashley's weapons gradually become more accustomed to killing each of the six types of monsters, it's worthwhile to build and evolve six weapons through the course of the game. Switching weapons is the one thing not readily accessible through the L2 menu and would make a welcome addition given the frequency they're swapped. In addition to forging new weapons, Ashley can disassemble any weapon and reassemble a new one from its parts, allowing for greater customization. Finally, gems can be inlaid to alter a weapon's stats and allow for more in the way of on-the-go changes, like changing a weapon's elemental attribute.

As witnessed above, Vagrant Story has a lot of complexity, often times too much - even those who understand the weapons system may have trouble handling certain enemies. While Square's other games have become more and more accessible to the masses while maintaining a certain hard-core element to be experimented with, Vagrant Story's combat system virtually requires a comprehensive understanding of the weapon and stat development systems. Not only are the core concepts behind this inconsistent at times, a few interface oversights further confuse the matter. Unfortunately, Vagrant Story's manual isn't much of a help in these situations. This becomes particularly irksome about halfway through the game, but only slightly hinders the game's momentum.

Vagrant Story is one of the most beautifully cinematic games to date, easily toppling Metal Gear Solid. With character designs by the venerable artist behind Final Fantasy Tactics' noseless wonders, Akihiko Yoshida, Vagrant Story looks and feels like a living 3D comic brought to life. Each model is fluidly animated and textured with a sketch-like quality that gives the game a visual feel all its own. Topped off with impressive lighting and spell effects, Vagrant Story is a visual feast. Adding to the game's cinematic charm is yet another impressive score by Hitoshi Sakimoto, one of Final Fantasy Tactics' dual composers. The sound effects are well done and impressive, straying from Square's standard of synthed noise - from an audio standpoint, the only thing conceivably missing is voice - while the jagged comic dialog boxes are charming, one can't help but think this game could be more impressive with voice. However, avoiding Metal Gear Solid's glut of dialog is definitely a plus, especially given the literally perfect translation. Square's localization efforts have been lackluster and purely functional in the past, but Vagrant Story's is delightfully different. We can only hope that Chrono Cross' and other translations receive the same attention as Vagrant Story - you'll be spoiled from here on out.

In the end, Vagrant Story's disparate parts come together in a beautiful, cinematic experience. The game's story is compelling and constantly urges the player to press forward, giving the game the addictive quality of the finest RPGs. While a fairly short game, the depth and density of the story and gameplay contained within give Vagrant Story an intensity missing from most longer games, as well as a higher replay value thanks to the "New Game +" option. While the learning curve is a little high, even for RPG veterans, Vagrant Story offers an experience that's not to be missed. 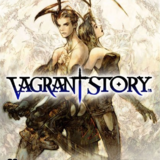