U.S. Navy Fighters may not be the most realistic flight sim released in the past few years, but it's certainly one of the most successful and playable, for a few reasons. The flight models, though simplified, are complex enough to give mid-level simulation enthusiasts the feel that there's something under the hood. In other words, they won't mistake this title for Hind, but they'll do just fine. Combine the adequately sophisticated models with almost instant playability, a wide range of flyable aircraft and opponents, good graphics, and a quick mission creation mode, and you have a completely entertaining and accessible sim worthy of its predecessor, Chuck Yeager's Air Combat.

U.S. Navy Fighters '97 brings this aging title into Windows 95 with a few upgrades that may make it a required purchase for fans. (The $15 rebate EA is offering can't hurt either.) The original game (in its entirety) as well as the Marine Fighters add-on disk are here (this was previously packaged for DOS as U.S. Navy Fighters Gold) in a native Win95 environment. With only a handful of native Win95 sims (Su-27, Hind, and the reissue of Apache are the only ones that come to mind), this will be an important factor for many. The graphics haven't been improved for the reissue, and while they still look great, they're beginning to show their age when compared with more recent titles like F-22 and Longbow.

Having the complete original game means you're able to fly all the aircraft from the original USNF, including the A-7 Corsair II, F-14 Tomcat, F/A-18 Hornet, Spectre, F-22, and Su-33 Flanker, as well as the AV-8B Harrier II (U.S.), the Mark 2 Sea Harrier (U.K.), and the Yak-141 Freestyle (Russian/Ukrainian) vertical/short take-off and landing planes from Marine Fighters. In addition, four new Vietnam era planes have been added: the F-4 Phantom, F-8 Crusader, MiG-27, and MiG-21.

You're not likely to be blown away by how different each of these planes fly, but they DO vary in terms of handling, payload, avionics suite, and cockpits, and they allow for a wide range of air-to-air, ground strike, escort, interception, anti-shipping, and other missions. Some are more impressive than others: The Harrier family has full in-flight vectoring and vertical/short take-offs, allowing for some tricky maneuvers in the thick of battle as you change the direction of the thrust. The F-22 has a high-tech cockpit and set of sensors, with a large air and ground payload to complement it. Most notable are USNF '97's new planes, which change the dynamics of air combat drastically as they are used over the course of a completely new campaign set in Vietnam.

This new theater of operations is another significant addition to USNF '97. The jungles of Vietnam and Cambodia and the surrounding areas are the site of 25 new missions. Jet fighters really came of age in Vietnam, as smart munitions begin to come into their own and combat became more complex. Many of the missions here are historical, though flights which were actually handled by the Air Force are, in the game, performed by the Navy. You go through everything from bridge strikes to close air support and escort, taking on some of the toughest opponents I've found lately in a combat sim. The air combat dynamic is very interesting here, since it combines the speed and weaponry we associate with modern jet combat with the nail-biting, in-close, down 'n' dirty dog fighting we think of as World War II-era. Complex radar and sensor suites were still evolving, with the result that you can't rely on a "smart" cockpit to keep you informed of your combat situation. It makes for some truly challenging furballs.

One final feature makes USNF '97 a good bet: head-to-head combat. The original title didn't allow for multiplayer gaming, but now two to eight players can compete in network and modem play, flying cooperatively or against each other. The Windows 95 interface makes it fairly easy to set up, and it adds a great deal to this game. Throw in a new Jane's Reference Guide, with video clips, photos, and information on the planes and weapons, and you have a worthwhile enhancement to a good product. The new packaging and intro make USNF '97 part of the Jane's Combat Simulation series, which includes ATF and Longbow; its new features and enduring playability make it a worthy addition to that distinguished line. 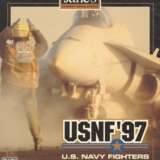