Infiltrating enemy territory and tactically eliminating evildoers is tense and enjoyable in Unit 13.

A quote widely misattributed to George Orwell asserts that people sleep peacefully in their beds at night only because rough men stand ready to do violence on their behalf. The members of Unit 13 are such men. Armed with state-of-the-art weaponry and code names like Animal, Zeus, and Chuckles, these grizzled soldiers venture deep into enemy territory to put the enemies of peace and freedom to the sword. Unit 13 lets you undertake these missions, and it makes accomplishing your objectives and surviving against imposing odds a suspenseful and satisfying task.

There's not much of an overarching story here. You get 36 separate missions to complete, which see you trying to thwart the efforts of the terrorist organization Awlaad Al-Qowah by assassinating high-ranking members, rescuing kidnapped journalists, obtaining intelligence, and so forth. These small missions are well suited for gaming on the go, with some of them lasting just a few minutes, but the disjointed structure prevents you from getting engrossed in them the way you might with a cohesive, story-driven campaign.

The nine environments your missions take you to include a stately embassy, a metro station, a Middle Eastern bazaar, and others. The realistic details and believable layouts of each one make them fitting settings for your grim tasks. Bodies collapse convincingly after you deliver the killing blow, lending weight to your actions. Unfortunately, the voice chatter undermines the serious vibe a bit. Both your current operative and the unseen commander who chimes in over the headset sometimes lay on the gung ho attitude a little thick, straining credibility by reminding you that the people you're killing are evil with a capital EVIL and that you’re doing the world a favor by terminating them with extreme prejudice. It's as if Unit 13 is afraid that you might, even for a moment, question the nobility of your actions or entertain the idea of any gray morality in this tale of shining champions of justice against absolute monsters.

The missions fall into four categories: covert, direct action, deadline, and elite. Covert missions require you to maneuver sneakily. If an alarm is triggered--by an enemy you've alerted to your presence or by you taking a wayward step into the sights of a surveillance camera or the laser beams of a security barrier--the mission ends in failure. In direct action missions, you're free to approach situations in whatever manner you see fit, from sneaking around to charging in guns blazing. Deadline missions require you to work quickly and complete your objectives before time runs out. Elite missions, as you'd expect, are the toughest of the bunch. On elite missions, you do not have regenerating health; your health is restored only once per mission, at the halfway point. Additionally, there are no checkpoints. Death means starting the entire mission over from the beginning.

Regardless of the type of mission you're on, moving with caution and an awareness of your surroundings are key. Unit 13 doesn't shuffle you down corridors; it places you in open environments that are often patrolled by enemies and provide ample opportunities for cover. It's very easy to line your reticle up with exposed enemies while safe behind a wall and then pop out to instantly eliminate them with headshots. The aim assist helps you keep a bead on enemies if they start moving. The ease with which you can target and kill enemies makes you feel like an efficient, highly trained operative, but it also takes some of the satisfaction out of the shooting.

So the challenge lies not in targeting and killing foes but in keeping yourself alive. Most missions give you regenerating health, but it still only takes a few shots in rapid succession to finish you off. So when you opt to hide behind cover to take out large groups of enemies, you want to be sure to choose a strong position that doesn't make it easy for enemies to flank you. The fragility of your operative's life and the need to stay vigilant make moving through these dangerous environments suspenseful, at least at first. Enemies are positioned in the same places and follow the same patrol patterns each time you attempt a mission. So if you try a tactic one time that doesn't work well, you can learn from it and simply try a different tactic on your next attempt. This allows for a trial-and-error approach in which you keep trying different tactics--different pathways through the environment, different cover positions--until you stumble on those that allow you to get the job done.

Still, it's rewarding to get to the point where you know a mission inside out. There's a kind of spy-movie grace to moving through missions undetected; always being in the right place at the right time to perform melee kills on patrolling enemies from behind and take cover in ideal spots to neutralize foes with headshots without fear of repercussion. The illusion is broken occasionally, however, by absurd enemy behavior. A guard might try repeatedly and futilely to shoot you through a solid wall, or you might find a soldier who is alerted to your presence by the sound of your gunfire but is diligently looking away from where the sounds came. But these moments are relatively uncommon, and for the most part, enemies respond believably, making use of cover and exploiting weaknesses in your position.

The game's scoring system encourages you to find the ideal approaches to missions. Completing your objectives earns you points, as do actions like covertly infiltrating an enemy facility or taking out all the enemy soldiers in an area. But your best bet for setting scores that dominate the leaderboards is to make the most of streaks. Perform a few headshots in rapid succession and you trigger a streak; the more headshots you pull off while the streak lasts, the higher your multiplier gets and the more points you earn. The same goes for stealth kills and other demonstrations of skill. This scoring system makes returning to the game's brief missions worthwhile, particularly after you get a notification that a friend of yours has beaten your score on one.

Unfortunately, many of the elite missions go beyond putting a premium on tactical smarts and become downright punishing. The lack of checkpoints during these operations means that failure while trying to complete the second or third mission objective sends you all the way back to the beginning, which forces you to go through the motions of completing earlier objectives again. This gets tiresome quickly, and you might wish that failure simply carried with it a penalty to your final score and star rating, rather than serving up a big helping of repetition.

You can tackle any mission alongside another player; all missions, regardless of type, lack checkpoints when played cooperatively, but this is mitigated by the fact that you can revive your partner if he or she is incapacitated. Some technical hiccups currently make connecting considerably more difficult than it should be, and even when you do connect, you might spot some strange happenings, like your partner gliding up ladders without a climb animation. But working in tandem with another player to take out your enemies even more efficiently than you could alone is gratifying.

As you complete missions, you earn experience points for your operatives, and as they level up, they get access to more weapons, scopes, grenade types, suppressors, and other gear. Their abilities also improve; Zeus, the shotgun-toting point man, gets reduced recoil and faster reloads on his weapon of choice, among other benefits. The stealth expert Ringo can carry more smoke grenades and have longer-lasting stealth kill streaks with improved point bonuses. These advancements encourage you to take your developed operatives back to earlier missions to try to improve your scores, and they provide a meaningful reward for your progress.

You're also rated for your performance on each mission on a scale of one to five stars. As you earn stars, you unlock high-value target missions. There are nine of these in all; each one is a challenging mission in which your goal is to assassinate one of the leaders of Awlaad Al-Qowah. Additionally, if you earn three or more stars on a mission, you gain access to the "dynamic" version of that mission, which takes place in the same location as the ranked version but features randomly generated objectives and enemy placement each time. These missions are a good way to earn some additional XPs for your operatives without repeating the same missions again and again, but without leaderboards, they don't have the competitive allure of their ranked counterparts. On the other hand, the daily challenge missions are very competitive indeed. You only get one shot at each day's challenge, and you have to make the very best of it if you harbor any hopes of beating out other players for the top score.

So there's certainly a good amount of content here. The predictable enemy behavior and easy shooting of Unit 13 sometimes make the action feel a bit rote, and some missions are downright frustrating. However, the ways in which the game rewards your skills and requires you to take a tactical approach as you stay mindful of your surroundings encourage you to be the best operative that you can be. It feels good to do the free world proud. 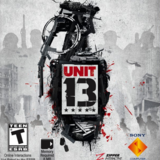