While there's plenty of action, the adventure is lacking in Uncharted's PlayStation Vita debut.

On paper, Uncharted: Golden Abyss sounds like it should be great. Hell, it should be better than great, but even with the original voice actors reprising their roles, luscious visuals, and plenty of opportunities to run like crazy from exploding buildings, the spark is missing. It doesn't help that Golden Abyss lacks the level of production we've come to expect from the third-person action adventure series, with lifeless writing, flaky cover detection and AI, plus an erratic frame rate. Nor does the addition of most of the PlayStation Vita's new input methods add anything significant to the experience; in some cases, they detract from it. These issues aren't easily overlooked, but get involved with the slick combat and awesome set pieces, and you'll find there's still plenty to like in Drake's latest outing.

Golden Abyss starts out promisingly enough, taking place before the events of the original Uncharted, when Drake is hired by his old friend Jason Dante to uncover the secrets of a Central American jungle. Cue an amazing discovery, a mystery to unravel, and a love interest in the form of archaeologist Marissa Chase, and you've got yourself the beginnings of a great Uncharted narrative. However, it all starts to unravel rather quickly, becoming predictable fare with just a few twists and turns to keep you on your toes. The dialogue isn't particularly snappy either, despite being well acted. Drake's trademark quips come across as forced, with developer Sony Blend's writing coming across like a decent bit of fan fiction rather than a creation from series masters Naughty Dog.

While the story might not fare so well, thankfully, the action and platforming does--for the most part. Navigating your way through the many jungles, rocky mountain ranges, and ruined temples is as easy as on the console versions, thanks to the Vita's full complement of analog sticks. The path you take is decidedly linear, but a variety of walls to climb--some of which crumble beneath you--rope swings, death-defying leaps, and stunning scenery keep the excitement flowing. It's when you use one of the Vita's more esoteric input options that things begin to falter. A tutorial at the start of the game introduces these to you gradually, but trying to remember what inputs to use can be confusing. Take using a rope, for example. You can push forward and hit X to jump to it, or you can tap on the rope. Once there, you can climb it using the left analog stick or stroke the rear touch pad with two fingers to do the same. How about swinging on it? There's the analog stick again. Or you can rock the Vita back and forth to accomplish the same thing.

Unfortunately, none of the new control methods are any better than using the traditional controls, particularly because your fingers sometimes go unnoticed on the touch screen. Thankfully, you're not obliged to use the touch or motion controls to get Nate around, but there are certain puzzles that require you to do so. These range from such simple tasks as taking charcoal rubbings of artefacts or holding your Vita up to a bright light source to view faded text to more complex tasks, such as piecing together torn-up maps or matching symbols to open locked doors. None are massively taxing on your noodle, but the controls work well, adding an extra layer of interactivity and immersion that wouldn't be possible with just a standard controller.

And yet, there are other times when the touch controls serve only to take you out of that immersion, such as chopping down some bamboo. It requires you to perform three different swipes on the touch screen, but rather than have Nate perform the actions as you swipe, he just stands there lifeless, waiting for the bamboo to spontaneously sever itself so he can proceed. And then there are fistfights, which are also based on swiping. Some are scripted and others are initiated by you in combat. Both lack the level of fluidity you might expect, thanks to some awkward slow-motion animations that change what should be an engrossing brawl into a stumbling punch-up. A lack of touch-screen precision affects the fights too, with some of your swipes mysteriously going unrecognised, causing you to lose a fight or--in the case of scripted events--sending you straight back to the beginning of the cutscene.

Things improve massively when guns are thrown into the mix, providing you with masses of bullet-fuelled action. And, boy, are there a lot of guns. There are pistols, rifles, grenade launchers, machine guns, miniguns, rocket launchers, and turrets, which give you a range of explosive ways to take out your attackers. The feel of the weapons is great, with just the right amount of recoil, and touch and motion controls that work. Swiping on the rear touch pad to zoom the sniper rifle feels natural, and tweaking your aim by moving the Vita is surprisingly effective, letting you compensate for recoil with ease. A great set of sounds accompany the weapons; grenades explode with a satisfying throaty boom, and there's nothing quite like the clatter of an empty bullet shell echoing through a cavern as you take down your last opponent.

You need to put some thought behind your actions, though; you can't just go in guns blazing. Some enemies routinely try to flank you, while others throw grenades to drive you out of cover. It's just as much about keeping moving as it is about making your way through clips. There are times when you might not want to pull out a gun at all, particularly in later levels when you're heavily outnumbered. If enemies haven't been alerted to your presence, you can sneak up behind them and take them down quietly with one swift move. This often prevents them from alerting others and drawing you into a prolonged firefight. Unfortunately, the AI drops a few IQ points when it comes to stealthy attacks, failing to recognise that its once breathing buddy has had his neck snapped only two feet away. Cover detection can also be a problem. There are moments when you're under intense fire and scramble to take cover behind a crate but inexplicably fail to do so, leaving you at the mercy of 1,000 hot shards of lead and giving you the sudden urge to curse very loudly and very often at the screen.

There's cursing to be done during action set pieces too, though it's more "f*** yeah!" than "f*** you." There are some impressive moments as temples collapse and buildings explode while you do your best to escape impending doom, even if the frame rate takes a hammering during the most action-packed sections. A canoe ride and a trip down some treacherous river rapids help to mix things up, providing some exhilarating moments. It's a shame there aren't more of them, with long, repetitive stretches of platforming draining any excitement you might have enjoyed. If you're a fan of shiny things, though, there are heaps of hidden collectibles to find, as well as a picture-taking minigame that encourages exploration, even if it's only within the game's linear confines. Collectibles that you find can be traded with other Vita users via Near (Vita's social networking and discovery service) in "The Black Market," which can be helpful in finding some of the rarer ones and earning trophies for complete collections.

Sadly, that's the closest you're going to get to any multiplayer in Golden Abyss, which is disappointing given how fun it is in Uncharted 3. But then, Golden Abyss is full of disappointments. The action set pieces are great, but there's too few of them; the voice acting is exemplary, but the narrative doesn't do it justice; the touch and motion controls work well for some actions, but they ruin others. For every moment of enjoyment you have, something comes along to spoil it. Despite its problems, though, Golden Abyss still succeeds in delivering some intense, entertaining action and combat. It's not quite the full-blown Uncharted experience on the move that you might have hoped for, but it's damn close. And for that, it should be commended. 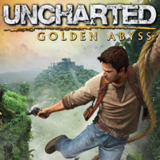