Games that mold themselves to your personal music collection seem all the rage these days, and Turba is the latest in this import-your-own-tunes craze. This isn't the prettiest puzzle game you've ever seen, but it's breezy entertainment, the kind that might keep you occupied for a few hours on a rainy afternoon. Like the beat detection in many games that utilize your music collection, Turba's rhythm recognition isn't exact, which might impact your drive to triumph on the online leaderboards. But the game's block-matching mechanics are appealing, and the unlockable gameplay enhancements and Steam achievements provide a reason to experiment with different tunes to see which ones best suit each of Turba's three modes.

In Turba, like in many games before it, you select three or more adjacent blocks and then destroy them to earn points. In this case, there are four different colors of blocks--red, green, yellow, and blue--and you can create one group of each color before clicking the right mouse button to explode the lot. There are a few twists you need to watch out for, however. Should you select one or more blocks that aren't strung into a three-block structure or larger, they'll turn into unusable black blocks when you click the button. Bomb blocks will explode if you don't eliminate them within a certain time limit, turning adjoining blocks into those very same black atrocities. And there are a few different power-ups (wildcard blocks, random roulette spins that remove a particular color from the board, and so on) that are earned and improved the longer you play. For example, when you first earn the wildcard power, seven blocks turn wild when you activate it; once you level up far enough, it's nine blocks instead.

Turba's most interesting feature, however, is how the rhythm of the accompanying music affects the gameplay. The game includes a number of likable electronic tunes, but it's more fun to select music from your own library and jam along to the beat. By clearing block selections in time with your chosen song, you earn extra points. It's a neat idea, and it's fun to get in a groove, selecting blocks and tapping the mouse button along with the pulse of the music. Unfortunately, Turba's imperfect beat detection means you'll occasionally be bopping along and hit the clear button in proper rhythm, but not be rewarded with the sound effect that signals a successfully synched destruction. It can be an anticlimactic interruption to an otherwise perfect succession of combos, though it's easy to get right back into the zone. Nonetheless, Turba is at its best when you select tunes with an obvious beat.

There are three ways to experience all this toe-tapping block popping. Freeplay mode has a screen full of blocks constantly shifting downward. Because rows drop to the beat while you're in the midst of stringing blocks together, earning a high score on a busy tune can be a pleasant challenge, even on medium difficulty. Ascend mode, in which blocks fade in to the rhythm starting at the bottom of the screen, provides Turba's greatest trial, because it's game over should there be no more room for new blocks to appear. In fact, you're best off sticking to the casual difficulty level here, because even medium difficulty is absolutely maddening on any song lasting more than a minute or two. Yet the same mode on casual showcases the game at its best, forcing you to weigh the risk of allowing more blocks to pop in versus the potential of an enormous combo. Finally, in Descend mode, rows of blocks steadily march toward the bottom of the screen. The ability to scroll the colors of each column up and down in this mode allows for some enormous combos, though Descend lacks the other modes' sense of urgency.

Turba is a fun and pleasant diversion, with a well-implemented system of unlockable upgrades that offer a reason to return whenever you have a moment or two to spare. It won't glue you to the screen in the way of the finest puzzle games, nor do its simple visuals exude the flair of modern games of this ilk--Lumines, Meteos, and so on. But at $9.99, Turba's rhythmic variation on the good old block-matching theme is worth experiencing, particularly if you enjoy games that conform to the beat of your favorite songs. 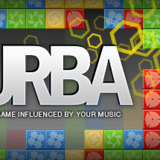