One of the best DS games yet, Meteos delivers a unique and successful twist on the puzzle game formula.

The fate of the entire universe straight-up hangs in the balance in Meteos, a frenetic, fun, and innovative puzzle game exclusively for the Nintendo DS. It's somehow strangely appropriate that the game is the work of none other than Q Entertainment, designer Tetsuya Mizuguchi's studio that also gave the PSP one of its first, best titles, the puzzle game Lumines. After all, the incredibly hectic and cleverly envisioned Meteos is pretty much a perfect counterpart to the trancelike, rather relaxing feel of Q Entertainment's previous game. And on its own terms, Meteos offers up a great, original experience that's plenty of fun whether you play it against the computer or against some friends.

Not many puzzle games bother with storylines, but Meteos doesn't settle for convention. In fact, the game is so bold as to deftly mix cute, colorful graphics with the threat of a science fiction apocalypse in its entertainingly epic introductory cutscene. The planet Meteo, a seething eye-shaped thing that could probably stare Sauron down, spews forth a deadly rain of fragments called meteos, which annihilate practically everything that gets in their way. By some chance, a planet survives the assault as several like-colored meteos latch together and fly off from whence they came. Now various extraterrestrial races must fight to protect their homes by firing the meteos raining down on them back toward their source. And a magnificent spacecraft--the Metamo Ark--is constructed to bring the fight back to Meteo's turf. Here's mud in your eye, you good-for-nothing planet-busting alien bastard.

The premise of the game figures into the action more than you might expect, especially in "star trip," Meteos' main single-player mode. In it, you fight your way through successive stages before finally squaring off against Meteo, after which you're treated to any number of cool little endings. The premise of Meteos justifies the game's hectic pace as well as the outstandingly over-the-top soundtrack. It helps draw you into a game that's just as creative in how it plays as it is in how it presents itself.

In a typical game of Meteos, you'll spend your time keeping a sharp eye on the DS's bottom screen, in which multicolored meteos rain down constantly, piling up higher and higher. Don't mistake this for another Tetris or Puyo Puyo clone, though. For one thing, you can't actually control the meteos as they fall, as you might expect from a typical puzzle game. And once they've landed, all you can do is shift them vertically up or down through the stack they're in. You need to do this because, if three like-colored meteos are placed adjacent to each other either in a row or in a column, they fire off like rockets, launching themselves and all the meteos stacked on top of them up toward the top of the screen. You're constantly trying to stop the meteos from piling too high by blasting them back up into space. Theoretically, the more meteos pile up, the easier it is to find a nearby few that can be matched up and blasted away. The thing is, the more meteos pile up, the more momentum you'll need to push them the heck off the screen. This is a formula that sets up a near-nonstop string of life-or-death near-misses.

The many different levels in Meteos represent all the different planets that have come under fire. Each planet has its own unique properties and other twists you'll just have to get a feel for. It doesn't take long to notice that different planets seem to have a different sense of gravitational pull, for example. On some planets, you may need to fire off your meteos stacks using consecutive launches, forming triplicates multiple times within a single stack to gather enough steam to launch them away. But on other planets, the meteos will jettison offscreen with much less effort on your part, though they may rain down a lot faster and into a much smaller playing field. While the tone of the different levels in Meteos is often distinctly different, make no mistake--the pacing of the game basically ranges from ridiculous speed to ludicrous speed as you're constantly trying to prevent your planet's annihilation.

It's possible to manage your planetary defenses using the D pad and buttons, but it's much faster, easier, and more natural to drag meteos up and down using the stylus. In fact, Meteos controls great this way--the meteos seem like they're just the right size to make it easy to grab hold of individual ones within a stack. You won't blame the controls, only your reflexes, should the meteos stack too high.

The game's got plenty of other twists. For example, as meteos get fired off into the atmosphere, they become incinerated and unable to be matched with any other meteos colors. So if you don't manage to push a chunk of meteos off the screen with enough force, you'll get a big, useless blob of them floating right back down at you, possibly causing serious problems. The other thing is, as you fire meteos off the screen, you're sending them against up to three different opponents. Their own meteo-pushing antics will sometimes cause incinerated meteos to unceremoniously dump down on you, but you can counterattack with your own assault. In three-on-one matches, it's possible to get taken out very, very quickly. Still, it's a great challenge as you try to survive long enough to take out your opponents one at a time while slowing their assault. The DS's top screen lets you see who your opponents are, and peripheral parts of the bottom screen (which are a little too hard to read, actually) let you see what your foes are up to.

The game sports plenty of options. The single-player star trip mode offers three distinctly different paths and multiple modes of difficulty, making it highly replayable and worthy of being the primary mode of play. There's also a free-form mode that lets you choose a stage and different settings and have at it. A survival mode tests how long you can survive a meteo downpour, and challenge modes let you see how many meteos you can launch and how high you can score in a given period of time.

Meteos was clearly designed with multiplayer competition in mind, so it's great that the game gives you the option to take on up to three other players using just one cartridge, through the system's download play feature. You're limited to just a few different stages this way, though, so for best results, everyone should have a copy, and you can convince your friends to get their own by uploading a demo version of Meteos to them if you want. Multiplayer Meteos is functionally equivalent to playing against the computer, though it can inherently be more fun to stomp your friends instead of that damned eyeball.

There's a good amount of unlockable content in the game, too. What's neat is that all the meteos you send flying off the screen (except for incinerated ones) are actually tallied as a sort of currency for the game's unlockables, which include new planets, special items, music, and more. The new planets are probably the most exciting unlockables, since they translate into new riffs on the gameplay. The special items are interesting too, since they include stuff like bombs and hammers that can occasionally fall from the sky during gameplay, helping you clear the path or affecting the action in other ways. Meteos also tracks a ridiculous number of different statistics, helping make you feel like all your time spent with the game is contributing to something greater--especially since certain unlockables are tied to other metrics, like your overall time spent playing, and not just your number of meteos fired offscreen.

The game's visuals aren't dazzling, but they're clear and attractive for the most part. Some stages and their meteos look better than others, but overall, Meteos has a fun look to it that keeps up with the rate of the action. The various animated icons for all the different alien species are particularly appealing and show quite a bit of personality for being little bunches of squiggles. The game's audio fares even better, especially due to the eclectic musical score, which features different themes for every planet that all change with the tempo of the action. Meteos doesn't seem so remarkable in still images, but when you see and hear it in full effect, it'll seem a lot more exciting.

It's hard to imagine having much more fun than this, scribbling like crazy. One of the best DS games yet, Meteos delivers a unique and successful twist on the puzzle game formula. And, like any great puzzle game, it's something you can play for just a few minutes or for much longer periods of time and come away satisfied, regardless. 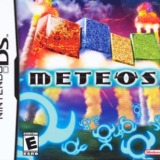