Triple Play Baseball is one of those rare games that really draws you into the experience with fantastic gameplay and quality graphics and sound.

Triple Play Baseball is one of those rare games that really draws you into the experience with fantastic gameplay and quality graphics and sound. While fans of Triple Play 2001 might not think that this year's offering is all that different, they will undoubtedly agree that this year's Triple Play is the best baseball game for the PlayStation.

Triple Play Baseball, which is being released without a year attached to the title so EA can let the calendar catch up to its naming convention, has all the features you'd expect. Several different modes are included, such as season, exhibition, playoffs, create a player, and a home run derby with targets. The game also has all the players, teams, and stadiums from the 2001 season. What makes Triple Play especially outstanding is that it is completely entertaining from start to finish. Whether you're at the plate getting ready to try to send one out of the park or sweating over a full count when you're on the mound, TP's gameplay mechanics, audio commentary, and ever-changing camera angles make every second rewarding and entertaining. The most engrossing aspect of the game is its gameplay, which is very well executed with traditional batting and an innovative pitching system. Triple Play features a pitching meter that simply makes being on the mound fun. You have to time the release of the button just right so you can maximize the speed of the pitch, but if you hold it too long, you'll end up throwing a wild pitch.

Triple Play's control scheme is simple and intuitive, making it easy for first-timers to jump right in and start playing. From there, you'll begin to learn the game's more complex controller commands through helpful little loading-screen tips that appear before each game starts. What's better is that even some of the game's more complex controller functions are incredibly intuitive and easy to execute during play, which makes playing the game all that more involving and rewarding. For instance, you can do things like bowl over a catcher guarding home plate in an attempt to knock the ball loose. You'll also have to watch out for collisions when fielding the ball, as fellow teammates might try and catch a pop fly in your territory, which could result in disaster. Overall, the game's artificial intelligence is fairly capable. In the game's harder difficulty settings, Triple Play is downright frustrating, making it a challenge for die-hard fans who want to test their baseball skills. The computer is always looking for opportunities to score or advance a base or two, so making mistakes is simply not an option.

Visually, Triple Play is a great looking PlayStation baseball game. The player models, while not terribly detailed, move very smoothly, and the game itself always clips along at a steady frame rate. You can recognize most of the major MLB stars and stadiums on sight, thanks to the decent textures used in the game. All the stadiums have been modeled after their real-world counterparts in fairly impressive detail. The animations of players diving, throwing, batting, and executing other moves look quite realistic.

The game's sound effects, music, and commentary are phenomenal, and they're all presented in Dolby Surround sound, which, if you have a home theater system that supports it, really makes a difference. You can hear the crowd chanting from all around you, the stadium announcer echoes as though you're at the game, and the action on the field sounds extremely crisp. The commentary is fantastic, with Buck Martinez and Jim Huson doing a great job of calling the plays as they happen and adding a bit of flavor to the game with constant quips and humorous ramblings that any baseball fan will appreciate. The music, which is a mix of all kinds of styles, is only present during the game's menu selection screens, but it's nonetheless very upbeat and entertaining.

Whether you're a hard-core baseball buff or just a casual fan of baseball video games, you'll find that Triple Play Baseball is an outstandingly fun game to play. It keeps you entertained every step of the way in just about every aspect a game can. Fans of Triple Play 2001 might not find the game revolutionary, but those who have been waiting for an outstanding PlayStation baseball game to come out will be more than pleased. 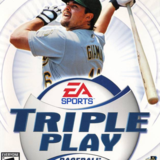