This gorgeous, overpriced action platformer is fun on your own or with a couple of friends.

Beauty may be in the eye of the beholder, but it's hard to imagine any beholder finding Trine to be anything but beautiful. Few 2D platformers have been rendered with this kind of visual grace. Elegant backgrounds bring Trine's fairy tale to life: Rays of golden light stream through dreamy forests, giant mushrooms glow as if lit from within, and ivy and brambles climb the walls of crumbling fortresses. This is the kind of world we imagined when we read storybooks and dreamed of far-off kingdoms and enchanted woodlands as children. A narrator intones each chapter in a soothing baritone and a glockenspiel chimes, setting the stage for a dreamy journey through a magical landscape.

The journey is not nearly as resplendent as the paradise crafted around it, but it is fun, assuming you can put up with some idiosyncrasies. Trine is a side-scrolling action platformer that can be played on your own, as well as with one or two friends in local co-op. If you play on your own, you switch between three different characters at any given time. Playing as the thief, you shoot arrows and swing about using your grappling hook (always a joy). As the knight, you bash skeletons and bats with your sword, though you won't be limited to just that weapon by the time Trine comes to an end. The wizard is the trickiest of the three. When easing into his velvet boots, you can create boxes and platforms out of thin air and move objects around telekinetically, but you don't have any immediate offensive skills--though it can be great fun to crush enemies by conjuring a box above their heads and letting it fall on them.

When you play on your own, only the character you directly control appears on the screen, and you leap, swing, and float your way from left to right, puzzling over how to get to your destination while bashing on the baddies that would hinder you. You need the abilities of each character to progress; as the thief, the grappling hook comes in mighty handy, while the wizard's conjurations are a real boon. You need the knight from time to time as well, and not always just to slice up skeletons. Often, there are multiple ways to move forward. You may be able to stack some boxes and planks as the wizard to bridge the necessary gaps, but the thief's hook may make swinging across the simpler solution. Either way, the platforming is slick and satisfying. There are obstacles to overcome--spikes, moving platforms, giant swinging axes, and so on--but the platforming isn't very challenging. Nevertheless, great animations and tight controls make jumping and swinging feel silky smooth, whether you are using the mouse and keyboard or a gamepad.

Likewise, the combat is unremarkable but enjoyable. When controlling the knight, fighting is mashy in a Diablo kind of way, but its simplicity feels like it fits within the equally simple story of a mysterious magical artifact and the three unlikely heroes it binds together. There is a helpful but rudimentary leveling up system that grants upgrades to your heroes' skills and combat prowess. However, you may find yourself occasionally wishing that undead archers would stop respawning and bats would stop fluttering around you so that you can leave combat behind and get to the more clever parts of the game. That's because Trine's best bits revolve around using physics to solve the simple puzzles that stand in the way of progress. This almost invariably involves using the wizard to swing suspended platforms to and fro; spin large wheels; and in later levels, hop on floating platforms and mentally move them--and yourself--to your destination. But as with other games based around physics-oriented puzzles (Little Big Planet springs to mind), you'll need to put up with some annoyances. For example, jumping on a big wheel and spinning it around using telekinesis isn't always as effortless as it should be, so things can get fiddly. This wouldn't be much of an issue if the wizard had unrestricted use of his abilities, but the limited energy bar means that you could come up against a literal wall when you run out of juice and have to run back to the previous checkpoint to replenish it.

Annoyances aside, Trine encourages you to throw ideas against it to see if they stick. Simply fooling around with the physics can be enjoyable enough on your own, but it's even better when you add one or two other players into the mix. You may not be accustomed to plugging a few controllers into your PC for some local co-op play, but Trine makes it a worthwhile act, given that the levels of fun rise when you have three players on the screen, each controlling a different hero. Here, the game takes on a distinct Lost Vikings vibe because you have to ensure that each character can overcome obstacles, assuming you play the game as it is designed to be played. The puzzles, such as they are, won't tax your brain. It's still really enjoyable to mess with the hanging platforms or jump on a plank and ask the wizard to ferry you across a chasm, using teamwork to make your way through the levels. It can be even more enjoyable to throw teamwork out the window, and cause grief for your teammates by inadvertently pushing them into a wall of spikes or doing something else that is funny and counterproductive.

It's a shame that some players won't even know that Trine supports cooperative play. The option is buried in the game's controller options menu, which was a foolishly unintuitive decision on the part of developer Frozenbyte. And once you do get your friends on board, you'll have to rise above a number of noticeable irritations. Player one can switch to any other character at any time--even one in use by another player. This can be frustrating, especially in two-player co-op. For example, you might mean to switch your character out with the third, unused hero, but you could end up switching to the character your buddy is using instead, which means he or she will transform into another hero automatically. This is a bad circumstance if he or she is playing as the knight and in the middle of combat. It also destroys what should be an extra challenge in three-player co-op because it removes the compulsion to find ways for the other characters to traverse obstacles. If it's easiest for the thief to cross a pit using the grappling hook, one player can do it first--and the others can then take turns morphing into the thief and do it too. You may also come across a bug or two, such as the one that causes the mouse pointer to disappear after all three players die, and will need to work around some stubborn camera issues in co-op play.

Trine is undoubtedly beautiful, and that beauty will draw you in from beginning to end. The visual magic doesn't translate into equally amazing gameplay, though the action and platforming are smooth and rewarding on their own--a few rough patches aside. At a lower price, purchasing Trine would be a no-brainer, but it sells on Valve's Steam digital distribution service for $29.99, a full $10 more than the upcoming PlayStation 3 version being sold via PlayStation Network. There are reasons to return after your initial play-through, including hidden secrets and, of course, fun cooperative action. Nevertheless, this five-hour offline experience will shortly be available on another platform for a lower price, which is a tough pill that PC enthusiasts shouldn't have to swallow. But lest all this nitpicking sound too negative, be assured that Trine is a fun and beautiful game that, despite its drawbacks, delivers a lively and refreshing jaunt through a spellbinding kingdom where fairy tales really do come true. 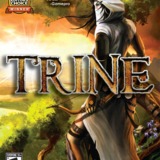