You don't need a surgeon's patience or precision to appreciate this quirky, inventive, very likable remake of a remarkable Nintendo DS game.

One of the most memorable Nintendo DS games released last year, Trauma Center: Under the Knife put you in the role of an up-and-coming surgeon who becomes embroiled in a series of surprisingly intense medical emergencies. So perhaps it's only fitting that such an unusual game would make the unusual transition from a portable game system to Nintendo's new console, the Wii. Trauma Center: Second Opinion for the Wii is essentially a remake of the original for the DS, featuring redrawn artwork, a redesigned control scheme that's a great showcase for the Wii Remote, some new story sequences and operations, and a really good subtitle. While this isn't the full-on sequel that a fan of the first Trauma Center would want, it's a refreshingly original, tense, and exciting game that embodies the Wii's promise of being able to deliver great, involving gameplay experiences over flashy graphics.

Those who've played the first Trauma Center game will already know Dr. Derek Stiles, a young surgeon who is fresh from having completed his residency. The game identifies Dr. Stiles as the story's main character, but Trauma Center turns out to have a lot of great characters in it, even though all the story sequences are told in a simple, rather old-fashioned way, using still images and text dialogue. Nevertheless, the story is engrossing, and broaches some surprisingly intense and serious material, from patients with suicidal tendencies to doctors who are morally predisposed to euthanasia--and that's just the beginning. The story goes way over the top as Dr. Stiles discovers he has the Healing Touch, an ability inherited from ancient Greek times. Meanwhile, a world-threatening epidemic is discovered and believed to be a work of bioterrorism. There's a lot of intrigue to this story, and the dialogue is well written to drive it forward plausibly enough.

All the anime artwork is nicely redrawn from the DS original and looks good, but from a graphical standpoint, Trauma Center: Second Opinion doesn't have any bells and whistles that couldn't have been found on, say, the Sega Dreamcast years ago. The game doesn't even allow you to run it in a widescreen progressive scan mode like most other Wii titles. However, Traume Center still has a nice sense of style to it, and the 3D surgery sequences feature just the right level of detail to make them a little unsettling or intimidating, without being gruesome. The audio is similarly understated but effective. There's not enough speech, but the few spoken lines of dialogue that come from the major characters help establish their personalities, and the quality of the voiceover is solid. Also, the game's sound effects and musical score fit the anime-style look very nicely. The music runs the emotional gamut, tensing up during an operation, and the scalpels sound like ninja swords.

When you're not experiencing the melodramatic storyline, you'll be in surgery, viewing the patient from a first-person perspective. Typically, you'll need to make an incision, fix the patient on the inside, and then close him up. As you might expect, though, operations can be quite different from one to the next. You'll have access to a wide variety of tools for getting the job done, including a scalpel, a drainage hose, sutures, a precision laser, an ultrasound machine, forceps, and more. On the Nintendo DS, you selected these by touching the edges of the screen, which resulted in a lot of back-and-forth tapping (unless you were crazy enough to try to play with two styluses). On the Wii, you use the nunchuk attachment's analog stick to access tools from a radial menu while keeping your other hand steady, concentrating on the operation. This is a significant reinvention of the Trauma Center control scheme; by requiring you to use both hands, it seems like a better simulation of the surgical process. Some well-placed rumble effects make the control scheme even more convincing.

For the most part, the controls have a great feel to them and could make a believer out of you if you're still on the fence about the Wii Remote. Surprisingly, one of the tougher parts of the operation occurs when you make that initial incision with the scalpel. On the DS, it was easy enough to draw a straight line, but on the Wii, it can be difficult to keep a steady hand and make a clean cut. This certainly isn't unrealistic, but it seems disproportionately challenging given that you'll go on to remove tumors and worse using simpler maneuvers. The Wii Remote feels responsive as you work away, and some of the tools are simulated particularly well. The best example of this occurs when you pick something up with the forceps: You have to press and hold buttons A and B on the remote using your thumb and index finger, much like you would to squeeze the tongs on the real thing.

Trauma Center: Second Opinion also features some new and redesigned tools that require you to do more than just point at spots on the screen. If a patient's heart rate stops, it's time to bust out the defibrillator, which you'll need to push down onto the patient's chest by moving your arm toward the screen. One of the new operations also has you mending a nasty compound fracture by moving and rotating pieces of bone so that they fit into place. The times when you have to work in three-dimensional space will be quite unlike anything you've ever played before, assuming this is one of the first games you play for the Wii. You'll need to get used to these parts, but the effort is worth it.

You'd probably expect a surgical operation to be hard work, and sure enough, Trauma Center: Second Opinion isn't easy. However, its level of difficulty seems better balanced than the very challenging DS original, especially because you now have several difficulty modes to choose from for each operation. You earn a rank that is based on the speed and precision with which you operate, and even at the easiest setting, it can be tough to earn above a C ranking, let alone successfully complete some of the later operations. Also, the story-driven nature of the game means that you're going to run into some unexpected events as you operate. This makes for some tense and exciting surgeries, at the expense of forcing you to go through some trial and error until you figure out what you need to watch out for and what you need to do. But even when you know exactly what's going to happen during a given scene, it's still challenging just to get the job done in time. You typically have five minutes for each surgery, and your progress is saved after each mission, so this is a good game to play in relatively brief stretches. At the same time, the controls don't require any wild motions, so you shouldn't feel worn out after playing for longer stretches.

Trauma Center: Second Opinion is divided into a series of scenarios within a series of chapters, with some occasional side-story sequences added to the mix. There are dozens of individual operations in all, so even though each one is short, this is still a reasonably lengthy game that makes you feel as though you've been through an awful lot since your humble beginnings. The action-puzzle nature of the gameplay and the ability to easily go back and replay any scenario at different difficulty settings invite some replay value, as well. Some sort of multiplayer component would have been a welcome addition to the game, but you still get some good value for your money here, especially if you've never played Trauma Center for the DS before.

This is about as unorthodox of a launch title for a new game system as they come, but then again, the Wii is pretty unorthodox too. So maybe it shouldn't come as any surprise that the game and the console make a great match. Trauma Center: Second Opinion isn't going to wow anybody with its presentation, yet it's got so much inventive gameplay and takes such a spirited approach to its subject matter that it still stands out from the crowd. 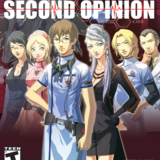