Dogfights in HAWX 2 can be exciting, but some dodgy AI and lackluster missions stop this game from being an air combat ace.

In air combat terms, the word furball is used to describe a densely populated dogfight. You'll find yourself in plenty of furballs in Tom Clancy's HAWX 2, and for the most part, they're tense, exciting, and rewarding. But these furballs don't always go down well. Inconsistent enemy AI and poor collision detection can mar an otherwise fun aerial fracas, and while the new non-fighter focused missions can be interesting, they simply feel out of place in this game. HAWX 2's faults may weigh it down and prevent it from reaching the stratosphere, but it still manages to soar at times.

One of the places HAWX 2 reaches decent heights is its narrative. Original protagonist Colonel David Crenshaw mainly takes a backseat this time around to let the focus shift onto three new hotshot pilots from the US, UK, and Russia. In typical Tom Clancy fashion, the plot is a country-hopping potboiler that mixes in Middle Eastern insurgents, the rapidly-becoming-a-cliche Russian ultranationalist forces, and a potentially devastating nuclear threat. There are even nods to other Ubisoft Tom Clancy franchises, such as Ghost squads, and you occasionally have to provide air support for them. Most of the story is told through cutscenes that take place in dark briefing rooms, through grainy satellite images, or via radio chatter midair while in the midst of a dogfight. Those aren't ideal ways to get the plot across, and the story does take its time to heat up. The eventual narrative payoff is solid enough, though, and you'll likely get invested in it long before the game's equal parts exciting and frustrating climax.

The game's missions similarly start slowly, with its first few forays content to spoon feed you the basics of HAWX 2's arcade take on air combat. Controls are easy to get your head around. It gets a little more complex when using advanced commands, such as ordering wingmen, but it never borders on the complexity of a sim. You get to fly 32 different planes from the US, British, and Russian forces, including famous ones like the F22 Raptor, Harriers, and several models of MiGs. Although there are subtle differences in speed and maneuverability among planes, they all feel responsive and fly quite well.

Novices may take a while to come to grips with the skills required to chase down other planes, but after a few missions, you can easily hold your own against enemy fighters. This is due to the fact that bogeys in HAWX 2 start off pretty dumb, seemingly content to fly in straight lines for easy missile locks. But the challenge rises significantly in the second half of the game, with enemies becoming much more acrobatic and aggressive. This leads to some exciting missions where the game's dogfighting mechanic shines through. It's a lot of fun to take on large waves of aerial enemies, pulling off insanely high Gs as you try to outmaneuver opponents. A high-speed flythrough of a fireball that was an enemy plane milliseconds ago is one of the greatest thrills an air combat game can provide, and HAWX 2 provides those moments in spades.

But by the end of the game, the difficulty spikes unevenly. You can be on the tail of a tricky opponent for up to five minutes or even longer, with the enemy firing off a seemingly infinite number of flares to throw off your missiles during the entire chase. It can get frustrating, especially at higher difficulty levels when your missile complement is drastically reduced. And because many objectives are time sensitive, having to waste time chasing and gunning down that flare-happy opponent can lead to plenty of failed missions. Thankfully, the game has a pretty good checkpoint system so you don't have to retry entire missions from scratch. You also get your full arsenal back when you retry a section, which is a welcome exploit that allows you to get past the tricky AI.

The game's sometimes poor collision detection is another source of frustration. This is particularly apparent when flying in the third-person view, as you find yourself in plenty of crashes after inadvertently flying too close to the ground, a mountain, or a cliffside when it looked like you had plenty of room. Normally, this wouldn't matter in a high-flying air combat game where your fighter plane has lots of room, but HAWX 2 features several missions where you have to navigate your plane through tight, constricted spaces (particularly in the final mission where it almost becomes throw-your-controller-against-the-wall worthy).

Flying and fighting aren't the only things you'll be able to do with your planes in HAWX 2; you will also take off and land in several missions. The controls for these are pretty easy to get the hang of, with landing the trickier of the two. If you're having difficulties with getting back on the tarmac, you can use the game's Enhanced Reality System to guide you in (the ERS made its debut in the original game as a visual guide to show you how to evade tricky situations, but its use here has been drastically cut back to landings and one specific mission). While it can be conceptually pleasing to see a mission through from take off to landing, it still seems like an odd addition to a game like HAWX 2. If you're an action fan, having to land your plane after just surviving an all-out aerial assault can feel like an anticlimax; flight sim fans will feel the controls are too simple to be any challenge.

The game's other attempts to get you out of the cockpit are just as ill fitting. HAWX 2 tries to break up the dogfighting action by letting you control unmanned aerial vehicles for surveillance missions and even gets you behind the turrets of an AC-130 for a very Modern Warfare-like death from above section. The UAV missions are fairly monotonous--you have to mark buildings, identify targets, and track vehicles to eavesdrop on phone conversations (and it's as exciting as it sounds). The AC-130 is the more fun of the two--if only for the sheer firepower at your disposal-- but even this is on rails and requires little more than moving a target reticle around.

HAWX 2 fares much better when it sticks to its core competency--fast-paced hijinks while in the fighter pilot's seat. It's not always about straight dogfighting, as the missions here feature some good variety. You have to pilot stealth ships using infrared, do close flybys of satellite dishes to identify radar-jamming sources, escape from a fiery airfield with no weapons while being tracked by bogeys, quickly switch from aerial targets to taking out ground defenses, run escort for naval, ground, or air allies, and much more. Despite some of the problems you run across with tricky enemy fighters, flying in a fighter plane rarely gets boring in HAWX 2. Playing through the game's 20 missions takes about 12 hours, but there's some good replay value to be found, thanks to an Arcade mode that has you replaying through the story missions while meeting specific challenges. There's also a Survival mode where you have to fight off waves of enemies and a Free Flight mode that lets you fly around the game's large maps without fear of getting into a skirmish.

Multiplayer options in HAWX 2 are more robust than in the original. As in the first game, HAWX 2 features drop-in/out co-op for up to four players, and you can play through either individual missions, through the entire story campaign, or even on Arcade mode levels. Playing through with friends is good fun, particularly during the more intense dogfights. UAV and AC-130 missions are not particularly engaging when done in groups--instead of taking control of different aspects of the vehicles (such as flight and weapons), all players will just have their own UAV or AC-130, which makes these missions incredibly simple to complete.

When it comes to playing competitively, HAWX 2 offers team battles where opposing planes aren't the only things you'll have to combat. Various targets--some static-like satellite installations and others dangers like naval frigates--populate the play fields and can be destroyed for extra points, but in most matches they tend to be ignored as players concentrate solely on taking each other out. Up to eight players can engage in dogfights, and these matches generally run pretty well online. The game also has its own perks system. As you earn experience points and gain levels by playing the campaign and online, you can unlock new planes and abilities (both passive and triggered) that can be used in competitive matches. These can range from cutting down the time it takes for you to achieve a missile lock, shortening the cooldown time for cluster bombs, increasing the damage your plane can take, and more.

HAWX 2 looks best when you're in the air, with the game's use of satellite images making the large areas you're flying in look quite realistic. Mountains, valleys, forests, and real-world locations, such as Moscow, all look great from a height, and it's not until you get closer to the ground that things start to look decidedly dicey. Flying in any lower than a few hundred meters reveals blocky trees, poorly defined structures, and plenty of low-quality textures. The game's cutscenes may not look as bad as the ground in HAWX 2, but they're not great quality either, thanks to stiffly animated character models. The planes are deservedly the stars here; they're all rendered in good detail and pleasing to look at in flight due to nice little touches, such as vapor trails streaming off wings or visual shimmers around exhausts. The sound, too, is a winner. The music reaches great bombastic heights during missions, and it's pleasing to listen to the various explosions, gunfire, missiles, and other effects.

While HAWX 2 tries to surpass the heights of its predecessor by bringing on more features and modes, the game only truly shines when it focuses on aerial combat. Imperfect as it might be, there's still plenty of fun to be had in blasting through the skies in pursuit of your enemies and getting involved in some serious furballs. Everything else is HAWX 2 just seems like a distraction. 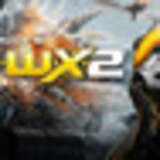