Jungle Storm is a decent enough vehicle for more Ghost Recon, if that's what you're after, but the franchise is really starting to show its age at this late date.

The Ghost Recon franchise returns to consoles yet again with a sort-of-new installment in Ghost Recon: Jungle Storm for the PlayStation 2. Why isn't it entirely new? Specifically, half of its single-player component and most of its peripheral maps have appeared in other Ghost Recons on other platforms. And, more generally, this is still the same old Ghost Recon that you've certainly played before if you're interested in this particular game to begin with. Jungle Storm is a decent enough vehicle for more Ghost Recon, if that's what you're after, but the franchise is really starting to show its age at this late date. The lack of originality and one particularly glaring multiplayer flaw make Jungle Storm less than exciting overall.

The storyline in Jungle Storm, as in all Ghost Recons, is of the typically Clancy-flavored international intrigue variety. It presents enough decent stuff to keep the missions moving, but it's not too thrilling otherwise. In the Island Thunder campaign, the story and maps of which appeared on the Xbox and PC ages ago, you're fighting through a near-future, post-Castro Cuba. The game's new 10-mission campaign, Jungle Storm, moves the action to Colombia, and it's nice that Ubisoft at least saw fit to create a new campaign for this game rather than just giving us the already-seen Island Thunder and the expected smattering of maps from previous games (of which Jungle Storm has many).

If you've played any of the Ghost Recon games, you know exactly what you're getting into with Jungle Storm. If not, the game is a slowly-paced tactical first-person shooter that has you controlling a squad of six soldiers (split into two teams--Alpha and Bravo) while trying to complete various mission objectives, such as securing an area, retrieving a sensitive item, or rescuing hostages. The damage model is realistic, so there's no run-and-gun going on here. You'll instead have to creep slowly, being extra watchful for enemies, as you approach your goals. You can switch between the six soldiers at any time, and the other five will be controlled by a pretty good AI system. In fact, your teammates will often beat you to the punch when it comes to spotting and taking out opponents.

Jungle Storm is fundamentally the same Ghost Recon you know and (perhaps) love, but at least there are a couple of minor new features in the game. There's now a little eyeball icon that pops up on your HUD to indicate how visible you and your teammates are to enemies. The brighter the eye, the easier it is for you to be spotted. However, you can reduce your visibility by moving slowly and crouching or going to a prone position. The area map has also been streamlined to make it easy for you to direct your teammates to new positions on the map. If you'd rather actually bark your orders, Jungle Storm also features voice recognition (with a USB headset) that you can use to switch teammates, direct allies to new areas, and give other orders. The voice recognition very adeptly detects your commands and rarely gets them wrong, so it's actually a useful feature during gameplay, instead of being a tacked-on novelty.

Aside from a two-player split-screen option, there's a pretty full-featured online multiplayer mode in Jungle Storm, which will probably be its biggest draw to most people who play it. You're limited to eight players, so unfortunately, you can't have any full six-on-six matches, but at least there are a lot of modes to select from. There are several cooperative game types against AI enemies; a multitude of team games, like Last Man Standing and Hamburger Hill (which has your team trying to dominate a specific area of the map); and a few every-man-for-himself modes, such as standard deathmatch and "Mouse Hunt," which is sort of like a kill-the-man-with-the-ball game. The multiplayer gameplay is as slow and staid as the offline stuff, so it doesn't have the frenzied excitement of your average online shooter, but it's decent enough for those who are into that sort of thing.

Supposedly, Jungle Storm contains online voice chat, but in the retail release of the game, this feature is disabled by default. Regretfully, there's no mention anywhere in the game or manual as to why this is the case, nor is there any mention regarding how to enable voice chat. After a week of angry gamers' complaints, Ubisoft posted a backdoor solution to the problem on its Web site, claiming that voice chat was disabled in the game to ensure a smoother online play experience. Without headset support, there's no way to communicate with your allies in an online game. Now the only way to use this feature is to input an undocumented code at the title screen and hope that the host of your online game has used the code as well. You can find this code in our hints section for the game. Why couldn't Ubisoft have simply included a voice chat toggle in the options menu, with a warning that its use may negatively impact your network performance? When the voice chat does work, it works fine, but initially burying this feature was a very poor design choice on the part of the developer, because teamwork is key in this game, and being unable to communicate with your team makes working together more difficult than it should be.

Looking at Jungle Storm, it's obvious no special effort was paid to the visual presentation. The graphics are awfully dated by any standard, and they haven't improved much, if at all, since the original Ghost Recon was released in 2001. The backgrounds lack any great detail and appear flat, on the whole, though the character models are reasonably well detailed. There's not much to the sound design either. The sound effects, such as gunfire and explosions, are pretty much the same as in the previous entries in the series, and the voices are serviceable but aren't particularly exciting.

If you're a Ghost Recon fanatic who can't get enough of the series, Jungle Storm definitely has something to offer you with its one new single-player campaign and wealth of multiplayer features, but this is really the same game we've been playing for close to three years now. It's also an aesthetically bland game, and the multiplayer implementation, though decent overall, is questionable in some aspects. With Rainbow Six 3 (another Clancy FPS that's both more modern and more exciting) headed to the PS2 any day now, players who just want a tactical shooting experience would be advised to consider both games before making a decision. It's not a truly bad game, but as dated as it is, Jungle Storm is a little hard to recommend at full price. Ghost Recon nuts will be happy with it, but others should approach it with some caution. 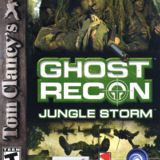