Though Ghost Recon purists may find a lot to complain about in the sequel's entertaining but shallow single-player campaign, they should ultimately be mollified by the terrific multiplayer game.

Depending on their tolerance for change, fans of the first Ghost Recon may be sorely disappointed by the sequel, at least at first. That's because Ghost Recon 2 makes some fundamental changes to the original. Luckily, these changes turn out to be mostly for the best. What was a slow-paced, squad-based tactical shooter along the lines of the Rogue Spear series has been transformed into a more straightforward action game set in the Ghost Recon universe. People who will probably enjoy the sequel: anyone who didn't play the original, anyone who played the original and didn't like it, and anyone who played the original, liked it, but then either can't remember why they liked it or can remember but are willing to keep an open mind. It's a good single-player shooter with a terrific multiplayer component.

The most immediate, noticeable change is in perspective. Ghost Recon was a strictly first-person affair. It was so decisively first person that you couldn't even see your weapon. Part two is, by default, third person. It's kind of a matter of taste, but the slightly pulled-back perspective offers you a wider line of sight; think of it as a peripheral vision simulator. The third-person viewpoint is also helpful for navigating the game's new precision-jumping puzzles. Just kidding. As in the original, there isn't even a jump button, though you can click the left thumbstick to climb over waist-high obstacles. The shift in perspective isn't as big a deal as it might seem to be, since you can revert to the classic weaponless first-person view at any time. When hosting multiplayer matches, you can even require everyone to play in first person.

The bigger change is to your squad. Ghost Recon put you in command of two teams of three soldiers. You were able to build the team from a roster of available operatives before each mission. Inside the mission, you could give orders to the squads through an overhead map, though you could also directly control any single team member at any time. If the character you were currently controlling died, you could simply switch to another team member. Surviving team members gained experience at the end of each mission.

The sequel does away with that mechanic almost entirely. As in a more traditional shooter, you now control a single character. If he dies, it's game over. You're still accompanied by a squad, but this time around it's a single team of three people, and you don't directly control them. You can, however, give them general orders such as flank left, flank right, advance, hold position, regroup, and suppress. You can also give them context- sensitive orders when the aiming reticle is over a relevant object. For instance, when your gun is pointed at an enemy vehicle, a single button press will order your squad to destroy it. All orders are given to the entire squad rather than to a single soldier. When a situation comes up that only requires the attention of one person, the game will then determine what team member is best positioned and equipped to deal with it.

The artificial intelligence that governs your squad's behavior is generally good. They're great at spotting enemies and then taking them down. And they almost never get stuck or get in your way--something that was a problem with the original, especially in some of the indoor areas. Part of this boost in intelligence may be a side effect of the fact that the sequel does away with indoor locations altogether. Your squad is so good at its job that the command interface is almost entirely superfluous. For the most part, your best tactic is to let them follow you around and just shoot at whatever catches their fancy.

The single-player campaign unfolds across 15 long missions through near-future North Korea, where a rogue military leader is getting stupid with a nuclear bomb. The missions offer plenty of action and a standard variety of advance, defend, and escort tasks. There's also a nice mix of sneaking through the underbrush and participating in large-scale battles alongside friendly soldiers who aren't part of your squad.

Because they're mostly linear and because your squad now operates pretty much autonomously, the missions don't require a whole lot of tactical thought. However, the realistic damage and aiming model are still intact. You're vastly outnumbered, so you'll at least need to approach each mission methodically, moving from cover to cover while keeping an eye out for enemies hidden in the trees. Simply running toward a single enemy while indiscriminately spraying bullets will get you killed in a big hurry. Unlike a lot of recent squad-based shooters, your teammates can take damage and die (though, unlike the original, they don't gain anything for surviving), which adds an extra layer of tension to the single-player experience. You can save at any point, though, so if you don't want to continue minus one friendly, you can simply reload a recent save. The load times are surprisingly quick, especially considering how big most of the levels are.

Most of the missions are set in some kind of jungle, though a few take place in urban environments. The visuals for these environments are markedly improved from the original. There's a lot more foliage, and it looks and moves much more believably this time around. About the only visual disappointment are the enemy animations. Hostiles show little reaction to being shot. When dropped, they look less like they've been rocked by a forceful blow and more like they've simply decided to gently lie down and take a nap. Sound effects, on the other hand, are great. The ambient sounds of battle are forceful and varied, and they add a real sense of chaotic danger to the firefights.

All but three of the single-player missions (there are three missions in the campaign where you're not accompanied by your squad) can be played cooperatively with up to four people split-screen, through system link, or over Xbox Live. The cooperative mode, especially over Live, is a blast and it's worth the price of admission by itself. You can also set up several variations on the single-player missions in which you must infiltrate points on the map armed only with a silenced pistol, kill every enemy, or defend a position for 10 minutes.

The competitive multiplayer modes are great as well. Five basic modes are available: domination (a capture-and-hold variant), hamburger hill (king of the hill), various flavors of deathmatch, search and rescue (each team tries to escort wandering medics back to their base), and siege (one team defends an area while the other team attempts to infiltrate it). There are a huge number of available options to tweak within each of these games as well. Permanent clans (called "teams") are supported, as is the creation of official team competitions. It's obvious that the developers put a lot of thought into implementing the online component, and it's nearly as fully featured as the current high watermark set by Halo 2. In fact, the jungle setting and the methodical, realistic gameplay actually make it more of a complement to Halo 2's fast-paced action rather than a direct competitor.

Though Ghost Recon purists may find a lot to complain about in the sequel's entertaining but admittedly relatively shallow single-player campaign, they should ultimately be mollified by the terrific multiplayer game. It hasn't been "dumbed down," but rather improved in every conceivable way. 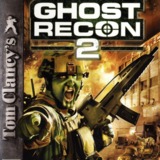