Tinykin is a delightful callback to '90s collectathons and platformers, with just the right amount of new ideas and iterations.

As we grow up, we not only forget how it feels to be small, but also forget how it feels to exist in a world that's unfathomably big. For many of us, it's hard to retain our inherent sense of childlike wonder and our ability to see the extraordinary in the mundane. For this reason, I'll always harbor a special affinity for the things in life that do--the things that remind us of just what it's like to feel small, yet boundless. Splashteam's Tinykin is one such thing.

While at first glance Tinykin seems like a Pikmin clone, it'd be a disservice to write it off as such. Sure, the puzzle-platformer does share some elements in common with the Nintendo series (chiefly the helpful little creatures that give each game its namesake), but above all else, Tinykin is a collectathon that will charm anyone who put countless hours into Banjo-Kazooie, Spyro, and other '90s platformers. And this isn't the only quality that inspires a return to childhood--it also is set in a '90s style home that seems positively massive in the eyes of our pint-sized protagonist Milodane. With larger-than-life environments brimming with detail, life, and wonder, simple-yet-fun mechanics, and satisfyingly rhythmic gameplay, Tinykin is an original and exuberant experience.

Tinykin's story begins when Milo crash-lands on planet Earth. Unfortunately for Milo, this derails his current mission, and starts him on a new one to build a new ship so he can once again return to orbit. Fortunately, however, this 90s suburban home is filled with lots of friendly faces and happy helpers in the form of bugs and "tinykin." Tinykin, as the name suggests, are adorable little creatures that are always eager to be of help--which is particularly useful, considering the science-minded Milo's sole abilities are using his glider to traverse short distances, and sliding around on levels on his "soap-board."

Throughout your adventure, you'll encounter five different types of tinykin, each with their own unique power that can be utilized to solve different puzzles. Red tinykin, for example, explode upon being thrown into an object. While a bit sad if you think about it too long (or at all, really), it's certainly of help when freeing other tinykin from cages, blasting holes in walls, or breaking the posts that keep ropes from touching the ground. And if it makes you feel better, the red ones are the only kind that uh, can only be used once.

As you explore each level, you'll acquire a plethora of tinykin and stumble upon countless obstacles that require you to have a specific number and kind to continue. This leads to a satisfying back-and-forth, as you find creatures, unlock a new part of the map, identify the next "locked door," and then search the current area to find more tinykin. Despite the sizable maps, finding tinykin and the areas you've yet to explore is fairly easy thanks to the other collectibles and missions located throughout the level that help guide you to where you need to go. Most bountiful are the game's pollen clusters, which you can use to then give to a merchant in exchange for improving how far your glider can go. This ultimately allows you to access previously out-of-bounds locations and, you guessed it, collect more pollen, tinykin, and other collectibles. It's the kind of rhythmic gameplay that reminds me of the '90s platformers I referenced before, and with simplistic controls and quality of life features that keep the game fairly easy (such as simply being sent to whatever surface you fell off of when you meet your demise), it's extremely smooth to play and friendly for players of all ages and skill levels.

As you leave each level, the tinykin you've collected stay put, as they are "not the bravest'' according to your friend and mentor Ridmi, and don't like to leave home. Which, I mean, same. However, this is not the only thing that makes each level feel distinct. Each of Tinykin's six areas are inhabited by a different species of insect, feature their own unique color palette, soundtrack, and are set in a different part of the house. The Waters of Balnea, for example, is set in the house's restroom, features some fantastic, jazzy tracks, a cool-toned palette punctuated by pops of bright violet and neon blue, and plays host to two different types of bugs: the no-nonsense beetles (led by Partypupa, naturally) and the party-hardy silverfish. As you can imagine, cohabitating isn't the easiest for these invertebrates, which leads to our hero Milodane having to intervene on more than a few occasions.

However, the levels never feel excessively bogged down by characters or side-quests. Sure they exist, but you don't necessarily have to talk to every creature you stumble upon--though you're in for a few treats if you do. Among my favorite easter eggs in the game, for instance, are a couple named Jack and Rose (who ask for you to give one another a risque sketch and large board to float on) and a chef named Remy. Rather Tinykin forgoes diving too deep into story in lieu of letting you partake in wondrous exploration, gathering up random objects, solving puzzles, and traversing mountains made of toilet paper and vinyl records as you do. While I imagine you could beat the game in under four hours if you did only what was required of you, each level was engaging enough to hold my attention for well over an hour as I tried to find every last secret tucked away within them.

Another key part of what kept me exploring is simply how beautifully designed and intricate the levels are. The game's art style--which features 2D characters atop vibrant 3D backgrounds--is delightful, and how abundant each level is in verticality and little hideaways creates a world you love to traverse. While not as vast as your modern day open-world RPG, there were so many moments of "oh, I can go there" that I wasn't necessarily expecting. There also comes a point where you begin to feel a sort of immense satisfaction in getting to a place perhaps not in the way the game intended by using tinykin or flexing your platforming skills.

If there's any place Tinykin stumbles, it's in how frequently you might actually stumble. Considering the game is predominantly a platformer, it can be grating when the controls aren't always the tightest and you find yourself tumbling off a platform because you didn't hit the exact spot you intended to. Thankfully, numerous checkpoints and how forgiving the game is with your fall alleviate some of that tension. I also found myself frustrated at times by how precise you need to be to talk to NPCs. While so much of the game is smooth and seamless, I would have to stop and get into position in order to interact. Because the story is tertiary to the gameplay and overall experience of Tinykin, this wasn't egregious, but I can't help but think maybe I would think more highly of the bare-bones story (or perhaps find it less bare-bones) if interacting with these characters felt easier.

However, as an experience, Tinykin is anything but lacking. The collectathon is a delightful callback to '90s platformers with just the right amount of new ideas and iterations on pre-existing ones. Its charm, light-hearted humor, impressive level design, and overall tone create a game that feels both nostalgic and new, and perfectly captures the exuberance of gaming as a wide-eyed kid. 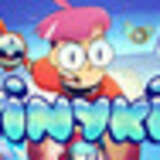 Jessica spent around seven hours in the wondrous world of Tinykin. She played the game on Switch with a code provided by the publisher.