In almost every other way, Thunder Force V delivers.

OK, Saturn owners, take note: Everyone's favorite Genesis shooter series has returned, and Thunder Force V is a more than worthy sequel to the intense side-scrollers that have captivated 16-bit players since the Japanese Mega Drive was released in 1989. There's a catch, though: TF5 is only available in Japan, and there are no plans to bring the game to the States. So if you want the game you'll probably be forced to import it sooner or later.

The Thunder Force games are known not only for their terrific aesthetics and stunning artwork, but also for their exciting stages and the intense and strategic side-scrolling gameplay that makes the game highly challenging. Traditional Thunder Force fans might worry that Technosoft will follow recent trends and push the classic game fully into the third dimension. But that isn't the case: TF5 is still a side-scrolling shooter to the core, though Technosoft has used the Saturn hardware to fluidly animate most of the game's spacecraft as real-time 3-D polygonal models and occasionally, during cinematic scenes, shifts the camera angle for dramatic purposes only. The only 3-D feature of the gameplay is the subtle presence of both foreground and background layers; enemies flying in the background can only be shot when they zoom in to the foreground. It's confusing the first time you play, but as lock-on squares appear whenever objects can be shot, it's not confusing for long. For the most part, Thunder Force V's visuals are only a step short of stunning, neither as dramatically three-dimensional nor as obviously hardware-pushing as pseudo 3-D shooters Taito's RayStorm and Galactic Attack (Layer Section). Envision instead a 16-bit side-scroller with a mix of simple 3-D and 2-D background objects, all presented with pleasant resolution and color palettes - and plenty of gunfire and enemies who move with more dimensionality than the Genesis could ever hope to handle. Thunder Force V's sole flaw is a noticeable frame rate drop whenever the Saturn tries to animate too many 3-D objects onscreen at once. Thankfully the problem is truly infrequent, but it's frightening enough on first appearance to rattle players used to seeing visually flawless scenes in their TF games. But great weapon beam and electricity effects, as well as wild bosses and excellent enemy models, more than compensate for the game's one visual shortcoming. In almost every other way, Thunder Force V delivers. With the exception of the more prevalent use of 3-D enemy movement, a limited form of which was seen in a scene or two in TF4, TF5's gameplay is remarkably similar to - yet better than - its predecessors. Before, two CRAW units circled your ship as you flew and added firepower; now there are three, and they do even more. Choose from five weapons, and each has a second level of power that can only be used before the energy in all three of your CRAW units is depleted. Unlike most side-scrolling shooters, you have opportunities to strategically shoot upward, downward, diagonally, and both forward and backward as you fly to the right, and three continues make the game last for a good long time. Halfway through the title, Technosoft throws a major surprise into the gameplay, beefing up the intensity level and weaponry in a dramatic confrontation scene. The sound effects and music are spot on throughout, adding digital quality to many of the familiar TF samples and powerful synthesized techno-rock themes. There's an added bonus for TF5 investors, as well: The game includes a bonus music CD with reasonably remixed tracks from the previous TF titles, though I wouldn't call the remixes incredible. Now if only Technosoft had made a more coherent and higher-quality opening movie to go along with the rest of the package... If you want to play Thunder Force V any time soon - or perhaps any time at all - you'll probably have to import it. Luckily, the import is safe for all audiences, as the game is entirely in English.

All things considered, I would go so far as to highly recommend TF5 as a good investment with the sort of old-school challenge that most companies have forgotten about. For me, there haven't been many must-have games for the Saturn in its short lifetime, but Thunder Force V is one game that I'd definitely put on my list. 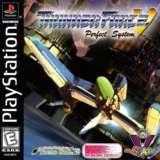 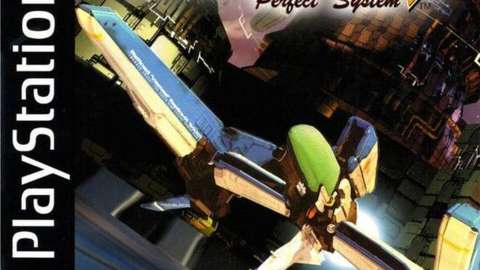 Easily as good as Raystorm or G-Darius and tough competition for Einhander, Thunder Force V is a shooting fan's dream.