Some games are just likable. Take The Weaponographist, for instance. This top-down dungeon crawler doesn't do anything in an obviously outstanding way. At a glance, you've got a standard, forgettable, dumb Gauntlet clone: nothing more, and nothing less. But the game's speedy pace, stiff challenges, wide variety of monsters and weapons, weapon and skill gimmicks, and loads of old-school cartoon charm hook you. I started off the game yawning. I wrapped things up many hours later with aching wrists (you absolutely need a gamepad here, so don't even bother trying the keyboard option) and a smile on my face.

A big part of the game's appeal is its refusal to take anything seriously. In the solo campaign (there are no multiplayer options other than the ability to check your timed scores online against other players), you play Doug McGrave, a demon-slaying stud in shining armor. As he's wandering around the countryside in the opening cutscene looking for new challenges and new sources of filthy lucre, he encounters a witch who pleads for help stamping out a demon infestation. She's broke, though, so Dougie isn't interested--at least, not until she whips out a vitality- and weapon-withering curse that soon convinces him that he should try slaying evildoers for charity.

All of this is played as a send-up of the traditional role-playing epic, with Doug looking like a cartoon superhero right down to his big, bumper-like chin. The visuals have been taken straight from an old-time cartoon. Both the cutscenes and the in-game graphics come off like lost clips from the Hanna-Barbera shows that aired on Saturday mornings in the 70s. The audio is just a shade smoother than the bleeps and bloops of the 16-bit era, giving the game even more retro allure. Visuals and sound combine to set a light, carefree mood that adds a lot to the overall experience of exploring underground dungeons and murdering all the inhabitants. The writers don't try too hard, either, so you don't have to deal with groan-worthy puns or the obnoxious, unfunny joking too common in games.

Gameplay isn't quite as enjoyable as the setting and story, but it's close. The Weaponographist sticks to the traditional hack-and-slash RPG formula. Doug ventures into multiple dungeon levels (called depths), each loaded with numerous close-quarter rooms that serve as battle arenas. A couple of save points can be found in each depth, letting you save progress midway through and then again before the concluding boss battle. Rooms generally work as follows: You walk in, the door closes, you don't get out until you kill dozens of creeps.

A big part of the game's appeal is its refusal to take anything seriously.

Monsters are played for laughs, as with the overall cartoonish visuals. The wide-ranging rogues gallery consists of demons in all manner of weird forms. There are lions with whips dressed as circus lion trainers, leprechauns with deadly yo-yos, dark elf archers, Ents with slingshots, and more. Each depth features a handful of new creatures with new weapons. All the weapons can be picked up and used against the bad guys, which livens things up as you proceed deeper and deeper into the underground labyrinth of evil. It's all more than a bit surreal, but the creatures are too broadly drawn and colorful to be outright creepy. Art direction that was slightly more adult would have made this a disturbing, nightmarish experience.

As noted above, the witch's curse decreased the durability of Doug's weapons and his skills as a warrior. So every sword, whip, machine gun, spear, and so forth comes with a lifespan that ticks down on a meter on the lower left side of the screen. When your weapon crumbles, you're stuck duking it out with your armored fists, making it imperative to scrounge something else as soon as possible. Magic weapons can be equipped to launch powerhouse attacks. Rings of fire can be summoned up with the magic staves left behind by slain wizards, for example, and the tubas dropped by marching-band goons can be used to fire Death Star-like laser blasts.

Speed is of the essence as well. Doug's curse makes him get weaker whenever he isn't killing monsters, with his strength shown on a combo bar. Slack off on the murderousness, and the bar quickly starts to empty. When it completely runs out, Doug starts losing experience. So it is imperative to get on and stay on a roll where you are constantly killing foes. Do this, and Doug gets into a rhythm where he is regularly leveling up and staying just ahead of the increasingly tougher mobs of bad guys that stock each new dungeon chamber. Fall behind on the slaying, and everything quickly gets tougher and tougher, with the end result being that you become overwhelmed by the sheer number of enemies.

Both elements have a big effect on combat, turning it into a fitting blend of speed and strategy. Constantly running and killing is key to everything, although you must also be careful about what weapon you pick up. Some just don't work very well against certain foes, and others are wildly underpowered or a poor fit when dealing with numbers of enemies. The chainsaw, for instance, is practically worthless in swarms of monsters due to how slowly you maneuver it. On the other hand, weapons like the zippy whip are almost too powerful given how fast you can deal out damage while racing around.

A bit of luck is involved here, too, because you can get stuck in some rooms without a good weapon for so long that you might as well just lie down and die. Enemy buffs that speed up monsters or cause balls of death-dealing slime to bounce around rooms can also pop up, making life even tougher. A combination of these apparently random special effects and crap weapons can end Doug's dungeon delving in a hurry, even if you keep up your combo meter.

When your weapon crumbles, you're stuck duking it out with your armored fists.

The action gets repetitive, however. Combat involves doing the same thing over and over again while slightly adjusting your approach to deal with different types of enemies. Depths are tough in the early going, meaning that you have to replay rooms on a regular basis. I found that I had to die a number of times in the first rooms of each depth to trigger a respawn back in the village hub, where I could spend the demon goo acquired from vanquished foes on buffs for weapons, magic gear, and so forth. I had to build Doug up in this way in pretty much every depth, having to die on at least three or four occasions before I was tough enough to start overwhelming the opposition. Be prepared for a fair amount of grinding.

Despite its reliance on a familiar formula and some repetition, The Weaponographist is a dumb, fun arcade romp due to its quick pace and interesting concepts governing weapon use and skills. This is one of those friendly games that just about anyone would enjoy picking up for short play sessions every now and again, especially those who like their dungeon crawlers tinged with a sense of humor and a retro flavor. 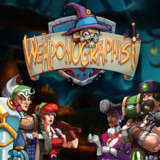 A dozen or so hours later and Brett's no smarter, but his wrists hurt a whole lot from the merry mayhem in The Weaponographist.