The Swords Of Ditto Review: One Good Turn Deserves Another

As games continue to grow in scope and complexity, there is something to be said about the light-hearted, compact RPG stylings of The Swords of Ditto. It mixes childlike cartoon visuals and a delightful soundtrack with light puzzles and simple-yet-challenging combat. And while it doesn’t offer anything particularly groundbreaking to seasoned RPG or roguelite fans and backs you into a wall in some confusing ways, the intuitive nature of its systems, along with the inclusion of local two player co-op, makes The Swords of Ditto a fun leap down the rabbit hole into saving a strange and ever-changing cursed town.

The main loop of each playthrough is simple: Wake up, gather a sword from its resting place in the town of Ditto--either from statue or in the graveyard--to become the hero, then seek out the Toys of Legend to destroy the Anchors that the villain Mormo uses to strengthen her grasp on the world, making her easier to defeat in the final confrontation. If you die before then, Mormo wins and Ditto lives under her rule for another 100 years before the new Sword of Ditto is awakened, and the cycle continues. If you succeed, Ditto lives in peace for 100 years until Mormo returns, and it all happens all over again. Getting the hang of this can all feel a little overwhelming at first, but any confusion quickly slips away as the game’s rhythm settles in, and it doesn’t take long to feel comfortable with what’s expected of you.

Co-op play is local only, but the drop-in, drop-out system makes it very easy to have another player come and go at any moment. It also changes up the dynamics of play fairly significantly. Enemies are stronger, as you’d expect, meaning some enemies require a more tactical approach to take down. Items are shared between players, which can put a sudden strain on health items if you’re both struggling to deal with the added difficulty. Thankfully this is alleviated somewhat by an increased item drop rate, so health items can be replenished nearly as quickly as you go through them.

The entirety of the explorable areas are made up of individual sections that are pieced together at random for each playthrough. When out exploring the world, there’s plenty to find and keep you busy. In Zelda-like fashion, you can slice up grass to score more coins or health items. One standout touch: If the weather is dry, you can torch a field of grass and watch it all go up in super-satisfying fashion. Random shops, caves and houses filled with cute and interesting characters dot the world, and while some only share a few repeated lines of dialogue, others offer quests for items or keys to unlock dungeons in other parts of the map. Almost everywhere you look there’s something else to see and do, and it’s this sense of discovery that's felt when finding these hidden gems that makes The Swords of Ditto so rewarding.

Combat is mechanically straightforward; you can perform a simple melee attack with your sword as well as a roll dodge, and you have four interchangeable gear slots for items or weapons that are accessed using the d-pad. You can also buff your character by applying stickers that you find around the world or purchase within certain shops. It’s all fairly rudimentary, but despite the combat’s relative simplicity the enemies are a huge challenge, and this is where it gets gratifying.

Each foe has its own unique way of attacking or defending, and learning this for each enemy will make you much more effective at taking them down. The three-headed fireball will, if it touches you, turn your sword attacks into healing slashes for a few seconds, forcing you to retreat before the effect wears off. The green slime-ball monster falls harmlessly apart when physically attacked--it'll only taking damage when it’s set on fire. It takes some time to learn all of this, but when you do, combat feels much more satisfying. You become more capable of clearing large groups of monsters than if you’d just kept slashing away, and having to think each encounter through makes it all the more enjoyable.

While it needs a little refinement, The Swords of Ditto is sure to delight, whether played on your own or with a friend.

Dungeon puzzles are also relatively simple yet engaging. Some involve coloured switches that rearrange the room entirely, altering your path and the enemies within. Some rooms simply involve killing all the enemies to make a key or a chest appear, while others are increasingly more elaborate and labyrinthian. It’s not unusual to come across a room that demands you place a multiple runes in slots that only appear when a certain switch is triggered, all separated by large chasms, locked doors, and rows of floor spikes. Later rooms will combine all of these variables into one, adding a light complexity that manages to keep things breezy and enjoyable.

Alongside the puzzles, each dungeon submits to the Isle of Trials rules--a set of modifiers that changes the rules of how each dungeon works. Early dungeons will only have one or two of these applied, but later playthroughs will throw upwards of four, and they could be anything from negating poison to activating auto-health-regen while prohibiting the use of consumables. These modifiers keep the game and the dungeons feeling fresh, especially in subsequent attempts, offering new challenges that unpredictably swing things either for or against you.

It’s not a game without issue, though. Even while playing on PS4 Pro, The Swords of Ditto can be prone to quite a bit of slow down and stutter, mostly when there are lots of items strewn about. I also had a couple of triggering issues that would block my progress, meaning I had to quit to the menu and reload the game to reset the room. But the biggest problem is the time limit that’s enforced for each playthrough. You are only given a handful of in-game days--which changes depending on difficulty--to explore, gather resources, and complete quests before being forced into confrontation with Mormo at the end of the final day. Not only that, it feels like the days are too short, making some of the more elaborate discoveries difficult to fully engage with in a single playthrough.

While you can unlock the ability to rewind time by collecting enough of a particular type of item and taking them to a shrine, you have to collect yet a second currency to purchase them on top of that. Given that some of the items required for these longer quests are lost with a new character, It feels like you should have this ability to purchase rewinds from the start. This would have given me more confidence to explore more of the game, instead of keeping one eye on the days remaining and the other on whatever tasks are left to complete.

The Swords of Ditto is nothing short of a light-hearted good time. Despite a few bumps getting in the way of progress and some misgivings about the forced time limit per playthrough, it’s still a joy to slash through enemies and collect items while humming the game’s ear-tickling soundtrack. Meeting oddball characters and watching the world react to past playthroughs is a wonderful exercise, and pushing through the game’s barriers to exploration feels rewarding every time. While it needs a little refinement, The Swords of Ditto is sure to delight, whether played on your own or with a friend. 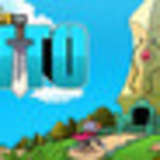 James Swinbanks is a game reviewer by day and cartoon superhero by night. He spent 35 hours with The Swords of Ditto across PC and PS4, using codes provided by Devolver Digital.