You can't break away.

I have always been someone who wants to go the "wrong" way first in games. When I sense that a game is trying to usher me down a particular path, to get me to run from left to right or maybe to charge straight ahead, I need to satisfy my instinct to go against the grain, to explore, to see what the designers have put back the other way. Sometimes I find a 1-up or a collectible stashed away to reward me for my intrepid behavior. At other times, my explorations are rewarded only by the crushing disappointment of running up against an invisible wall. Whatever I find or don't find, my action is a manifestation of my desire to exert some independence, to make my own choices within a system that severely limits my options and encourages certain, specific behaviors.

In The Stanley Parable, you control Stanley, aka employee #427, a cog in a machine, an employee in a system that offers him no options and demands certain, specific behaviors. He sits in his drab, tiny office, waiting for orders to appear on his screen telling him which buttons to push, and then pushing those buttons. Then, one day, the orders stop coming, and he is confronted with freedom, or at least the illusion of it. You take control of Stanley and walk down a hallway as a haughty narrator comments on what Stanley is thinking and feeling about this strange new circumstance in which he finds himself. Then, you come to a room with two open doors.

"When Stanley came to a set of two open doors," the narrator says, "he entered the door on his left."

It's a choice. A real choice, made all the more fascinating by the fact that the game, via the narrator, explicitly communicates its expectations to you. Do you cooperate with the narrator, letting the story he wants to tell play out? Or do you go the "wrong" way, seeing what awaits down the hallway on the right? No matter what you do, here, as in most games, exerting true independence is impossible. You are operating within a severely limiting system that others have created. You can play into its expectations or attempt to defy them, but either way, you are engaging in behavior that the system allows, moving through environments that others have constructed with you, the player, in mind. No matter which way you go in The Stanley Parable, you are confronted with choices again and again. And again and again, the narrator communicates his expectations to you. When the narrator tells you that Stanley walks straight ahead into the room marked Mind Control Facility, do you follow his narrative lead, or branch off to the left, down the hallway marked "ESCAPE"?

It's an experience that makes you reflect on the nature of choice in games, on how games that purport to offer choice almost always offer only an illusion of choice. You might find the narrator commenting that you made a choice that you shouldn't, by design, have been able to make, or you might make your way to an area that the narrator claims you were never meant to see. But of course, the very fact that there's recorded dialogue commenting on these circumstances makes it clear that these are situations that the designers planned for and wanted you to discover.

The Stanley Parable feels alive in its responsiveness to your choices and its desire to subvert your expectations and keep you on your toes.

But it's not the fact that The Stanley Parable makes you think about the nature of choice in games that makes it extraordinary. It's the fact that it does so while simultaneously managing to be a wildly entertaining, hilarious, and surprising experience that satisfies your yearning to go off the beaten path and to make impactful choices even as it makes you question how much freedom you ever really have in a game.

As you make your choices, going along with the narrator's expectations or defying them, his commentary constantly has you in stitches. It's particularly amusing to listen to him as he insults Stanley (or just as often, you, the defiant player) when you don't follow his instructions. Spend a bit of time dawdling in a broom closet that offers you nothing to interact with, for instance, and the narrator eventually becomes so exasperated with your seemingly pointless behavior that he eventually concludes that you, the player, must have died. He then calls out to anyone near your computer, asking for your body to be taken away and a new player to be found, one who (unlike you) understands basic first-person video game mechanics and the history of narrative tropes in games "so that the irony and insightful commentary of this game is not lost on them."

It doesn't take long to arrive at any one of The Stanley Parable's many endings, but it's exciting to play again and again, because the choices you make can take you down such wildly different paths, and because the narrator's commentary is so smartly written and its delivery so hilarious that finding ways to trigger new bits of it is as rewarding as discovering a secret area containing precious treasures in a great adventure game. You're simultaneously questioning whether or not any of your choices really mean anything and enjoying the inventive ways in which The Stanley Parable rewards you for the choices you make. And often, just when you think your understanding of The Stanley Parable is nearing completion, it throws you for a loop; the starting area might suddenly be different for no apparent reason, or doing the same thing you've done before might result in a different (and delightful) response from the narrator. The Stanley Parable feels alive in its responsiveness to your choices and its desire to subvert your expectations and keep you on your toes.

I think of The Stanley Parable as a sort of video game analogue for Charlie Kaufman and Spike Jonze's brilliant film Adaptation, which gently mocked the ways in which so many films manipulate audiences with formulaic plot twists and situations in which characters learn huge life lessons, while simultaneously moving me with its formulaic plot twists and situations in which characters learned huge life lessons. The Stanley Parable is both a richly stimulating commentary on the nature of choice in games (and in other systems, too, like our workplaces and our families) and a game that offers some of the most enjoyable, surprising, and rewarding choices I've ever been confronted with in a game. Going the wrong way has never felt so right.

View Comments (302)
Back To Top
9
Superb
About GameSpot Reviews 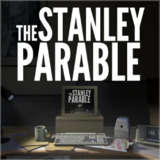 Carolyn likes to venture off the beaten path in life as well as in games, but unfortunately, the narrator in her head isn't nearly as witty as the one in The Stanley Parable. 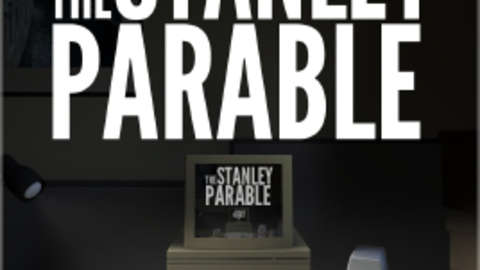 The Stanley Parable is a first person exploration game. and an updated version of the Half-Life 2 mode.