The Sims Bustin' Out Review

The Sims was originally an award-winning, best-selling PC game, though the game made the jump to consoles last year. The second game in the series for the PS2, Xbox, and GameCube, The Sims Bustin' Out, successfully expands on the previous game, not only by letting you make a more highly customized computerized person (or "sim"), but also by letting your sims "bust out" of their own homes and freely visit their neighbors. You can simply stop by your neighbor's house for a visit or move in and accomplish specific goals that let you unlock new items, new clothing sets, and other extras once you complete them. Bustin' Out is also more colorful and more varied, and it sounds a whole lot better than the previous Sims game for consoles.

Bustin' Out follows the same structure as that of the previous game--it features two main play modes, a goal-based "bust out" mode that lets you unlock new features as you complete specific objectives, and a free-form "free play" mode that lets you create a family of little computer people, then allow them to do their own thing. That means your characters will need to satisfy needs (known as "motives") such as food, sleep, and social interaction; they'll meet new friends with differing personalities; and they'll be able to develop their houses by building them up and buying new objects for them. The new game's bust out mode is at once more cohesive and more varied than that of the previous game, and it certainly gets tougher as you progress. This is because although you start off in your mom's house, as you did in the previous game, you can move out into other houses in the neighborhood and revisit any previous ones to clean up any unfinished objectives. Bust out mode's objectives are also usually related, like requiring you to advance two ranks in a single career path. The difficulty increases gradually and offers a good challenge later on.

A good part of the challenge comes from managing your sims' motives and careers, much like in the original PC game. Your sims' needs are constantly being depleted, and you must refill them by ordering your sims to perform an appropriate action, like fixing dinner when they're hungry. In the meantime, in order to advance in bust out mode, your sims must also pursue career paths by finding a job in the paper, then leaving home to go to work each day. Bustin' Out presents the workday in the same way the PC games did: That is, your sims are required to work at certain hours of the day, during which they simply disappear from the game for several hours, only to return home later, more tired and more hungry than they were before they left. However, in order to advance in a career path, sims must go to work in a "good mood," with all their needs mostly filled, so if you're dead-set on completing every last objective, you'll often find yourself with the less glamorous (and less interesting) task of babysitting your sims to make sure their every last little need is met.

Fortunately, you're not required to complete every last objective to move into a new house in bust out mode--you're free to visit any of the mode's 10 dwellings or pick up stakes and move among them until you complete enough objectives to complete the game, which should take you between 10 and 15 hours if you hurry. And free play is even more open-ended; it resembles the original version of The Sims in that you can create a family and move it into a house, then watch as the family members interact with each other and their neighbors. But this is about as interesting as it's ever been. If you like the idea of watching tiny computer-controlled people, who have minds of their own, interact with each other, forge friendships, and get into unexpected trouble, you'll likely enjoy this aspect of Bustin' Out. Even experienced fans of The Sims will appreciate Bustin' Out's new social interactions and new recorded speech.

Like the previous games, Bustin' Out features clever social interactions and the expressive "simlish" gibberish language that sims use to communicate with each other. Some of the new social interactions seem a bit juvenile, but they're a welcome change of pace, and a few, like the "sign language" social (in which your sim gives a rude gesture, then curses angrily--and the angry gibberish is punctuated with a high-pitched "censored" beep) are genuinely funny. The same can be said of Bustin' Out's sound in general, since it features a great deal of all-new simlish voice-over, as well as a fantastic, all-new soundtrack consisting of popular modern music types like hip-hop, pop, and rock music, and the PlayStation 2 version of the game supports Dolby Digital sound. While some of the game's menu and interface music tracks aren't all that interesting, your sims can turn on radios and stereos to hear hilariously dead-on parodies of popular music.

Bustin' Out has the same sort of colorful, simple look that The Sims for consoles did, though many of its objects and characters are slightly more complex and use more colors. The GameCube and PlayStation 2 versions of the game look about the same--each features simple-looking, pastel-colored furniture and fairly detailed character models for sims, though each version suffers from "jaggies"--aliased 3D graphics that have pointed, blocky edges. The Xbox version is clearly the best-looking one, since it doesn't suffer from jaggies, and while it has the same character and environment textures as the other versions, the textures are brighter and cleaner on the Xbox--it even supports 720p high-resolution displays. All three versions of the game feature enhanced options for customizing your sims' appearance, including loads of different hairstyles, shirts, pants, shoes, and accessories--and you're free to change your sims' appearance at any time within the game, as well as each time you reload a saved game.

Otherwise, the PS2 version of Bustin' Out supports online play in the "online weekend" mode, which lets you use your PS2 network adapter to visit with other players' sims to chat and swap items--an interesting way to get a bit more out of the game if you're done with the single-player modes. Also, the GameCube version of the game supports Game Boy Advance connectivity, though this feature doesn't seem like much of a big deal. It lets you transfer your sim to and from the GBA version of Bustin' Out, which essentially boils down to playing that version's mini-games for extra cash to import back into your GameCube game (you can also increase your sims' skills by using skill objects in the GBA game, which is a slightly faster process, but it's not a significant improvement). The three versions of the game are more or less identical in most other respects. All three versions feature the goal-based bust out mode, the free-form free play mode, and two-player cooperative multiplayer that lets you play through either of the other modes with a friend--a great improvement over the throwaway multiplayer modes in the previous game. All things considered, The Sims Bustin' Out makes good, solid improvements over its predecessor and stands on its own as a great version of The Sims for consoles. 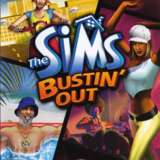