The gameplay might not be anything special, but The Simpsons Game delivers more than enough laughs to make it worth a look.

The Simpsons Game is a very strange animal. On the one hand, it's the sort of rote, generally uninteresting action platformer that dozens of high-profile licenses have cribbed for nefarious game-making purposes over the years. Yet, at the same time, this is a game that knows what it is and takes every opportunity imaginable to riff on that very fact. The game is as much about mocking the various conventions of the game business as a whole as it is about being Simpsons fan service, which makes for a very weird and often hilarious experience; so much so that you almost forget the gameplay itself is still pretty uninteresting. Almost.

The premise for The Simpsons Game is appropriately meta, given the circumstances. One day, Bart happens upon a manual for a game called The Simpsons Game, which has floated down from out of the sky. He learns that this game gives him and his family members special powers then promptly sets off to cause as much violence as possible. At the same time, a game called Grand Theft Scratchy has just been released in stores and Bart wants a copy, much to Marge's chagrin. She sets off on a crusade to stop video game violence. Then longtime comic foils Kodos and Kang show up to start blowing up the town, rehashing sequences from a variety of Treehouse of Horror episodes. Also, there's a weird and wacky world the Simpsons keep getting trapped in called "the game engine," sort of an alternate dimension where video games are created that's run by a bunch of haggard-looking spoofs of Mario, Sonic, koopa troopas, Ryu, and Madden football players. There's also a bunch of utterly random cameos from notable personalities, both from the Simpsons universe and the game industry itself. This is one bizarre and genuinely incoherent adventure, which is to say it's a lot like an extended episode of the show.

The jabs at video game culture are especially excellent. At times, the Simpsons family will find itself in worlds that are directly cribbed from notable game franchises and genres. The sections that knock off Grand Theft Auto and Japanese gaming in general are especially good. But you'll also come across direct parodies of Medal of Honor, EverQuest, and Shadow of the Colossus, to name a few. There are even some subtler gags in there as well, like the little mini-levels that pop up, directly mimicking such classics as Gauntlet and Joust. There is a really sharp awareness of the gaming audience's mentality in the writing here, and the game's various parodies are just about pitch-perfect.

It's not all game humor, of course. There's plenty of Simpsons-oriented humor as well, with a ton of crazy in-jokes scattered throughout the gameworld. When the game isn't lifting specific scenes or situations from various old episodes of the show and turning them into game levels, it's throwing out truly obscure lines that reference things from Simpsons past that even some of the more dedicated fans of the show might need a minute to recall. Anyone remember Linguo, the grammar robot? Or the episode where Lisa became "Clobber Girl"? If you said "yes" then congrats because the writers have geared this game decidedly toward you and your ilk.

All of this excellent humor does a good job of veiling the fact that the gameplay isn't very good. You'll be too busy giggling in most cases to notice that the camera is frequently getting in your way and that most of these mission objectives are just kind of boring. Most of the game revolves around simple action platforming where you hop around a lot of platforms and solve some light puzzles. You also beat up football players, pseudo-Ryus, miniature Krusty the Klowns, lumberjacks, Kodos/Kang lookalikes, killer dolphins, sumo Comic Book Guys, as well as gangsta Itchys and Scratchys, among others. Unfortunately, most of this stuff is just kind of boring. The combat has all the depth of the old Simpsons Arcade Game from the early '90s, and the finicky in-game camera has a tendency to make some of the platforming sections far more irritating than it should be.

Oddly enough, the game seems entirely self-aware of its own blatantly average gameplay. Along the way, you'll collect a number of "clichés," which are highlighted by Comic Book Guy himself. These include pits of lava you fall in, invisible barriers, a character's inability to swim, recycled enemies, escort missions, and the like. It's kind of funny to see these pop up because, yes, these are very clearly video game clichés. But the really weird thing is how utterly dedicated the game is to making you live through these clichés again. The game makes fun of escort missions, but then makes you do one anyway. You have to give the game credit for dedicating itself all the way to its gags, though the gameplay suffers a bit because of it.

The one kind of interesting thing The Simpsons Game does from a gameplay standpoint is that it constantly pairs you with another Simpson. You actually have the option to play cooperatively with a friend at any time, but when it's just you all by your lonesome, your cohort is a computer-controlled tagalong. Nearly all the game's puzzles involve the two characters working together, and for the most part, the artificial intelligence holds up its end of the bargain, rarely lagging behind by much. Plus, you can switch to the other character on the fly, which is helpful because you often have to use the special powers of both characters in somewhat rapid succession.

The powers themselves aren't terribly interesting, but at least they add a bit of variety to the proceedings. Bart can use a slingshot to hit enemies from a distance, as well as nail various targets. He can also get all Bartman and use a cape to float while jumping. Homer can turn into a morbidly obese ball that can be rolled around to attack foes using dash and slam attacks. Plus he can also turn into gummi Homer and launch gummi balls at enemies. Lisa can use her saxophone to turn enemies against one another, and at specific checkpoints in levels, she can use her Buddhist powers to bring a giant arm down to either attack foes or pick up pieces of the scenery then drop them into other spots to use as platforms or bridges. Marge is equipped with a megaphone and can use her powers of moral persuasion to get any passers-by to form a posse to do her bidding, which usually involves destroying things, building things, or beating up bad guys. As amusing as these sound, they're rarely used to especially interesting effect within the game itself. Most of the level objectives are pretty simple and it's plainly obvious in most cases which powers you need to use when. A few of the puzzle-solving sections are kind of neat, but that's about the extent of it.

It won't take you long to best The Simpsons Game. The main story mode will probably run you about six to seven hours, if you don't stop to smell the roses and collect every little random item the game throws at you. You could also spend a great deal of time just wandering around Springfield and taking in the various re-created sights or sounds, but doing so is an achingly slow process. This is because of the limited foot speed of the family members and your inability to drive anything. Still, there is lots to collect, and after you beat each level, you can go back to play it as a time challenge, which unlocks even more crazy stuff.

Given that this is a game based on a cartoon, it would have been exceedingly easy for the developers to quickly slap together some lousy-looking cel-shaded graphics and call it a day, but that isn't the case in The Simpsons Game. This game looks a whole lot like the show on which it's based. The characters and environments are drawn or animated in such a wonderful way that you really get the sense that you're traipsing through an episode of the show. You do lose a small sense of that when the game switches to an animated cutscene outside of the game engine, but at times, the line between the two really is blurred. The colorful and crisp graphics are made better by a steady frame rate that rarely hitches, save for in split-screen mode. Both the Xbox 360 and PlayStation 3 versions look nearly identical to one another.

Audio is equally impressive. The entire voice cast from the show is on hand, and they deliver their lines with the same sort of comedic enthusiasm as they do on the show. Even the guest stars are on point, and there are some hilarious guest stars to be sure. All the other areas of sound design are excellent too. Great sound effects pepper each level, and the music is always appropriate for the scene, from the weirdo jazz music that plays as you fight on an airship in the Japan level to the bombastic score that layers over the raid dungeon action of the EverQuest level. It's great stuff all around.

In the end, The Simpsons Game is one of those weird cases where a recommendation of it is based less on its merits as a game and more on its merits as an experience. The things that make this game are its sense of humor, sharp writing, and excellent presentation. The gameplay isn't awful by any means, but it's also completely unmemorable. It's something that's more to be put up with while you appreciate the many other things going on than enjoyed on its own merits. That might not sound like a ringing endorsement, but The Simpsons Game is absolutely worth playing. Games this spot-on in the humor category don't come along too often. Considering what a fantastic job it does spoofing the variety of clichés and crutches our favorite pastime relies upon, that's got to count for something. 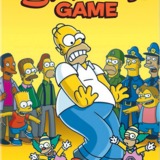