The Legend of Zelda: The Minish Cap Review

If you've been clamoring for a brand-new Zelda adventure that fits in your pocket, you can stop making a fuss now. Link's newest portable appearance, The Minish Cap, is here, and it executes the classic overhead Zelda formula with great precision and delightful whimsy. The basic gameplay is fundamentally identical to that of past games in the series, but the Zelda model is so entertaining, you can hardly call that a negative. The game is a little on the short side if you just plow through the main dungeon progression, but there's a vast array of optional side quests to undertake, and Nintendo and Capcom have also done a great job of coming up with new items and abilities for Link that fit right in with the standard Zelda structure.

Capcom, you ask? Relax--the company's Flagship studio developed the Game Boy Color Zeldas, Oracle of Seasons and Oracle of Ages, and it handled the porting duties on 2002's GBA version of A Link to the Past. Flagship definitely has Zelda chops, and they're put to good use in this newest adventure. In The Minish Cap, Link is once again appointed the savior of Hyrule when a wicked sorcerer named Vaati turns Princess Zelda to stone and sets off looking for the legendary light power that will give him dominion over all the peoples of the land. Early on, Link will come into possession of the eponymous cap, a sentient piece of headgear that bossily instructs him on how to complete his quest. Link's quest to restore Zelda and stop Vaati will be aided by the minish, a race of tiny, powerful (and cute) beings whom only children can see. You'll find portals hidden throughout the game that will shrink Link down to minish size, which will help you solve puzzles, find secret items, and generally see the world from a new perspective.

To stop Vaati, you'll have to gather the four sacred elements--earth, water, fire, and wind--and infuse an ancient broken blade with their essences. The quest for these four elements provides the impetus to seek out and plumb the depths of four ancient temples, each of which is a massive, complicated dungeon in the classic Zelda style. Multiple floors, a unique item in each one, a boss at the end--it's pretty standard stuff. There are a couple of nonelemental dungeons to pad the lineup, and all six are chock-full of devilish puzzles and fearsome enemies (many of which return from previous Zeldas). None of the dungeons are too hard--if you've played Zelda games before, you'll generally know how to approach the puzzles, even if you have to think about them for a while--but each one gives you a nice sense of satisfaction when you finish it.

The items you'll pick up to aid your adventure are a mix of Zelda mainstays and new, interestingly designed tools. In addition to the standard bombs, boomerang, bow and arrow, and so on, you'll find items like the gust jar, which can suck enemies in or blow puffs of air out; Pocci's cane, which shoots a bolt of energy that can flip enemies and items upside down; and Roc's cape, which lets you jump and even fly for short distances. As you'd expect, the level designers have found all sorts of ways to integrate the many items into the game's puzzles, and you'll find uses for each and every one of them right up to the final climactic battle.

Another interesting new mechanic that harks back to last year's Four Swords Adventures allows you to create identical copies of Link using glowing tiles on the floor. These copies will attack when you attack and maintain their formation based on which tiles you activated them on, and again this mechanic is used extensively in some of the game's puzzles to create some interesting brainteasers. Finally, you'll gain a bunch of extra sword-combat abilities if you seek out the appropriate trainers, who will teach you how to perform a downward thrust, a rolling stab, a spin attack, and so on. Some of these simply come in handy while fighting the game's tougher enemies, while others are actually used in a few of the puzzles. All the variety definitely spices things up.

If The Minish Cap consisted only of the six primary dungeons, it would be one short Zelda indeed. Thankfully, there's a ton of stuff to do in between the dungeons, some of it required and some of it optional. You'll occasionally go on smaller quests to progress the main storyline, such as returning a number of lost library books in order to speak to a minish elder who's taken up residence on a library shelf, or visiting a witch in the swamp so you can gain some much-needed new shoes. Aside from these story-related activities, you could easily spend a dozen hours (on top of the dozen you spend on the main quest) simply exploring the world, looking for extra heart containers and discovering other Zelda-style secrets. The Minish Cap's Hyrule Town is perhaps the most bustling burg yet in a Zelda game, with a ton of houses you can enter and plenty of people to talk to, buy things from, and fuse kinstones with.

Wait, kinstones? These are small colored medallions, the halves of which you'll uncover in treasure chests, under rocks, and in the possession of enemies all over the world. Most of the folks of Hyrule have a kinstone half of their own, and you can approach them to fuse the appropriate half, if you have it, with theirs to cause some effect somewhere in the world map. Some kinstone fusions will spawn treasure chests or open paths to new areas, where you can acquire rupees, heart containers, and so on, while others will have profound effects on other characters that may (in the rare instance) allow you to gain a useful new item. Kinstone fusion is almost entirely optional, but it certainly allows you to become stronger, find more items, and generally experience a lot more of the game than you would if you just rushed from one dungeon to the next. If anything, the game definitely encourages exploration.

The Minish Cap's presentation is top-notch, and it's heartwarming to see 2D games still being produced with this degree of care and attention to detail. Rather than reusing graphical elements from A Link to the Past, Flagship has created this game's graphics from the ground up and made them consistent with the whimsical, cartoonlike aesthetic of The Wind Waker, which is embodied especially in Link himself. The artists had a field day with the minuscule Link idea--the areas you enter while shrunk down are filled with bigger-than-life enemies, set pieces, and background elements, creating memorable moments in which you climb atop a desk and tiptoe past a giant slumbering with his head on the table, or walk through the rafters of a house, seeing the secret places the minish have made their homes in the world of the big people. Visually, this is easily identifiable as a Zelda game, but it's great that the artists have exploited the tiny-Link-in-a-big-world conceit to its fullest.

If you're a fan of traditional Zelda games, you'll find the game's audio just as uplifting as its visuals, with a great mixture of classic music that draws from Zelda games all the way back to the NES original (though many of these have slightly new arrangements) and new songs that fit in perfectly with the Zelda milieu. The sound effects are nicely implemented too, from Link's powerful yell when he swings his sword to the vocal effects of other characters and so on. You wouldn't expect anything less than greatness from a Zelda game's presentation, and it's nice to see that The Minish Cap delivers.

With Zelda games on the big consoles having long ago transitioned to 3D, and with Nintendo's new focus on its 3D-capable DS in the handheld market, it's not too far-fetched to imagine that The Minish Cap will be the last totally original 2D Zelda game. The game easily lives up to its predecessors, with enough questing and variety to keep you entertained for the duration of its storyline and beyond. Whether or not this game represents the end of an era for this hallowed franchise, it's a superb game in its own right that any fan of Zelda, and indeed any Game Boy Advance-owning fan of adventure games, shouldn't be without. 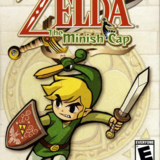