The Legend of Zelda: Ocarina of Time 3D Review

Gorgeous new visuals help make The Legend of Zelda: Ocarina of Time 3D the definitive version of an enduring classic.

Few video games in history have garnered as much critical praise and effusive adoration as The Legend of Zelda: Ocarina of Time. When it came out in 1998 for the Nintendo 64, Ocarina of Time set a new standard for three-dimensional action and introduced gameplay mechanics that are still copied today. Though it has since appeared on the GameCube and the Wii Virtual Console, the new version for the Nintendo 3DS marks the first time this classic has received a significant update. The completely overhauled visuals are the most striking improvement, and they infuse this 13-year-old game with a vibrant modern feel. The sharp motion controls and the video hint system are new additions that fit in well, but the real star is the original adventure. Though it shows its age, Link's quest is indeed a timeless one that is full of invigorating exploration, tricky puzzles, satisfying combat, memorable characters, and stirring music. The Legend of Zelda: Ocarina of Time 3D is a great way to experience this seminal adventure, and it's a shining example of how old can be made new again.

The world of Hyrule has been reinvented many times over in the Legend of Zelda series, but the visual makeover of Ocarina of Time's Hyrule is something different. The cozy village in Kokiri Forest sparkles with vivid foliage and golden shafts of sunlight, which is an early testament to the improved graphics. As with many adventures, your quest starts out small but quickly broadens in scope, sending you out into the expansive Hyrule Field where day turns to night as you appreciate the soft violets and deep purples of dusk. From here, you can travel to Castle Town, where first-time visitors will encounter a bustling plaza and sleepy alleyways. Returning visitors with good memories will be impressed by the improvements made to the buildings that make each shop burst with life. When you step inside one, you see that building interiors now feature more furniture, wallpaper, picture frames, and assorted knickknacks, making them some of the most dramatically enriched areas.

These aesthetic improvements haven't been made just for the sake of putting more stuff in there; in fact, the relative emptiness of many areas is one of the ways Ocarina of Time 3D shows its 64-bit roots. Villages, fields, and dungeons have a somewhat sparse feel when compared to the rich environments of many modern games. Despite this austerity, you still feel like you are exploring a fertile world. Keeping an eye out for anomalous areas can lead to a crucial discovery or a pleasant reward, and you regularly encounter things that you can't make heads or tails of until later in your adventure. Though the main quest is fairly linear, there is an abundance of mysteries to solve, (one-sided) conversations to have, and places to explore. When a villager tells you of rumors of a far-off land, and you later get to travel there to see it for yourself, it creates the sense that things are connected. When you hear a legend about an object that lets its owner see the truth, you've got some hunting to do.

The pursuit of objects is key to your quest in ridding the land of a great evil. In addition to uniting powerful artifacts, you acquire an array of weapons, clothing, tools, and items that can help you along the way. You get many of these as a necessary part of your journey, yet some are found only by going off the beaten path (by, say, helping a lady with her escaped chickens). It's a pleasure to build and upgrade your arsenal, even if you already know where to get the biggest wallet in the land. Some items, like the slingshot and bow, even benefit from the addition of motion controls. Whipping out one of these weapons snaps the camera into a first-person view. All you have to do is angle your 3DS to set up your aim and fire. These controls are not only quicker than the circle pad (you can turn motion controls off in the options menu), but they are also a lot more fun. Plugging a target from across the room with an arrow is more satisfying when you physically aim the 3DS, and looking around your environment (a crucial skill in Ocarina of Time 3D) is much quicker and easier. The only caveat is that this kind of aiming can cause the 3D effect to go out of whack, but this is easily solved by moving your head in sync with your arms or just flicking the 3D slider to off.

Weapons can also be fired at specific targets using the vaunted target-lock mechanic that Ocarina of Time introduced years ago. This system, now widely used in many games, is an effective combat aid that allows you to focus your attacks on one particular enemy. It can be finicky at times and require you to reorient the camera to actually obtain a lock, but as long as you give yourself some distance from your enemy before fiddling with your view, you should emerge victorious. Though there are some tough foes, combat in Ocarina of Time 3D usually presents a fair challenge. Most of your enemies can be vanquished with your trusty sword and judicious use of timing, dodging, and blocking, with enemies emitting a satisfying squish or death wail when you defeat them. Some kills are even more satisfying here than they were in other versions of Ocarina of Time because the revamped textures make your enemies look extra threatening. And if you fancy another run at any of the big bosses you conquer in your quest, a visit to your childhood home in Kokiri Forest lets you tackle these battles again in your dreams (a new feature for the 3DS version).

Puzzles are more likely to slow your progress than combat, and they make up a significant amount of the time you spend in the game's many dungeons and temples. At the time of the original release, adventuring in a three-dimensional world was still a novel phenomenon, and as such, many of the puzzles presented spatial challenges that involved moving objects around or observing 360-degree views of your surroundings. The intervening years have taken the shine off of some of these puzzles, and even first timers will find them simplistic. Yet the majority of the original level design still holds up well, and there is still satisfaction aplenty to be found in navigating temples (even if you've been there before). Some parts that were stumpers then are still tricky now, but players of Ocarina of Time 3D have an advantage that their predecessors did not. In the gameworld, there are now locations where you can receive visions of the challenges you face. These are video hints that show a series of brief scenes and illuminate the solutions to many of the game's puzzles. They reveal just enough to set you straight without spoiling the result, though if you're still stumped, you can always suspend the software, access the Web browser from the Home menu, and look up an online walkthrough.

With a long main quest and a bevy of other goals to pursue, you can easily spend more than 20 hours on your Ocarina of Time 3D play-through. Your entire journey is woven together by the excellent musical score that is as crucial in creating a sense of place as the environmental design. The brisk tune of Castle Town contrasts sweetly with the sleepy pastoral sounds of Lon Lon Ranch. Traveling from the jovial plunking beat of Goron City to the looming ambient tones of Dodongo's Cavern lets you know things are getting serious, while your travels to the western reaches of the map bring exotic strains unfamiliar to your Hyrulian ear. You meet many characters in your travels--the most memorable of whom have their own musical themes--and this connection deepens your emotional investment in the tale. And, of course, there's the titular ocarina. You wield this instrument in times of joy and times of trial; you play it to conjure helpful items and to whisk yourself across a continent. Music suffuses every aspect of this game, taking an epic adventure and making it soar.

When you've seen your journey to completion, you unlock the Master Quest, a tougher version of the same game you just beat. All of the environments are mirrored, which gives things a refreshingly unfamiliar feel. The dungeons and temples are also stocked with more enemies and restructured puzzles to test your mettle. It's a shame the Master Quest isn't unlocked from the beginning to give veteran players an advanced point of entry, but Ocarina of Time 3D should tempt both young Kokiri and wizened Heroes of Time. Though its roots show through from time to time, the improved visuals remove any barrier of entry that age may have posed. The new elements enhance the core adventure to create the definitive version of this classic game, making Ocarina of Time 3D the best way to embark on (or relive) this landmark adventure.

View Comments (24)
Back To Top
8.5
Great
About GameSpot Reviews

The Legend of Zelda: Ocarina of Time
Follow
$18.00 on Walmart
Buy 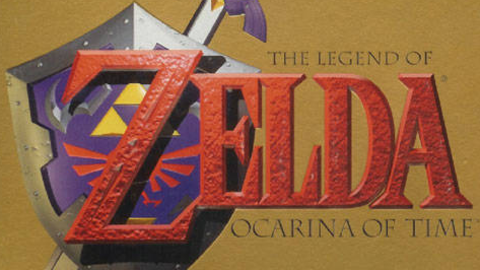 The Legend of Zelda: Ocarina of Time

Ocarina of Time definitely follows in the footsteps of the previous games, and the result is a game that can't be called anything other than flawless.

9.7
Sign In to rate The Legend of Zelda: Ocarina of Time