The Last Blade 2: Heart of the Samurai Review

All things considered, The Last Blade 2 for the Dreamcast is a faithful port of a good game.

The Last Blade 2 for the Dreamcast is a port of the 2D fighting-game sequel to The Last Blade, which is also known as Gekka No Kenshi. Both games originally debuted on SNK's arcade platform--the NeoGeo--more than three years ago. The Last Blade 2 features colorful anime-style characters that fight each other with swords, clubs, and even fishing poles. With The Last Blade 2, publisher Agetec has made another feature-complete port of a NeoGeo fighting game to the Dreamcast, though aside from a few extra options, it's apparently nothing more than a straight port of the NeoGeo home cartridge version.

Even if you take only a glance at The Last Blade 2, you'll see that it's one of developer SNK's most highly evolved fighting games in terms of graphics, animation, and voice acting. Each of the game's characters is large, colorful, and animated well, despite the game's low-resolution graphics. That's because SNK's experienced artists used every trick in the book to make The Last Blade 2's characters move with fluid and expressive animation, and Agetec's Dreamcast port reproduces it all. And as you may have come to expect from SNK's fighting games, each of The Last Blade 2's characters (except the stoic Shigen) is articulate, even chatty; and each has many lines of recorded speech (or grunts).

However, if you take a second look at The Last Blade 2, you'll find that it has all the trappings of a bad anime movie. The Last Blade 2 is a solid 2D fighting game, but that might be difficult to see if you can't get past the game's self-involved characters and pompous music. SNK made some attempt to write a story for the Last Blade games, which is apparently why several of the game's characters are scrawny, world-weary teenagers who wonder why they must fight...even though they're in a fighting game. And if you're put off by The Last Blade 2's foppish characters, you probably won't enjoy the game's dreary, pretentious music either.

But if you can get past the way much of the game looks and sounds, you'll find that The Last Blade 2 is actually an interesting game with a surprising amount of depth. Like most recent fighting games, it features multiple options and play modes. For starters, when you choose the character you're going to play as, you also choose from three fighting modes: power, speed, and EX. If you choose power mode, your character deals additional damage and can perform the most powerful superattacks. Speed mode lets your character perform quick and damaging chain-combination attacks, and EX mode lets your character use practically all of the other two modes' options and advantages, but your character takes additional damage when attacked. Characters in speed or EX mode can also use a custom-combination attack similar to the one in Capcom's Street Fighter Alpha 2. Most characters in the game have specific tricks or strategies that they can use only with a certain play mode, and you'll find that some modes are better for certain characters--but on the whole, the game is quite balanced. The Last Blade 2 makes liberal use of SNK's signature quarter-circle-to-half-circle and double-half-circle controller motions. If you happen to be a fighting-game veteran who's played many of SNK's games, you shouldn't have too much trouble adjusting, but if you're not, you may find that the stiff Dreamcast control pad isn't well suited for these maneuvers.

The Last Blade 2 offers different play modes in addition to its standard single-player story mode and two-player versus mode. There's also a training mode, plus a time-attack mode whose pacing is deliberate enough to almost compensate for the lack of a true survival mode. In addition, the Dreamcast port features a "mask mode" option, which hides everything onscreen except for the two combatants and the background (in other words, no life bars, timer, or anything else is displayed)--an option that was included in the original NeoGeo version. What's more, the US version of The Last Blade 2 shares another feature with the original US NeoGeo home cartridge version--white blood instead of red, which is clear evidence that the Dreamcast version is nothing more than a straight port. In fact, the Dreamcast version has only a few new features: It has Musashi (one of the original unremarkable boss characters, who wasn't featured in the NeoGeo version of The Last Blade 2), an art gallery, and a demo reel (which plays back the game's cutscenes).

All things considered, The Last Blade 2 for the Dreamcast is a faithful port of a good game. Agetec has already proven that it can make good NeoGeo ports (The King of Fighters '99, for example) and has succeeded again with The Last Blade 2, even if the company did simply port the game's code and features directly to the Dreamcast. Fortunately, the original game had enough features to keep it interesting, and thanks to its solid gameplay and stylized look, it holds up well enough, even three years after its debut on the NeoGeo. In fact, if you can ignore The Last Blade 2's rather pretentious appearance, you'll find that it's actually a 2D fighting game with quite a bit to offer. 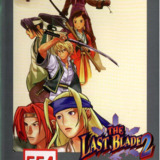 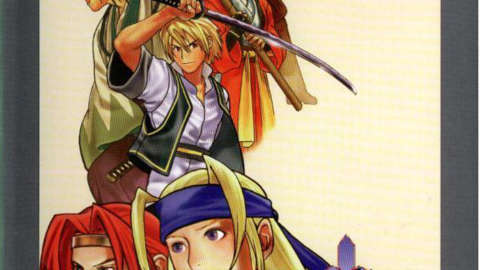 The Last Blade 2 is samurai fighter, complete with a comprehensive roster of characters, all with their own unique weapons and traits.