The Flame in the Flood Review

Take Me to the River

Survival games challenge you to gain control of treacherous worlds. You typically start with very little, and need to scavenge for supplies and resources in order to craft the tools needed to help you avoid death. Success usually means having enough power to establish yourself in a higher place on the food chain, or hunkering down and building a fortified space strong enough to keep the rest of the food chain out. The Flame in the Flood doesn’t allow you to achieve either of those goals and is a consistently gripping experience as a result.

Set in a rural post-societal America, The Flame in the Flood is a procedurally-generated survival game that focuses on constant movement and improvisation. The entirety of the game’s world consists of a large, overflowing river that has engulfed the countryside, destroyed man-made infrastructure, and isolated parts of the geography, turning them into islands.

The Flame in the Flood’s audiovisual presentation is integral to establishing its strong sense of place. The art direction invokes the aesthetic of a gothic storybook. The atmospheric sound design is ever-present. The rush of the flowing river is refreshing, and the heaviness of the thunderstorms is frightening. The musical score is an excellent array of Americana, ranging from mournful blues harmonica, cheerful acoustic guitar fingerpicking, wistful mandolins, and rough alt-country vocals. Together, they give The Flame in the Flood an aura of both despair and quiet beauty.

Your protagonists are a seemingly immortal dog and a survivor whose main concerns are keeping her hunger, thirst, body temperature, exhaustion, and any major injuries under control. Because the survivor can die from neglecting any of these concerns, players must keep them at bay by either scavenging or by crafting a variety of items using resources obtained from the land. But because of the game’s narrative conceit, you’re only able to scavenge on small islands with severely limited offerings. Finding the right components to create items you need often means exploring multiple islands as you traverse the river on your makeshift raft.

There are two major constraints that make this task both interesting and difficult. The protagonist can initially carry only a dozen items in her backpack, and you’ll only be able to dock at one or two islands in a cluster of many before the current pulls you further downriver. This design is frustrating at first--the impulse to grab every item and explore every area will cause you to waste far too much time and energy rearranging your backpack and paddling against the current. But once you embrace the idea of “going with the flow” so to speak, The Flame in the Flood becomes an engaging exercise of short-term prioritization and impulsive decision-making.

Though it will take a number of failures to understand the ecosystem, learning which items are universally useful and avoiding long-term hoarding are the key to staying alive. For example, keeping uncommon fire-starting materials in order to have a method of staying warm, dry, and being able to build a safe place to sleep is more vital than hoarding food--food eventually spoils, and edible flora is common enough in certain ecosystems to snack on as you come across it. Working out your priorities and having the courage to leave valuable things behind is a stimulating challenge. The Flame in the Flood keeps you on your back foot at all times. This feels like true survival.

Unfortunately, the user interface can prove to be a source of frustration. Essential tasks, like sorting your inventory and getting a broad idea of your current crafting options feel unnecessarily taxing because of the number of steps required. All pertinent information is kept within multiple subcategories accessed from a single screen. Inventory management and crafting existing in separate subcategories, and the recipes for different kinds of craftable items are separated into subcategories under that. Finding out what components are missing for a particular tool can be tedious because of the need to flip between menus and scroll through multiple entries to reach the information. Even after hours of play, I was still wrestling with the menu system, especially when using a controller. In fact, I began switching to mouse and keyboard exclusively for menus to make navigation a little easier.

But switching to mouse and keyboard is not something I want to do because movement, especially piloting your raft, is far more precise and satisfying with a controller. Travelling to new locations via raft requires deft avoidance of rock formations, remnants of human infrastructure and floating debris. Lightly flowing waters regularly turn into violent rapids, which are as treacherous as they are fun to navigate--impacts are devastating on both your raft’s integrity and your own vitals. Using the last of your stamina bar to push your raft just shy of a large, jagged outcrop is consistently thrilling, and when things quiet down, gently steering your raft through the remains of drowned towns at sunset while a haunting lap-steel melody plays is a sublime experience.

The Flame in the Flood encourages you to put long-term goals aside and live in the moment, to make choices and overcome short-term problems with risky but satisfying spontaneity. Despite the awkward menu system, it’s an absorbing game that lets you experience a journey in the present, and fully appreciate the sights, sounds, and joys of floating down the river in its alluring world.

Update: The Flame In The Flood’s arrival on Nintendo Switch as a “Complete Edition” comes with the mechanical refinements and feature upgrades that have been added since the game’s initial release. These include quality-of-life tweaks to crafting, an insightful developer’s commentary, and more importantly, an alternate dog companion to choose from. While the visual fidelity noticeably lower on the Switch and there are some minor hiccups in performance that aren’t present on other platforms, The Flame In The Flood still remains a unique and absorbing survival game. We have updated the score to reflect our experience with the Switch version. - Edmond Tran, Fri. October 13, 2017, 9:00 AM AEST 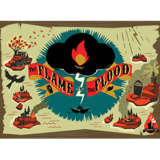 Edmond Tran spent over 15 hours rollin’ on the river, and roughly the same amount of time listening to the Flame in the Flood soundtrack together with ambient water sounds. The Molasses Flood provided GameSpot with a PC copy of the game for this review.