If you spent even a portion of your youth in the early 1990s, chances are that you have at least a vague, working knowledge of the Teenage Mutant Ninja Turtles. Starting out as an underground comic book in the '80s, Teenage Mutant Ninja Turtles achieved massive success when it was translated into a Saturday morning cartoon in 1987. From there, movies, action figures, and the inevitable video game spin-offs followed. Unsurprisingly, the games based on the TMNT franchise were largely very popular; what was surprising, however, was that they weren't successful simply because of their brand name but because many of the games were actually legitimately well made. Though the TMNT franchise has been taking a bit of a breather over the last few years, a new TV series has recently debuted, and not far behind it is Teenage Mutant Ninja Turtles, the latest video game featuring the heroes in a half shell. Developed by Konami, Teenage Mutant Ninja Turtles is a pure beat-'em-up that aims to rekindle favorable nostalgia for the TMNT games of days past, while at the same time the games looks to update the look and feel of the franchise for fans of the new series. Unfortunately, TMNT doesn't wear its nostalgic aspects particularly well, and the remaining components simply don't make for a very entertaining experience.

Teenage Mutant Ninja Turtles tells the story of four unassuming turtles who, one day, while wandering through the sewers of New York, are mutated into humanlike form by a mysterious radioactive ooze. With the help of a rat named Splinter (who was also transformed by the ooze), the turtles take the next logical step by learning martial arts and becoming superheroes. The game's plot revolves around a mystical sword that is being sought by the evil Shredder and his army of ninja thugs, known as the Foot Clan, so that they may perform unspeakable acts of evil with it. Along the way, you'll encounter many faces from the show, including the Turtles' best pal, April, and Casey Jones, the hockey-mask-sporting vigilante hero.

The game's story is told in an episodic fashion, with each stage containing its own segment of the overall story--although certain stages don't quite seem to fit into the overall plotline. Every stage has around five or six areas that you must clear to pass on to the next stage. Certain areas are preceded or succeeded by either a story sequence using the in-engine characters or an actual full-blown cutscene using the animation style and voice talent from the TV show. The cutscenes are actually quite well done, but the in-engine stuff only has the characters standing around occasionally shaking their fists or marginally changing their facial expressions to signify being mad or something similar. The show's voice talent is used in these scenes as well, but, overall, they're still decidedly lackluster when compared to the real cutscenes.

TMNT's gameplay is about as simple as you can get for a modern-day action game. Though you can play as any of the four turtles, they all handle roughly the same and there's no meaningful difference between them. The four main controller buttons let you perform a basic attack, a spin attack, a jump, and a throw (which, in this case, is "the throw" of a ninja star). You also have the ability to execute an uppercut attack, where you can juggle opponents in the air, and there's a dash function that lets you speed past groups of attackers. You can earn new attacks and stats for your chosen turtle by taking part in dojo missions. Dojo missions are training levels that appear from time to time, where you have to perform various tasks assigned by Master Splinter. These tasks range from the reasonably easy (breaking a number of boxes within a three-minute time span) to the seemingly impossible (defeating 30 opponents without being hit). If you successfully defeat the dojo level to Splinter's liking, you'll earn a new attack (like a jump attack) or an increased attribute (like stronger defense or offense). Despite these upgrades, however, you'll primarily just be running around, slashing through each area as fast as you can. Unfortunately, there isn't a whole lot of skill required for this.

Once you've gotten a feel for your range of attacks--which really shouldn't take very long at all--you should be able to breeze through TMNT pretty quickly. Enemies come in reasonably strong numbers, but, considering that none of them are particularly intelligent, their numbers are really their only advantage. Bad guys generally spawn a good distance away from you, and, unless you get right up into their personal space, they'll often just stay right where they are. Of course, you'll have to beat every enemy to progress to the next section of the level. So, periodically, you'll have to trot back to wherever the one stray bad guy, whom you didn't trigger, is standing. Then you must beat him down. Additionally, sometimes the game won't spawn the next cadre of thugs until you hit a very specific point in the level, requiring you to kind of aimlessly wander around until they appear. Later-level enemies have a slightly higher range of attack, but most of the thugs you'll face off against simply run at you and aimlessly swipe at you with a pipe, stick, or what have you. The boss fights are significantly better than the rest of the in-game action and do require a bit of skill and planning, but, considering you only encounter one in about every three areas, that still leaves too much flat, flavorless action.

The one nice thing about TMNT, however, is that it does feature a multiplayer component. You and a friend can pair up against Shredder's forces in the game's story mode, similar to how you could in past TMNT games. Playing the game in two-player is definitely more entertaining than playing alone, but there are some quirks. Periodically, the game's camera can get hung up in certain spots if the two controlled Turtles get too far away from one another, and this can cause some visual problems. Additionally, gameplay becomes much, much easier with a duo, due to the fact that the game doesn't make up for the increased handicap by throwing more enemies at you or anything. Finally, and most depressing of all, the game absolutely screams for four-player capability, considering how much the game is geared as a throwback to previous Turtle titles and the fact that there are four turtle characters.

Aside from the story mode, there are also a couple of other gameplay modes in TMNT. Versus mode is as close as you'll get in this console generation to the 16-bit classic TMNT: Tournament Fighters. In versus mode, you can choose from any of the four Turtles (as well as a number of characters you can unlock in the story mode) and go one-on-one in a straight-up brawl. While this is a nice feature, the game's fighting mechanics don't lend themselves terribly well to a fighting game-styled match, and, generally, the fight is over pretty quickly. There's also an unlockable challenge mode, where your goal is to run through a selected level as fast as you can. Challenge is also a nice addition, but it's not terribly interesting after a few plays through.

TMNT's strongest features definitely lie in the graphics department. The game features a fully cel-shaded look--and a great one at that. The models for the Turtles, side characters, and even generic enemies are great, and they include a nice level of detail and vibrant colors. Everything in the game animates very smoothly, and, no matter how many character models are onscreen, the action almost never slows down, save for a few instances when massive explosions go off in the background. The only real down point to the game's visuals is the level environments, which are pretty lacking in any manner of detail and just don't look anywhere near as polished as the character models. There are some other minor quirks here and there, like how enemies will simply spawn out of thin air without anything done to cover this up and like how the effects used to accentuate hits with the big "SMASH!" and "POW!" icons can obscure certain parts of the action, but these little types of problems don't take away from the fact that the game looks pretty great overall.

Less impressive is the game's sound quality, which, despite the roster of voice actors from the TV show, falters in pretty much every other category. During the game, the Turtles will spout off a limited array of catchphrases as they pummel their foes; unfortunately, they also spout the aforementioned catchphrases ridiculously often, meaning you'll be hearing such phrases as "Talk to the feet!" and "Slice and dice!" at a practically constant rate. The game's scant selection of music is decent, though pretty unmemorable, and, as far as in-game effects go (like the catchphrases) there aren't a lot of them, and they repeat--and repeat often.

There are things about Teenage Mutant Ninja Turtles that can be praised. Its graphical style is quite pleasing to look at, and the game certainly deserves points for giving you a multiplayer option (even if it would have been better served in four-player instead of two-player). Unfortunately, the gameplay, though an earnest attempt to mirror its predecessors, is too hollow on its own merits and simply lacks the charm and fun of previous titles. That is not to say the game is a total loss, by any means; younger fans of the new TV series will likely not be swayed by the game's elementary fighting mechanics and should find the storyline entertaining. 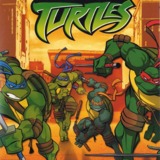 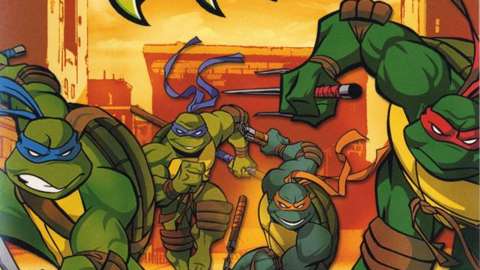