In Tastee: Lethal Tactics, your plan is more important than the action that follows. It's a game of bets and bluffs, and if you telegraph your next move, you'll likely lose. Tastee doesn't always communicate its ideas effectively, and there are frustrating barriers to hurdle, but there's a tense, layered, turn-based strategy game waiting on the other side.

It all revolves around simultaneous turn-based combat in two phases. In the planning stage, you direct the stance, movement, vision cones, and attacks of four individual mercenaries fighting your opponents. In the action phase, you watch your plan unfold--all while the enemy does the same.

This forces you to think on several levels as you extract briefcases of money, defend control points, and eliminate enemy soldiers from an overhead view. You not only have to plan out your own attacks--you also need to consider the route your opponent might have in mind. So while your sniper may have one doorway covered, and your grenadier is ready to move around the corner of that building to get in position, this could all fall apart in the action phase if your opponent anticipated it. The resulting clashes are whiteknuckled displays of who saw the bigger picture in the planning phase.

This structure isn't new--Tastee borrows from games such as Frozen Synapse and Laser Defense Squad, which use similar phase-based combat systems that emphasize careful planning over reactionary tactics. As was the case in those titles, you spend most of your time in the planning stage, your squad members frozen in place, trying to think two steps ahead of the opponent. Facing another human exacerbates the tension of the missions. Tastee's AI performs well, but matches become cutthroat poker games when you can relate to, and exploit, another player's perspective.

Considering the numerous mechanical layers at play, and the nuance they display on each level, there's a steep learning curve to Tastee's combat. In fact, its tutorial only teaches the bare fundamentals of movement, aiming, and attacking before thrusting you onto the battlefield, either in multiplayer or the single-player missions. Because of Tastee's unforgiving difficulty--characters can die from only one bullet--most of your learning is based on trial and error. I spent almost two hours before I completed a mission without any casualties.

The 30 single-player missions focus loosely on a band of 12 misfit mercenaries fighting against the drug cartels in a desert wasteland. The story is sparse and and repetitive, and serves mainly to introduce new characters, complete with unique abilities to use on subsequent missions: flashbangs, door breaches, ricochet grenades, and enhanced sniper rifles, to name a few. They're some of the game's best aspects, as they create stronger attachments to their respective owners.

The loss of each soldier isn't permanent, but reverberates throughout the rest of your mission --losing a mercenary means losing a useful superpower, as it were. Augustus' Scout ability, for instance, lets you spot nearby enemies through the fog of war. If you can deduce which direction a soldier is running, and where he'll emerge from behind cover, you can set a sniper's sights on that exact spot. These abilities seem simple at first, but reveal deeper uses as you learn them.

There are numerous mechanical layers at play at any one moment.

Tastee's stellar map design is the catalyst for all of this planning and subsequent action. Missions span a variety of sandswept urban locales, from construction yards to abandoned shanty towns. Concrete walls funnel soldiers through choke points, wooden boards create complex sightlines, and low barriers provide opportunities for cover. The environments present a fine attention to detail, both in how they force your squad into precarious scenarios and how they allow you to master your surroundings. There's a sadistic thrill to circling your opponent's squad, eliminating them one by one, and setting up ambushes to stop their attempts at escape.

Maps can become something of a conundrum, however. Tastee's bigger arenas play host to numerous smaller encounters and nuanced skirmishes, lending a sense of cohesion to the separate huts, garages, and gas stations. The problem is, these bigger maps add to the confusion that sometimes rears its head in Tastee.

During the action phase, it's usually useful to zoom out from the map to see your overall plan unfolding. But the bigger the map, the less I understand the tactics of Tastee's world. There are more opportunities for distant snipers and random grenadiers to kill you on a whim. Often, I have no idea where I went wrong--what mistake sent things south. These sprawling locales are well designed in how they encourage tense individual encounters, but when they keep you at a distance from the action, it's hard to see what's happening on a minute level. The grasp I usually have on the tactical situation dissipates, leaving me confused.

Tastee's user interface doesn't do it any favors either. Instead of crowding the edges of the screen, characters' abilities and commands manifest in an arc above their heads. While this streamlines the process of selecting a mercenary, giving them a chain of commands, and setting waypoints throughout the map, it leads to several more frustrations. For one, characters' selection boxes often overlap. In close-quarters battles, it's often tough to target the wrong character. Secondly, cancelling commands or waypoints is laborious, forcing you to parse through tiny buttons on a small list for sometimes minutes on end, in an effort to finalize your plan.

Despite these annoyances, it's hard to deny the thrill of Tastee's firefights: moving your mercenaries into position, covering almost every sightline, worrying about that one you can't cover, and wincing as a shotgunner misses his target by a few inches--this is Tastee at its best.

Tastee is also clever in the way it disguises its systems in order to teach you through experience. It's an intelligent, difficult game with a high barrier of entry, and without patience, you might not see how great it can be. But once you see the layers hidden beneath the surface, Tastee Lethal Tactics becomes an intricate game of cutthroat poker. It just takes a bit of frustration to buy in. 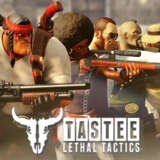 Mike Mahardy completed Tastee: Lethal Tactics single player missions, and lost a handful of missions to far better players in multiplayer. GameSpot was provided a copy of the game for review. 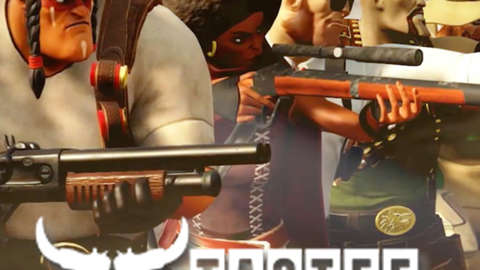 Strategy has a new name and it’s damn TASTEE. Recruit a team of volatile mercs and execute dramatic gunfights on a mission to take down the Cartel. Out think, outmaneuver, and eliminate enemies in a fresh take on simultaneous turn-based tactics. Precision planning meets epic action.