Tales of the Abyss Review

Tales of the Abyss is a familiar but entertaining role-playing game with a charming cast of characters that helps sustain the lengthy story.

The Tales series of role-playing games might not quite have the clout of juggernauts like Final Fantasy or Dragon Quest, but with more than a dozen releases in just over 10 years, Namco Bandai's franchise is certainly prolific. Although some of the Tales games have been underwhelming to say the least, the series has carved out its own niche in a world of copycat Japanese role-playing games by delivering consistently good stories, interesting characters, and accessible mechanics. The latest entry in the series, Tales of the Abyss, continues the trend. It isn't a particularly remarkable role-playing game, but it will keep you pleasantly entertained throughout its lengthy campaign.

Tales of the Abyss follows the story of an arrogant young amnesiac named Luke fon Fabre. Turns out that Luke was kidnapped seven years ago, and the shock of that event made him lose his memory. Since his return he has been confined to his family's estate, forbidden to leave until he reaches maturity. As a result, Luke is a spoiled, naïve brat with very limited social skills. He spends his days training in martial arts and talking to the servants around the mansion. That all dramatically changes one day when a woman named Tear shows up and attempts to assassinate Luke's master. She fails, but in the commotion somehow Tear and Luke both get magically transported to another part of the world, and they must figure out how to return home (and of course prevent a war and save the world along the way).

Fortunately Luke doesn't have to go it alone. There's a small cast of helpful supporting characters that you'll meet along the way, including a snooty princess, an accomplished swordsman who's terrified of women, a furry little arsonist creature who has been exiled from his tribe, and more. The unique relationships between the characters are developed over time to give your party a special dynamic that you'll appreciate throughout the game. Instead of being a party of one cardboard cutout after another, the characters in Tales of the Abyss actually bring a lot to the story and convey plenty of personality through the frequent and lengthy cutscenes. The dialogue is well written and surprisingly natural and entertaining for a role-playing game. Most of it is fully voiced, and the English voice acting is well delivered for the most part, and even the worst of it isn't so bad as to be distracting or annoying.

The gameplay doesn't veer too far from the well-worn path of previous role-playing games. You move from town to town and dungeon to dungeon completing quests and vanquishing enemies to move the story along. When you're exploring a dungeon or traversing the overworld, you'll encounter monsters, which initiates a battle. You can take up to four characters into battle, and three of those characters will be controlled by artificial intelligence. The artificial intelligence is customizable, so you can set a variety of parameters to influence each character's behavior. It works well, and the characters usually do a good job following orders. The battlefields are large and 3D, so you're free to run around as much as you want, which comes in handy when you need to evade enemy attacks.

The mechanics of battle seem simple at first, and indeed it's quite easy to hack and slash your way through most of the early battles in the game. However, as the game progresses, slight but significant layers of depth are added to the combat. In battle you have several different attacks that can be strung together to form combos. There's a standard attack that can be modified by pressing the left analog stick in a specific direction. Each character can also use "artes," which are special moves that inflict more damage and often have elemental properties. Most of the time in battle you'll be stringing together combinations of standard attacks and artes, which leads to a lot of mindless button mashing.

As the game progresses the battles get much more difficult, and they require a bit more than simply pressing the attack button a few dozen times. To deal with the increasingly difficult enemies, you need an understanding of some of the more nuanced systems, some of which aren't even unlocked until you're well into the game. The field of fonons system is one way that you can significantly impact the result of battle. As characters use elemental abilities, colored circles appear on the ground. If you are in one of these circles, it will affect your own artes, sometimes altering an attack completely. The problem is that these fonon circles stay around for a limited time and cover a limited area, so timing and positioning are key, and those are two things that can be tricky to get down in the midst of a heated battle.

Of course, the best way to succeed in battle is to be well prepared, and this is where the character customization comes into play. You can equip each character with a core, which gives specific stat bonuses as the character levels up. For example, one core might boost your physical attack stat, so if you equip that core to your main fighter, he or she will become a much stronger fighter over time. You can also upgrade your artes by collecting gems, which can be allocated to various slots that enhance specific traits of your artes. If you have a particular skill that you favor, you can allocate gems to make that skill more powerful, or less costly in terms of tech points, which are required to perform artes. These extra little tweaks to the combat and character development add a lot of depth to Tales of the Abyss, but at the same time they aren't overwhelmingly complex.

Even with these unique tweaks to a familiar system, the battles in Tales of the Abyss move quickly. In fact, some of the early battles in the game take less time to complete than they do to load. Some of the boss battles do take quite a long time, simply because the bosses tend to absorb a ton of damage. But even during the drawn-out boss battles you'll need to think and react quickly, because the combat in this game doesn't let up until one side is completely wiped out.

When you aren't battling or working your way through dungeons, you can partake in a variety of other activities. There are numerous side quests to complete for special rewards, and there's a fighting arena to test your skill, and if that's all a bit too much work, you can always just kick back and cook yourself up a nice, healthy meal. As if that weren't enough to keep you occupied, you can also play Tales of the Abyss with up to four players cooperatively, with each player controlling one character.

Tales of the Abyss has some charming character designs and nice-looking environments, but it's not without some rough spots. The characters aren't quite superdeformed, but they definitely aren't realistic, either. They are colorful and expressive, but also blocky and undetailed. The world itself is generic, with the usual creepy forests, desert wastelands, cavernous dungeons, and so on. When you're on the overworld map, the frame rate tends to drop, which is annoying if you're trying to get anywhere quickly. The game sounds a bit better than it looks, with voice work and nicely orchestrated music to accompany the rest of the game.

Even with the glut of similar role-playing games on the PlayStation 2, Tales of the Abyss is an entertaining experience throughout. The story isn't especially engaging, but the characters are, and the combat is simple but satisfying. The fact that the game is available at less-than-full retail price only sweetens the deal. 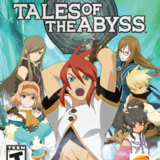