If you have a GameCube and like RPGs, you definitely need to check out Tales of Symphonia.

Namco's Tales series of role-playing games have always carried something of a cult status outside of their native Japan. In a console genre that many people define in Final Fantasy parameters, the Tales games have been quiet understudies that haven't garnered much attention. Enter Tales of Symphonia, the latest game in the series and the first to appear on the RPG-starved GameCube. Happily, the game is more than just a pretty face--it is a welcome entry into a console's needy genre; it's an entertaining game with a pretty standard story line, but it also has terrific gameplay and a lot of appeal.

The game is set in the world of Sylvarant, a land that is on the wane due to a steady loss of mana, the energy source that is needed both for magic and to support life itself. As the crops begin to wither and hardship sets in, the people turn their hopes to the Chosen One, a servant of the Goddess Martel, who can reverse the ills of the world by completing a journey of world regeneration. You play as Lloyd Irving, a teenage boy, who sets out with Colette Brunel (the young girl who happens to be the Chosen) and a group of compatriots to restore the world's mana and to set things right. The story is standard fare and has a few obvious twists, though it's shored up a good deal by the wide range of characters you come in contact with. The journey may be long, but it's well-populated with characters and a few subplots, which you can keep track of in a synopsis journal accessible from your main menu.

Your journey through Sylvarant is also made lighter by the fact that you're generally not subjected to random enemy encounters. Both in dungeons and on the world map, you'll see representations of monsters hanging about. In dungeons, there'll be various types of creatures roaming specific areas, and it's almost always possible for you to navigate right around them, even in close quarters. The world map handles things a bit differently; monsters show up as either blobs or wacky little bipedal critters, and you'll be able to see them when you get close enough. Some of them sit still, some of them wander randomly, and every so often you come across one that hops excitedly and dashes straight at you. They can start dashing when you're still not in range to see them, so you can still get caught unawares every so often, particularly on long treks. And even that's not necessarily such a bad thing, because once you get adept at dodging enemies, it's easy to go for long stretches without fighting; however, then you'll find yourself running into a brick wall in the form of a boss. You'll want lots of hit points and special techniques at your fingertips to handle those baddies, and to get there, you're going to have to spend some time leveling. However, that task is itself made less onerous by the versatility of the battle system itself, and the fact that you get to pretty much choose your own fights.

Tales games have always used what Namco calls the "linear motion battle system," a real-time, 2D battle engine that lets you move around the field and attack foes at will. Tales of Symphonia uses an expanded version of this system that's fast, fun, and easy to master. By default, you'll directly control your main character in battle (who is almost always Lloyd) and your teammates will act according to their artificial intelligence. The battlefields are 3D, so you will have enemies fanned out a bit, but your movement is still two dimensional--only forward and back--so you are aligned with the current monster you have targeted. If the enemies are clustered together close enough, you can hit several with one type of attack. The A button controls your standard melee swipes, while the B button triggers your special tech attacks. You can have numerous tech attacks mapped at any given time that correspond with pressing B alone or in conjunction with moving your analog stick in a certain direction. You can block incoming attacks by hitting the X button. Mastering blocking becomes very important, especially with bosses with huge attacks that would otherwise hit for devastating damage.

Battles evolve quickly into full-speed melees where you'll be balancing your tech points (used for special moves) with melee hits (each hit gains you a tech point back) as you rack up combination hits by striking in concert with your teammates and avoiding danger by blocking and moving out of range. Your team's number of successful strikes will eventually go into a meter; when that meter fills, you'll be able to execute unison attacks, which consist of an offensive special attack from each ally who has such an ability, with no tech point cost. You'll have to execute a number of button presses within a time limit to pull those off, but it's based on the same simple control scheme as normal specials. When you couple the above with the possibility for combined special attacks and special unison attacks, which are dependent on certain move combinations, it gives you a robust, ever-changing stream of possibilities in battle that can be great fun to perfect. You can also call on the forces of summon spirits, elemental beings you'll have to seek out and form a pact with.

Your allies will, for the most part, not need direct intervention from you. They have an impressive number of AI settings that can be adjusted both inside and outside of battle that can be tweaked as needed. You can set them to heal people when hit points get low, you can set them to give enemies a wide berth and attack with remote special attacks, you can tell them to all gang up on the same enemy that you're fighting, and you can have them use their tech attacks with abandon, and so on. Certain settings are best for certain situations, as well, so you won't be issuing a single setting and then leaving it for the rest of the game. Your allies comport themselves very well with such minimal direction--and you can even let your friends play along and control the other characters by hooking up their controllers.

You can even earn additional bonuses by triggering certain events during a fight. The bonuses come in the form of unique "titles" bestowed upon a character that will grant extra points to certain stats when gaining a level. A magic user who uses every form of elemental magic in a battle will get a title that boosts magic power; a character that pulls off a 30-hit combo will get a title that boosts strength. Depending on how well you perform during a fight, you'll either get points added to or taken away from your "grade." You can keep your grade high, or trade the points in for useful items along the way.

When you're not busy fighting (or avoiding fighting) in dungeons, you'll be wending your way through by means of solving a series of usually simple puzzles. The puzzles are built around the use of an item called the Sorcerer's Ring, a magical bit of jewelry that can change powers by charging up via a special item in the dungeon. Some of the powers are amusing--in one instance the ring will shrink your party to bite-size, and suddenly the sewer rats you come across become giants in battle. You'll rarely get stuck on a puzzle; the dungeons tend to be short, and the puzzles are easy to decipher.

When wandering the world otherwise, you'll find a variety of towns and cities to visit and plenty of people to chat with. And it's not just non-player characters you can shoot the breeze with; at certain points in the game, a title will appear at the bottom corner of your screen with an image of the Z button. If you press the Z button, you'll bring up a skit that involves the diverse members of your party talking to each other, usually about recent events that have occurred. These skits--which consist just of talking heads (character portraits) and are separate from cutscenes--are almost always optional, but they go a long way toward fleshing out the characters in your party as well as their personalities and relationships with each other. Unfortunately, the skits tend to scroll slowly, allowing for changing facial expressions at key points in the dialogue, so it makes them sometimes tedious to sit through. They're a good way to keep the game from being broken up by too much exposition, and if you wish, you can skip the skits and go on to the next world-threatening event--of which there are a lot, as the game easily lasts 40-plus hours.

Visually, the game's characters sport the cel-shaded effect that was all the rage not so long ago, and the cartoon look fits the anime-inspired art style well. Fresh-faced and brightly colored, everyone looks almost too cute in that way the Japanese have perfected, although the 'toon look isn't flawless. The game, at times, utilizes a blurring effect that attempts to create a sense of foreground and background positioning of characters within certain scenes, but it just ends up smearing the look and making you squint. Towns and cities have made the crossover from the classic Tales' hand-painted design to a new 3D setup very well; they still have a lot of detail and personality, and are very easy on the eyes. The world map portions of the game have much less eye candy, due to the fact that there's already so much going on with enemies popping in and out of view. The camera view, when running across the landscape, can also be a bit chancy; a lot of times you'll have to adjust it to try to get a clear idea of where you're going, and even then you'll sometimes run into a monster you felt you should have seen.

The voice acting in the game is very even and pretty consistent in quality; you'll rarely get over-acted or oddly inflected lines. Certain characters sound better than others, but none of them sound horrible, which is nice considering that there's quite a bit of voice in the cutscenes. The soundtrack holds true to the Tales' norm of combining wind instruments and bells in pleasing ways for main themes, and battle music does its job of getting you hyped up and then staying out of your way.

Tales of Symphonia was worth the wait. Fans of Japanese role-playing games will take to its style and the depth of its battle system, and those curious about the genre and who loathe the idea of turn-based battle and scads of random encounters will appreciate the quick fighting pace. While the story may rely a bit too much on cliché, the ride is still worthwhile. If you have a GameCube and like RPGs, you definitely need to check out Tales of Symphonia.

View Comments (1)
Back To Top
8.8
Great
About GameSpot Reviews 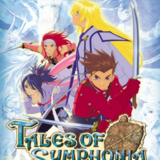