Tail of the Sun Review

There just isn't enough variety here to keep the attention of the upright-walking.

Tail of the Sun is one of the most tactical, small-scale empire-builder ever created - the scale here being individual hunters in small tribes. In this 3-D hunter/gatherer you play a prehistoric knuckle-dragger on a quest to, well, exist. Existing entails sleeping, eating berries - actually, they're obviously Japanese sugar cookies, please just don't even ask - hunt down creatures residing on the lower rungs of the food ladder, procreate, and ultimately croak on some godforsaken, windswept tundra. Along the way, you'll develop new skills and weapons for your tribe, which will prepare you to go after the bigger game; specifically, the mammoth, which not only provides scads of meat, but valuable tusks which are used to create your tribe's greatest cultural achievement: The Irritating Control Scheme.

No, seriously - the tribe's greatest achievement is The Tower (made of those coveted tusks) with which your tribe will reach toward societal growth, the Sun God, spiritual enlightenment, and all that crystals-and-healing crap. But that's a lofty goal for future generations, and if you don't get out there and take down some fresh meat for the tribe pronto, there ain't gonna be any future generations. So off you go, one warrior at a time, to roam the quiet Earth in search of game. The world is a 3-D environment with multiple terrains, bodies of water, and moving animals, as well as many different varieties of plants (and by 'plants' I mean 'sugar cookies') which, when eaten, have specific benefits for different skills and parts of the body; you will discover plants that increase intelligence, strengthen legs for fast running/hunting skills, or aid the, ahem, procreative faculty.

The graphics, in keeping with the game's subject, are minimalistic, reinforcing a primal atmosphere - yeah, right. The graphics are crude, with blocky warriors and creatures, some of which move around like they were stuffed animals tottering around from one leg to the next. Anyway, your warrior's days are numbered as he treks across the wild.

Snowstorms, sunrises, and the like reflect the passage of time and seasons. One very simple but nice trick comes when night falls, and the sky becomes a bright, child's kaleidoscope of stars and planets, crossing the sky in uniform arcs like points of light in a planetarium show. As you move about, it immediately becomes apparent that while the world is truly 3-D and unrestrained, your viewpoint is annoyingly bolted firmly to the south - thus, trekking south will have your own character facing you, and trekking west locks the viewpoint to the side of your cromag's progress. This whole setup gets irritating when you're trying to throw new-fangled weapons (such as rocks and spears) at prey because it's more difficult to line up a shot. Another point about hunting while the going's good: Getting your warriors tucked in each night is important, because the sandman comes to say nighty-night in this world with all the subtlety of Krakatau. It's not uncommon when chasing an animal to be running full-bore after some prize piece of game only to suddenly and stiffly face-plant yourself to sleep because you haven't been resting enough in your travels. Do this close to your prey and the animal will have no qualms about mauling you, the sleeping bozo, while you doze. Do this on the steep terrain of a mountain and you will slide down the slope, snoring and spewing Zs all the way to the bottom.

There is unquestionably some gameplay here, but it's hard not to feel a little shucked-and-jived by Tail of the Sun's prehistoric schtick, which seems like an excuse for its often lackluster presentation. The music is labeled as 'tribal,' which is fair enough, and the simple graphics, doubtless thought of by their creators as atmospheric, are indeed 'primitive,' but probably not in the intended sense. The best part of Tail of the Sun is freely (if awkwardly) exploring your widely-terrained world and slowly gathering the physical and mental wherewithal to take down a mammoth - an activity which I guarantee you will mess up, and mess up badly, on your first attempt. Perseverance and stubbornness will eventually lead to a tribe of up to 100 people and the eventual construction of the Tower to the sun, but there just isn't enough variety here to keep the attention of the upright-walking. 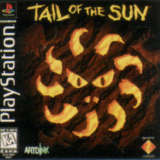