If you've got a crew of friends ready to pick a Nintendo character and throw down, then Super Smash Bros. is definitely worth a purchase.

It's an idea so simple, it makes you wonder why it took so long to happen: Take all your top-notch characters and toss them all into one game. In this case, the characters are Nintendo's, and the game is a new spin on your typical fighting game. The result is Super Smash Bros., a fighter that is easy enough for anyone to pick up, yet it has enough multiplayer appeal to stay interesting for a good long time.

The characters are, of course, what makes this game interesting. All the characters that have made Nintendo what it is today are represented, including Mario, Link, Samus Aran, Donkey Kong, and Pikachu. There are eight characters to choose from initially, and four more hidden characters to unlock. The game's backgrounds also reflect the various characters' natural envirornments: The Starfox stage is complete with buzzing Arwings, while Link's stage looks somewhat like a castle. The game's music is also pretty amazing, with tunes lifted directly from past games. So you'll hear the Legend of Zelda overworld theme, the world-famous Super Mario Bros. tune, and other littlepieces of incidental music, like the SMB star music and the Donkey Kong hammer tune. The look and sounds of the game really give it a "greatest hits" type of feel. The sound effects have been changed a bit from the Japanese version (the energy sword doesn't sound like a lightsaber anymore, and some of the speech has been changed), but not enough to really matter.

The game's object is pretty simple. Each stage hangs in the middle of nowhere, and you must knock all the other characters off the level to win. But it's not as easy to knock the fighters off as you might think: The characters can double jump, and several have attacks that can also be used to shoot upward., However, the more damage you inflict on fighters, the easier it is to send them flying. While you can rely on your standard arsenal of punches, kicks, and special moves to do damage, you can also pick up occasional items that randomly appear on the level. Items range from simple bats, swords, and guns to the more exotic Donkey Kong hammer and Pokeball, which spits out a random Pokemon whenever you use it.

Two-player battles are fun and all, but the game's real charm comes out in four-player mode. In any of the multiplayer games, you can either set a time limit or give players a certain number of lives to expend. Graphically, Smash Bros. does pretty well. Each character moves pretty nicely and looks about as good as you'd expect. Characters that have previously appeared on the N64 look about the same as they do in their own games. Samus Aran, who makes her first N64 appearance in this game, looks OK, although she is a little on the blocky side.

The game is extremely simple to learn and reasonably easy to master. The one-player game won't exactly last a long time, unless you count the time you have to spend unlocking all four of the hidden characters. So, if you've got a crew of friends ready to pick a Nintendo character and throw down, then Super Smash Bros. is definitely worth a purchase. 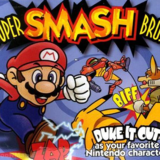