Putting your dead body to use.

Super Rude Bear Resurrection is one of the hardest games I've ever played--but only at times. Certain games, Resident Evil 4 being a famous example, use a dynamic difficulty system, invisibly adjusting to keep the action challenging but not frustrating. Super Rude Bear Resurrection does something similar, only in a much more obvious, tangible way.

It's a hardcore platformer in the mold of Super Meat Boy, but with a novel twist that gives meaning to the countless deaths you'll suffer throughout. Corpses persist after death and can be used to create a safer path through levels (where one false step will send you back to the last checkpoint). In essence, almost every death serves to make the game slightly easier--though you can also clear levels without ever dying. It's a delightful concept that further enhances a game that's already strong thanks to its wealth of ideas and fantastic soundtrack.

At its most basic, Super Rude Bear Resurrection is a fairly straightforward platformer, tasking you with navigating stages filled with all manner of deadly spikes, arrows, swinging axes, more spikes, and creatures that toss snowballs at you harmlessly--until those snowballs just nudge you to your doom. You'll maneuver through levels using simple jumps and wall jumps. You have no offensive capabilities, and the game doesn’t offer any special abilities to unlock or power-ups to find. You could, in theory, complete any level right from the get-go, although it'll likely take dozens--or, more likely, hundreds--of deaths before you're able to consistently overcome the trickiest obstacles.

The level design shows a tremendous amount of care on the part of developer Alex Rose Games. Stages are meticulously crafted to maximize difficulty without feeling unfair, but they're also created in a way that allows for corpses to ease your path. A carcass might block incoming arrows or give you a safe spot in a row of spikes to jump on, and it can destroy certain traps when it comes into contact with them.

It's easy for the corpses to pile up, particularly due to the way Super Rude Bear Resurrection's levels toy with you. The game plays with your expectations and sets up hazards to punish you for relying on anticipation, rather than your reactions. Many deaths stem from hazards located immediately after checkpoints--these are seemingly placed for the explicit purpose of punishing your eagerness to immediately get back into the action after respawning. You can practically hear Alex Rose chuckling to himself every time you rush into an easily avoidable death. That might explain the mocking remarks of your floating companion, who also delivers the story (and jokes), allows you to destroy corpses in your path, and lets you scout out the areas ahead.

Super Rude Bear Resurrection isn't an especially long game, although seeking out no-death runs, better leaderboard rankings, secret worlds, and dialogue (easy to miss the first time around) provides ample incentive for multiple playthroughs. The primary upside to not being long is also what's most impressive about Super Rude Bear: it never runs out of steam. It feels fresh from beginning to end thanks to the way it consistently sprinkles in new types of challenges over the course of the entire game. Falling spikes, NPCs with hammers, arrow launchers, homing missiles, spinning lasers--you won't play for long without encountering a new idea.

Some of these new ideas introduce interesting ways of interacting with corpses. Deaths caused by missiles and lasers freeze your body into an ice block. In the case of the missiles, ice blocks can provide stepping stones over a gap or block further missiles from being fired, while lasers pull the ice in, thereby preventing the lasers from reaching you on your next life.

"On the strength of its pacing and basic mechanics alone, Super Rude Bear Resurrection would make for an extremely engaging platformer. The addition of its corpse mechanic elevates it to something greater."

Further adding to the variety are the boss fights littered throughout, each with its own unique gimmick that doesn't feel at odds with the platforming framework of the game. One tasks you with avoiding spikes and the attacks of a breakdancing robot while standing on a rising platform. Another requires you to ride a moving platform through an otherwise standard level while avoiding a flying enemy that attempts to knock you off or crush you. The latter was particularly memorable, as being knocked down doesn't guarantee death; provided you're skilled enough, you can jump off of the boss itself and potentially recover. Whereas the bosses in Super Meat Boy have always felt to me more like obstacles that stand in the way of returning to the regular action, Super Rude Bear's boss stages were among my favorites in the game.

Later levels ask a lot, requiring an almost-superhuman level of precision to complete without a death--an accomplishment I couldn't even begin to sniff over the last quarter of the game. Yet, because of instant respawns and an excuse to continue listening to the stellar soundtrack, I never found myself frustrated, even when a particular section would cause me to die dozens of times. In fact, it was often hard not to laugh as I amassed an abundance of corpses (every one of which is dumped into a pile from the top of the screen at the conclusion of a level, just as a reminder). These attempts where I clearly wasn't going to set a new time on the leaderboards often became fun experiments to see just how much I could screw with the design of the level.

In certain cases, the game actually becomes far too easy with even just a few deaths. Thankfully, if you find that to be the case, higher difficulty settings restrict the ability to destroy traps, leave behind corpses, and even use checkpoints. These options give you the flexibility to make the game as difficult as you want, which is great, since it's most satisfying when played at the highest difficulty you can tolerate. The thrill of making it through a tough level with little help is matched by few other platformers I've ever played.

Not everything is quite so well executed, however. Visually, the game isn’t always clear about where you can safely stand or whether a corpse will protect you--spikes or blades sometimes extend beyond a body but won't hurt you. The lack of an overworld is disappointing, if inessential, but the inability to access leaderboards anytime other than at the end of a level feels like an unfortunate oversight. A glitch when changing difficulties would cause the sound to drop out until I paused and unpaused the action. And certain level elements, such as falling icicles, are occasionally triggered before they should be after a respawn, which requires a quick death to reset. Because this only happened after a death, it never cost me a flawless run, but it was nonetheless a small source of frustration.

For all of these minor gripes, none of them stand in the way of enjoying nearly every second of playtime. On the strength of its pacing and basic mechanics alone, Super Rude Bear Resurrection would make for an extremely engaging platformer. The addition of its corpse mechanic elevates it to something greater, allowing it to simultaneously serve as an extreme challenge for the most diehard platforming fans as well as a game that can be enjoyed by the novice crowd. Super Rude Bear Resurrection demands a lot from you, but the satisfaction of success is immense in the end.

View Comments (50)
Back To Top
9
Superb
About GameSpot Reviews 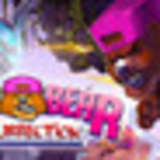 Chris Pereira spent more than a dozen hours dying across the PS4 and PC versions of Super Rude Bear Resurrection. He even finished quite a few levels without leaving behind a corpse. GameSpot was provided with complimentary copies of the game. 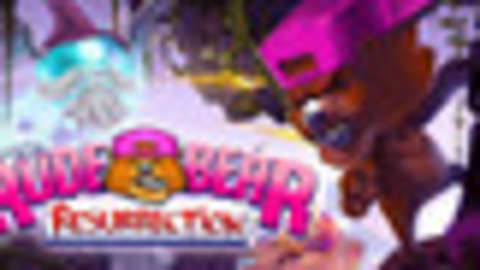