Super Mario 3D Land eases you in with creative level design and tight controls while leaving plenty of challenging content to be discovered.

Mario is one of the hardest-working men in video games. Whether he's competing in the Olympics or exploring outer space, this gaming icon stays busy. Super Mario 3D Land puts the plumber though his paces with yet another search-and-rescue mission to find a missing princess. Along the way it successfully translates the classic, 2D Mario feel into a 3D setting that feels unique from the series' other 3D releases. Some of the game's other features fall disappointingly short of this creative mark, but you’re still left with a fun-filled platformer loaded with content.

In classic Mario fashion, Super Mario 3D Land starts with a kidnapping. Princess Peach has been captured yet again by Bowser, and Mario is the only one who can save her. Your journey takes you through eight themed worlds ranging from deep seas to dusty deserts. Each is loaded with inventive stages that keep you excited to see what lies beyond. These include the five regular stages, a boss stage, and a few special stages. Some of these are locked initially, requiring you to collect star coins--the game’s lone collectable--to access them.

The boss stages almost always have this requirement and take you through the lava-filled castles and high-flying airships of Mario's past. Both of these locations have their own mini-boss encounters waiting at the end: either a battle-on-the-bridge showdown with Bowser or a brawl with some wannabe Koopalings. There are also some familiar special stages, like item-granting mushroom houses and unique mystery boxes. The mystery boxes can reward Mario with additional items--or even star coins--if you can complete the objective before time runs out.

No matter where you are in the game, playing it is a delight, thanks to the tight, simple controls afforded by the 3DS’s circle pad. This means reaching the flagpole won't take you long throughout the first half of Super Mario 3D Land. Stages are designed around a specific linear pathway, unlike the more free-form 3D stages of Super Mario Galaxy 2. This shifts your focus from exploration to speed and execution. In many ways the stages are more reminiscent of the classic, 2D Mario games and do an excellent job of translating their platforming challenges into a 3D environment. The game even encourages speedy runthroughs by recording your best time in each one and displaying it against the other player accounts on your cart.

The fan-favorite tanooki suit also makes its triumphant transition from the 2D era. This item quickly makes up for lost time by being nearly everywhere in the game. It lets Mario slow his midair descent by wagging his little raccoon tail. Several enemies also sport puffy, brown tails, though this hardly changes their attack patterns. Other items include a new boomerang suit that, as you may have guessed, lets Mario throw boomerangs to dispose of enemies at a distance or collect hard-to-reach items. The propeller box from New Super Mario Bros. Wii is also available for when Mario needs a vertical boost.

However, these items pale in comparison to the game's two special assistance items: the invincibility leaf and the p-wing. The invincibility leaf appears after you've failed five times on a stage and grants Mario the white tanooki suit. While wearing this suit, Mario cannot be harmed--unless he falls off the screen--and the effects last until the stage is cleared. The p-wing is unlocked after 10 failures. This item sends Mario straight to the end of the stage. Of course, using these items is completely optional; the game doesn't force them upon you. They also won't appear in stages you've already completed, or in the challenge stages unlocked after the game's completion.

These challenge stages are divided up into worlds that mirror the game's original eight. Some are slight variations, while others are completely unique. Collectively, they raise the game's difficulty with more challenging layouts and carry with them a few extra surprises, including a certain unlockable brother. One feature that doesn't add much to the experience is 3D. The effect is purely optional, meaning the 3D is pure eye candy with minimal impact on the gameplay. At its best, the effect adds a neat sense of depth when you're underwater or a touch of vertigo in the air. But these tricks have been used before, and it would have been nice to see this new feature used in more interesting ways.

Some of the other features also lack creativity. With StreetPass, you can restock your exhausted mushroom houses and challenge cubes simply by passing other 3DS users, even if they don't have the game. This makes it especially easy to rack up star coins, since the challenge cubes are generally a breeze to complete. The gyrometer is used at binocular stations in certain stages. These stations let you search out hidden toads that shriek with delight and throw star coins or other power-ups at you. Despite the fact these features lack the imagination seen in the game’s level design, Super Mario 3D Land is still a delight. With well-realized stages and responsive controls, it's an easy recommendation for all action-loving 3DS owners. 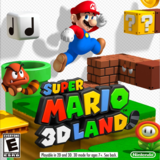