Flight-Plan's Summon Night: Twin Age, the second Nintendo DS game in the series, is yet another lighthearted action role-playing game with adorable sprites. It shares some similarities with its predecessors, specifically the inclusion of a crafting system in addition to dungeon exploration, but differentiates itself by abandoning the franchise's random battles and side-scrolling view. It's a cute candidate for those looking to expand their dungeon-crawler library, but it's also unremarkable in every way.

Twin Age takes place in the world of Clardona, where two races--the humans and the Kascuza--are engaged in a moral war over the spirits of nature. The Kascuza desire to work with the spirits, while the humans long to control them by enslaving summon beasts. Though the war has engulfed most of Clardona it has spared the small isle of Jarazi, where the game's two heroes, Aldo and Reiha, one day witness the spirits succumb to a darkness that causes them to go haywire. The duo embarks on a quest to save the world from the rampaging spirits, eventually journeying to the land of the humans to solve the mystery of the taint. You'll interpret the game's events through the eyes of either Reiha or Aldo, and along the way you're joined by six nonplayable allies who operate as supporting characters, lending their special talents to your cause.

The bulk of the gameplay occurs in dungeons, where you'll guide Aldo, Reiha, and one active supporting character through the map via full stylus control, defeating foes in real time as you work your way to the standard boss. Despite choosing a main character, you're completely free to switch between the pair in the midst of battle, using Aldo's devastating melee attacks or Reiha's powerful spells at a whim. The skill options are numerous and provide some nice variety; for example, you can blast off fireballs as Reiha by tapping a foe, or you can form a wall of lightning by drawing a line through your intended victims. Conversely, you may attack multiple enemies as Aldo by tapping more than one foe, or you can slice them in a line by slashing through several targets. Aldo is also able to switch weapons during combat, and both characters can use items to restore health and spirit points needed to perform skills. Two convenient features make exploring dungeons less of a chore: an autorun option and a fully customizable command palette that lines both sides of the screen to prevent you from constantly shuffling between menus to select attacks. To perform a skill, you just tap its slot on the command palette and then select a target.

That's not to say the system is perfect. Healing becomes cumbersome when allies and foes are bunched up together, because you still have to tap an ally to cast the spell, and it's easy for an enemy to hide your ally from view. You'll encounter the same problem when allies attack gigantic bosses from behind, because the large, creatively designed bosses easily overshadow your 2D sprites. The targeting system's greatest annoyance, however, is that you're forced to manually select a target to attack with a skill, even if you intend to use a skill against a foe you've already targeted. Hence, you can waste time retargeting the same bad guys as you switch between skills, although you can hold down a directional button and select a spell to "lock" it for repeated casts, which is helpful.

Combat in Twin Age can get overwhelming when you're faced with strong enemies, but you have allies watching your back--usually. The AI that directs friendly characters to assist you when you're in trouble is just as likely to stand them in a corner with their backs to the action as you're being mauled. Occasionally your AI buddies get stuck around corners or continuously run into objects until you backtrack to retrieve them. The same problem occurs for creatures that you create to join the fray, but it isn't too inconvenient given that they die quickly. While there are some obvious AI slipups, your allies will take care of themselves for the most part, attacking and using healing items at their own discretion unless you choose to prevent them from doing so.

Twin Age would be quite a shallow experience without its skill trees and crafting system. There is a skill tree available for both Aldo and Reiha, complete with 11 ranks of skills for you to work your way through to eventually unlock special attacks for each character. You acquire skill points by leveling or completing events and then use these points to purchase new skills or increase your proficiency in ones you already know. The crafting system, which is a popular inclusion in previous Summon Night titles, adds some much-needed depth by letting you create your own weapons, armor, and items from materials you've collected from dungeons. The process is significantly cheaper than outright purchasing goods and encourages you to increase the potency of your weapons by adding item effects to them, which is fun if you're into donning the most fashionable weaponry.

The presentation is in line with previous games in the series, retaining the franchise's adorable, detailed sprites and 2D world. The dungeons aren't visually enticing, but they're colorful and varied enough to make for decent exploration, with some featuring a small level of interaction by boasting breakable objects (crates, pots, and so on) and environmental effects like quicksand or swampy, poisonous marshes. The game includes the standard anime-style cutscenes and does have some minimal voice-acting that usually culminates in a quick gasp, character quip, or "boo!" Its adequate yet unremarkable background tunes also pair well with its gameplay.

Twin Age's only real problem is that its 20-hour adventure is undeniably cozy--and little else. Nothing it contains could be considered revolutionary, and its plot and gameplay mechanics, though adequate for the job, are hardly seductive. Still, if you're looking for something that feels familiar rather than fresh, you should get your money's worth in this decent dungeon crawler. 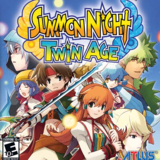