Driving games--especially the subset of driving games that go after the import tuning and underground street racing scene--are on the rise. Thanks to the success of films like The Fast and the Furious and games like Midnight Club 2 and Need for Speed Underground, this subgenre is now in full swing. The British developer Eutechnyx has developed several racing games over the years, including Test Drive Le Mans and Big Mutha Truckers, and now it has an import driving game to call its own in the form of Street Racing Syndicate. The game tries to deliver an authentic street racing experience, but the racing itself tends to be rather unexciting.

Street Racing Syndicate breaks down into a few different modes. Arcade mode lets you choose a car, a race type, and an area so that you can get right down to business. The multiplayer mode lets you race on a split-screen, and it functions pretty well. But the game's depth is found in street mode, which starts out with some inkling of a story but quickly boils down to a fairly standard career mode. Here you'll buy cars, you'll buy parts for your cars, and you'll engage in a variety of races for cash, respect points, girlfriends, or some combination of the three.

When you enter a race, you can also make side bets with the other racers in an attempt to make more money. Money is probably the most important element in SRS, because you'll need it as an ante to enter races. You'll also need it to pay for repairs for your car between races. This makes driving cleanly pretty important, since it's definitely possible to squander most of your race winnings on repairs if you smash into walls and other cars a lot during a series.

The girlfriends aspect of the game is about as shallow as it could possibly be. As you work through your racing career, you unlock respect challenges. Each one is a specific task that is attached to one of the 18 girls in the game. You'll do things like complete checkpoint races, catch air for a long period of time, or follow a car closely without passing or hitting it. If you complete the challenge, you unlock that girl. You'll have to race well to keep girls interested, but bear in mind that you can also steal girls from other drivers by winning races. You can then head off to the warehouse to change girls at any time. The girl you're currently "hooked up" with serves as the flag girl when you race, and she can be lost if you drive poorly, but if you drive well, you can unlock hilariously awful videos featuring these real-life import models.

There are 50 licensed cars in Street Racing Syndicate that come from manufacturers like Nissan, Toyota, Mitsubishi, Lexus, Subaru, and Volkswagen. The lack of the Honda brand sticks out like a sore thumb, especially given the fact that cars like the Civic have, for many, become synonymous with the import racing scene. Still, there is a decent variety of vehicles, and each one handles fairly differently.

You can even further alter the way the cars handle by tricking them out. In street mode, you have access to a lot of different customization options, from weight reduction to exhaust systems. The game uses real brands and lets you run your car on a Dyno to get a look at how it's performing in its current condition. Unfortunately, the impact of a part on your car's horsepower, acceleration, top speed, or other statistics isn't shown as plainly as it should be. If you aren't paying close attention when moving from part to part, you'll miss the numbers as they change. A simple "+2" or "-0.4 seconds" that shows exactly what each part does would have been a huge help here.

Once you get through all of the different modes and options that surround today's driving games, the core of them is all that remains. How well do the cars handle? Does a specific car deliver a good sense of speed? Are the other racers intelligent? These sorts of gameplay questions can make or break a racing game. SRS, to its credit, does a nice job of differentiating its cars from one another. The cars also handle well, approaching simulation in some ways but still focusing more on exaggerated sliding physics than on purely realistic approaches. The cars take damage, but the crashes in the game are unrealistic and extremely dissatisfying. The impacts look soft and weak, and the damage done to the car models doesn't move too far beyond a cracked windshield and a loose hatchback. The physics behind the crash are also subpar. Even a head-on collision just results in a slow spinout that, more often than not, merely gives the other three cars plenty of time to pass you. On top of that, you can often avoid the spin by hitting your nitrous button as you collide, thus letting you power right through the crash with only a drop in speed to hinder you.

The artificial intelligence that governs the racers in SRS is pretty good. You get the impression that the other racers are put on equal footing with you, so you won't catch cars suddenly gaining huge boosts of speed to keep races close, and the drone cars won't mindlessly stick to one line as they race. They move around the track like real racers, and they occasionally make mistakes.

If the AI gets old, the Xbox and PlayStation 2 versions of SRS contain online support for up to four players. There are a handful of different race modes, the most interesting being a pink slip race. When you race for pink slips, you can win your opponent's car--or lose yours. It's an interesting risk vs. reward sort of mode that gives meaning to the online gameplay. SRS performs well online, but unfortunately, playing the game against other players doesn't make it more interesting.

Graphically, Street Racing Syndicate has good car models and decent environments. The pavement has that telltale wet look to it that screams "this is an edgy import racing game," and there's a decent blur effect that kicks in when you push the nitrous button. However, the game doesn't have a particularly good sense of speed to it. As a result, 150mph feels more like 50mph. Even the blur of the nitrous boost doesn't help much here. The game is available on all three console platforms, and the differences between the versions are pretty standard. The Xbox version looks the best and has support for widescreen and progressive scan displays. The PlayStation 2 version isn't as sharp, but looks comparable. The GameCube version of the game has a sketchy frame rate and a rather washed-out look.

With all the different exhaust systems in the game, it's nice that SRS has a good variety of exhaust notes. You'll also notice some subtle differences, such as different shifting noises for different cars. Unfortunately, most of the points earned on the good car sounds are nullified by the game's weak music. The music crosses a few different hip-hop subgenres, but the bulk of what you'll hear sounds like someone decided to start a bad Limp Bizkit tribute band. It doesn't fit the action and is, for the most part, unlistenable. While Xbox users can normally find solace from bad music with the custom soundtrack feature, the Xbox version of SRS doesn't have support for custom soundtracks.

There are some decent ideas in Street Racing Syndicate, but the fairly uninspired interpretation of racing in the game makes it pretty boring overall. SRS attempts to "get real" by including parts, a Dyno, and other items that make it appeal to real-life racers, but the uninteresting action on the streets means that you'll probably want to look elsewhere for your underground street racing thrills. 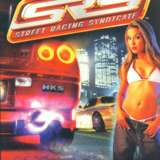