Starlink: Battle for Atlas is a game about flying through space, exploring new planets, and shooting a lot of aliens. Set in a seamless open-world galaxy, it sees you pushing back occupying forces by battling enemies, setting up outposts, and completing simple tasks set by your allies. For better and worse, it's a distinctly Ubisoft game, from the huge spaces (seven separate planets and the vast depths of space that separate them) to the maps overloaded with activities. But thankfully, Starlink is not quite so full that it feels bloated--just full enough so that there's always something for you to be working towards.

Starlink is also Ubisoft's entry into the toys-to-life market--you're able to buy physical packs of pilots, weapons, and ships, all of which are interchangeable and have their own unique attributes and abilities. Constructing and attaching these models to your controller using a specialized mounting device will give you access to those characters and tools in-game, and while swapping between all these components isn't necessary, doing so brings distinct advantages.

Starlink's combat is fun thanks to simple controls and the two weapon system--different enemies are weak against or impervious to different weapon types, and swapping the two weapons mounted on your ship will change your methods of attack and the kinds of elemental combos you can perform. Using a stasis missile on an enemy so that they float helplessly in mid-air, then setting them alight with a flaming minigun, never gets old. Every weapon can be leveled up individually and augmented with mods that you collect, so by the end of the game, your most-used guns will likely be able to absolutely rip through certain enemies, provided you have the foresight to equip them.

When you're grounded on a planet, you'll be doing a lot of strafing and aiming for big glowing weak points, whereas fights in space are more freewheeling, with dogfights often pitting you against swarms of enemy fighters. These feel like all-range mode battles from Star Fox, and swinging around to land a precision assault on an enemy (often thanks to the game's rather generous auto-aim) is satisfying every time. The controls for each ship are the same, but there are minor differences between them; a light ship is better for maneuvering through a delicate situation on the ground, for instance, while a heavier ship can take more hits during battles.

Like weapons, each pilot has their own upgrade tree and unique special ability, and they even get their own unique script during missions, which is a great touch. There are only a few big story-driven missions, and in the back half of the game, you're given some freedom as to how you go about weakening the enemy forces. There's an order of operations in each sector of space--clear out mining sites guarded by enemies to weaken 'Primes,' which are big robot monsters on each planet. Killing Primes on planets that are near each other will weaken a related Dreadnaught, a giant spaceship that will, in turn, produce more Primes if you don't take it out too.

The one drawback to this structure, though, is that you're essentially taking on the same kinds of fights with occasional difficulty spikes. Taking out the game's three Dreadnaughts will make the final boss easier, and you can theoretically take on a Dreadnaught at its maximum strength regardless of how under-leveled you are. It's repetitive, but you also get a good sense of your progression, and the feedback loop of loot and rewards hits a good balance where you rarely feel like you're stuck grinding. The battles might repeat a lot, but they're consistently entertaining, and figuring out the best way to take down a huge enemy with the tools you have on hand is a satisfying challenge. The Dreadnaughts are particularly fun to take down--every time you take out one of their mounted guns a swarm of enemy ships will attack, leading to the game’s most intense dogfighting, and each encounter ends with a Star Wars-inspired "fly into the center and destroy the core" sequence.

If you're playing on Nintendo Switch, you'll have access to Fox McCloud and his Arwing. He can call in one of the other members of Star Fox, complete with the Corneria theme from the original game, and if you're a fan it's very tempting to play as him the entire time. The Switch version consistently runs smoothly, although there's a visual trade-off. The planets are not particularly detailed, everything's a little fuzzier in handheld mode, and there's a lot of pop-in--it's weird to have an asteroid belt suddenly appear in front of you when you're flying towards a planet.

But the Star Fox fan service throughout the game is a great bonus, especially in the mini five-mission campaign in which the team hunts down long-time antagonist Wolf O'Donnell. Wolf is a much more interesting enemy than Andross, as it turns out, and while this campaign is short it feels true to the spirit of the series. Fox and his team get integrated into the rest of the game, too, popping up in cutscenes with the rest of the Starlink crew.

Unfortunately, the game's primary plot--which concerns a crew of adventurers trying to save their captured captain and take down the "Forgotten Legion" forces led by an alien named Grax--is much less exciting. Strangely, despite Battle For Atlas being the first and only existing game in the Starlink series, the script feels as though it's written for players who have a pre-existing relationship with these characters and their situation, meaning that there's not much in the way of pathos or catharsis to be found. Some of the characters are interesting, but even though the game is keen to throw lore at you there's little sense of who these characters are, what sort of universe they exist in, or even what their fundamental role is beyond needing to take down this enemy force.

Despite this, it's always clear what your overarching objectives are and how you need to work towards them. There's a lot that you can be doing at any given point--even in the vastness of outer space, there are wrecks to salvage gear from and enemy outposts to take down. Wrecks can be identified from their flashing beacons and usually contain loot, while outposts are added to your map as you chase outlaws from planets. Exploring the depths of space reveals plenty of neat loot and fun encounters and the thrill of taking off from one planet, seamlessly flying into space, and landing on another never gets old.

But Starlink's proposition as a toys-to-life product is hampered somewhat by the comparative financial value of the digital alternative. The physical starter pack varies in content between consoles, but they each give you far less than both the starter and deluxe digital versions, which unlock multiple ships, pilots, and weapons from the get-go. If you get the physical starter pack and don't want to buy additional toys you can still finish the game, but you'll be at an enormous disadvantage.

Having multiple ships in Starlink essentially operates as having extra lives--if you get wrecked during a battle you can choose to either quit or replace the ship immediately. If you don't have a replacement, certain battles are going to be a real struggle, and progress doesn't carry over when you come back to them. It's easy to lose a ship, too, especially since your defensive options during fights are often limited--you can summon a shield or barrel roll, but both eat into your limited energy supply, which takes a while to recharge. The digital starter pack gives you four ships (five on Switch), which feels fairer and lets you worry less during big battles. Between ships and weapons (pilots are less vital), you'd have to buy quite a few toys if you wanted a varied and balanced experience.

The ship models themselves look great, though, and while switching loadouts via the menus is always going to be the more convenient option, physically swapping out the components will pause the game the until your ship is completely decked out again. Changing pilots will require you to remove the entire ship first, but that's only a minor pain--the only real impediment is being able to remember which weapon does what by sight, but their designs are distinctive enough that this isn't an issue once you get accustomed to it to them.

Starlink is an interesting and enjoyable open-world game, one that fully understands the appeal of exploring new planets and dogfighting in the cold depths of space. With a small fleet of ships at your disposal, it can be a lot of fun to progressively assault and weaken the Forgotten Legion's hold on the galaxy. It's just a shame that if you're interested in the physical models, you'll have to spend more to get the same experience as the digital version. 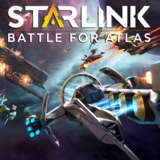 James O'Connor was sent the entire toy line and the Digital Deluxe edition of the game by Ubisoft for review. He tested the toys during his 20-odd hours with the game but preferred the convenience of the digital ships, pilots, and weapons after the first few hours. He's a big Star Fox fan, too.