StarCraft II: Heart of the Swarm's fantastically diverse campaign and entertaining online play make up for its lackluster writing.

It has been almost two years since Starcraft II: Wings of Liberty was released. Since then, fans of the Zerg have been waiting for the Heart of the Swarm expansion to tell that race's side of the story. The time has finally come for the Zerg to get their moment to shine--and shine they do. It's unfortunate that poor writing intrudes on the campaign, because the missions themselves are highly entertaining and varied, and online play provides plenty of cutthroat thrills.

Heart of the Swarm's single-player campaign serves as a great point of entry, boasting 20 missions with diverse objectives. Though they may not be as memorable as some of Wings of Liberty's finest missions (like the train robbery mission or the final stand of the Protoss), that doesn't change the fact that they are wonderful in their own right. One has you infiltrating a Protoss ship with a parasitic larva. After consuming its doomed host, the creature must slink around the ship, hiding from enemy units and collecting biomass until it evolves into a broodmother capable of spawning various Zerg creatures and destroying the vessel's engines and escape pods.

Another great level involves spreading creep (the living purple goo that oozes from Zerg structures) to wake up dormant scourge nests that can shoot down otherwise invincible Dominion ships. Elsewhere, you alternate between controlling Kerrigan's forces and commanding primal Zerg who must destroy the generators that power a psi destroyer device that makes Kerrigan's units explode. Other highlights include commanding Jim Raynor's battlecruiser, The Hyperion, during a space battle; having Kerrigan face off against a series of rivals in boss battles reminiscent of Diablo or World of WarCraft; and triumphing over a battle arena-style mission where AI-controlled infested Terrans act as cannon fodder while Kerrigan marches on a Dominion base. All this diversity keeps the campaign feeling constantly fresh.

One major difference between HOTS and WOL is the new campaign's focus on Kerrigan. Kerrigan gains levels by accomplishing mission objectives, making her hero unit even more powerful, and unlocking a tier of three abilities every 10 levels. You can switch out abilities between levels, and they range from special abilities that make Kerrigan more powerful (like shooting chain lightning with every attack or damaging multiple enemies) to powers that improve the swarm as a whole (like spawning two drones for the price of one). Generally, these are useful enough that all are tempting. However, there is one passive power that resurrects all dead Zerglings for free at your main hive at the rate of 10 or so every 30 seconds. That is pretty hard to pass up. Most Zerg units also gain three unique mutations that you can switch out between levels. For instance, you can fine-tune the acidic suicide bomber banelings to dish out more damage, increase the radius of their explosions, or make their explosions heal friendly units. The ability to switch Kerrigan's abilities and unit mutations between levels allows you to build an army that caters to your play style.

The other major change from WOL relates to research. In WOL, you often had to choose between two upgrades, but you never had the opportunity to test them in advance. In HOTS, you get to develop new strains of various Zerg units, but special evolution missions let you test both possible strains before you make your decision. Possibly the most overpowered example is the ultralisk, which is already the most formidable Zerg ground unit. You can create a strain of ultralisks that are resurrected almost immediately at the exact spot where they died. Couple that with a mutation that increases their health every time they hit a unit, tack on some hive queens following them for healing purposes, and finally add Kerrigan or a pack of antiair units, and you become practically unstoppable. This sort of thing can make HOTS' campaign much easier than WOL, but sometimes it's fun to see what unbalanced, ludicrous action plays out on screen.

Unfortunately, while the campaign is a blast, much of Heart of the Swarm's writing ranges from cliched, to mediocre, to comically bad. The single biggest disappointment is the depiction of Kerrigan. In the original games, when she was the self-described "queen bitch of the universe," Sarah Kerrigan was a great villain. She played the victim card to manipulate others into paving her way to complete dominion over the Zerg swarm. Once that was done, she mercilessly obliterated those useful idiots and mocked their grieving comrades. The old Kerrigan was manipulative, power-hungry, ruthless, and totally unapologetic about it. She had character.

The new Kerrigan is boring, and her actions are often incomprehensible. After a series of happenstances end her (entirely unconvincing) romantic subplot with Jim Raynor, she devotes all her energy toward killing the Dominion's dastardly Emperor Arcturus Mengsk. Of course, to accomplish this, she inevitably has to re-infest herself with Zerg essence and reclaim control of the swarm. This could have been the start of an interesting story about how she reconciles her recently reclaimed humanity with her role in the Zerg army. Unfortunately, Kerrigan's lack of consistency or even a coherent character arc ruins that opportunity. For example, at the end of one mission, she spares the lives of wounded Dominion soldiers, but upon returning to her ship, she orders a broodmother to wipe an entire planet without batting an eye. It feels like she just flips a coin to determine whether she's going to act like Genghis Khan or a bleeding heart.

Besides the campaign, there is, of course, the multiplayer, which remains thrilling whether you are competitive or just in the mood for a comp stomp. All three factions allow for a huge range of strategies. You will destroy and be destroyed in quick rushes and tense, protracted matches. Cloaked units will sneak past your defenses and slip into your base through an unnoticed blind spot. Both sides might simultaneously attack each others' strongholds with enormous air armadas, which is a terrifying circumstance to behold. A giant online community ensures that day or night, you will never hurt for either a ranked or unranked game. It's disappointing, though, that only seven units are new to the expansion.

Two of the new units are improved versions of existing ones. The Terran hellbat is an enhanced take on WOL's hellion, a flame-spewing vehicle that's perfect for burning Zerglings and that can transform into a humanoid mecha unit. The Protoss get the mothership core, which can eventually be upgraded into WOL's mothership, an incredible support ship that, among its other abilities, cloaks all nearby friendly units. The core doesn't have that power, but it can teleport itself and nearby units to a Protoss base of your choosing. Additionally, it detects cloaked units and is useful for blowing up ground units.

On the Zerg side, the fungus-like swarm host can burrow in the ground and release locusts, which are short-lived units that attack ground targets from range. While they are great base defenders in the campaign, they seem more useful for their ability to release locusts and then scurry off. Unfortunately, they are fairly slow and easily killed. The other new Zerg unit is the viper, a flying unit that can obscure the vision of enemy units or grab them with its prehensile tongue. Unfortunately, vipers can regenerate energy only by leeching health off of Zerg structures. Furthermore, air superiority units blow them out of the sky with stunning efficiency. Both of the new Zerg units could be deadly in the hands of a skilled micromanager, but mere mortals may have problems maximizing their potential.

Another new unit is the Terran widow mine, a cloaked contraption that burrows in the ground and fires missiles at any units that get too close. The Protoss, however, get two new air units that help cement their role as the undisputed masters of the skies. Their oracles are support ships that fiddle with the space-time continuum, slowing down enemy units considerably. Tempests are capital ships that have a respectable range and can target both ground and air units. Putting some of those and a few carriers next to a mothership is just nasty. You can't help but feel sorry for the Zerg, who, at least on a nonprofessional level, seem to have a hard time countering a massive aerial offensive.

Unsurprisingly, Heart of the Swarm glows with technical and artistic mastery. The cinematics are beautiful, even when the story veers into absurdity. One fantastically ridiculous sequence involves a masterfully animated fight between Kerrigan and Protoss hero Zeratul. Kerrigan zooms around, leaping 30 feet in the air to dive-bomb Zeratul, whaling on him with both physical and psychic attacks, and finally hurling the poor fellow through a pillar. At this point, she finally stops and asks him why he has come by for a visit. Naturally, he just wanted to help; no fight needed. Levels are attractive and feature diverse locales, including an inhospitable ice planet, heavily urbanized Terran cities, and a primordial world full of dinosaur-like primal Zerg. There are plenty of small details that breathe life into these worlds, like distinct flora and fauna or wreckage from previous battles. The units look great (especially when they are being slaughtered by Zerglings), and the sound design is properly alien.

While Starcraft II is a great real-time strategy game, it hasn't evolved much in light of other strategy games, though that familiarity is part of its appeal. Many fine touches--the "select whole army" button, the clever dialogue when you click on a unit too many times, the hotkeys for unique power--are appreciated, but not new. HOTS also lacks the contextual dialogue you hear in The Battle for Middle-earth or Relic's more recent games. It would be more interesting to hear Kerrigan shout something like "Zerglings, destroy that bunker" or "Retreat to the hive!" rather than incessantly repeat lines like "Mengsk must suffer" and "I am the swarm."

And so Heart of the Swarm is a safe expansion, but it's also an excellent one. If you've spent the last two years hankering to run amok with the delightfully diverse Zerg swarm, you're in luck, because you'll have no trouble scratching that itch with the gameplay you know and love. The lackluster story is disappointing, but taking control of the Zerg--those nutty world-devouring insectoid-dinosaur hybrids--makes Heart of the Swarm well worth the investment. 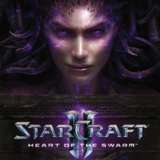