If you enjoy a good shooter, you should give Rogue Squadron a try.

The Rebel Alliance at last has a glimmer of hope. They have just destroyed the Death Star and found new allies in Luke Skywalker and Han Solo. Things might finally be looking up for the freedom fighters of Star Wars, but there is no time to rest on the accomplishments of the past. The Empire remains a powerful adversary that could easily crush the Alliance if it chose to bring its full might to bear. The ragtag fleet that is the Rebellion must still try to establish itself and build a power base sufficient to challenge the Emperor. And to do that, it will need to rely on the skills of the legendary Rogue Squadron.

Rogue Squadron is a good game, albeit a simple one. This isn't X-Wing or TIE Fighter; it's an arcade action game, with floating power-ups, extra lives, and densely populated worlds that exist purely for your shooting enjoyment. Rogue Squadron owes its existence to last year's Shadows of the Empire, an N64 and PC game that was basically a medley of different arcade games. The most popular levels were the Hoth levels, which were basically arcade flight combat over the snowy hills of Hoth. You piloted a snowspeeder, battling Imperial probe droids, AT-ST walkers, and AT-ATs. Rogue Squadron plays like those early Hoth levels from Shadows of the Empire but on a much larger scale. Instead of one craft - the snowspeeder - you can now pilot five, plus a few bonus ships. Instead of the one environment - Hoth - you now visit dozens, from the deserts of Tatooine to the watery world of Mon Calamari. Throughout it all, you pilot one lone craft, with two wingmen at your side, battling a horde of Imperial aircraft and ground troops, fulfilling objectives that will harm the Empire and benefit the fledgling Rebel Alliance.

Rogue Squadron takes place six months after the destruction of the Death Star in Star Wars. Before Luke became a Jedi, he continued to hone his natural piloting skills, and with the help of Wedge Antilles, formed the elite Rebel starfighter group Rogue Squadron. As the aces of the Alliance, Luke and cohorts must engage in a variety of military operations, and that includes everything from escort missions to search and destroy to rescue missions.

There are 16 regular levels to the game, divided into four chapters, as well as a few bonus stages. The levels vary in size, from large to huge. The Hoth level in Shadows of the Empire was fairly small, and these levels are at least four to six times bigger, with many more world objects as well. Hoth was a flat and barren world, but the Tatooine level, for instance, is populated by homesteads, a herd of Bantha, and the port of Mos Eisley. The Kile II military installation is covered with various gun emplacements, barracks, garrisons, and construction yards. The clouds of Taloraan are filled with floating buildings and a giant cloud city, a la Bespin. The different environments you'll encounter in Rogue Squadron include desert, snow, jungle, mountain, urban, lake, snow, volcanic underground, swirling atmospheric clouds, and ocean. Some of the planets encompassed by these environments are Tatooine, Kile II, Kessel, Barkesh, Fest, Taloraan, Mon Calamari, Corellia, and Sullust, These planets have all been cataloged in the various Star Wars comics and novels and should be familiar to many Star Wars fans.

Mission objectives in each of the levels are fairly simple. In Tatooine, you have to destroy all Imperial probe droids and keep casualties to a minimum. In the next mission, on Barkesh, you have to escort a Rebel convoy to a shuttle landing area, battling attacks from Imperial walkers and TIE bombers. Missions never get too complex, although later missions have more-involved mission goals. In the Prisons of Kessel, for example, you have to escort General Madine's shuttle to the main prison complex, disable the shield generators, and then protect his shuttle as he makes his rounds at the other prison facilities, all while battling a swarm of probe droids, TIE interceptors and fighters, AT-ATs, walkers, storm troopers, and speeder bikes. Some missions tend to get tedious, especially when you can't find your next mission objective or are just flying around looking for things to kill, but for the most part, missions move along fairly well. I do wish the radar pointer to your objective was a simple arrow, rather than a cone, but that's a minor grievance.

The game's graphics are outstanding, with beautiful gameworlds and detailed ships and vehicles. The special effects and lighting are impressive. Dust clouds plume from below your ship when you fly too close to the ground, water splashes up when you fire your lasers into lakes, damaged droids tumble end over end into the ground and then explode into shards. Some of the worlds are very beautiful, especially the swirling clouds of Taloraan and the ocean surfaces of Mon Calamari. As for performance, even when dozens of troopers, guns, aircraft, and buildings jam a screen, there is no slow down. The AT-ATs always looked like they were just moving in place, but apart from that, the animation on the vehicles was good. The sprite-based troopers and soldiers didn't look too good close up, but when you're zipping by at high speeds and high altitudes, you won't really notice.

The sound for Rogue Squadron is not as obviously impressive as the graphics, but it shouldn't be dismissed. The familiar score of Star Wars echoes through the chapter briefings and levels, and the whines of TIE fighter engines and the tell-tale sounds of blaster fire bring these Star Wars worlds to life. I did find the voice-overs a little jarring - the characters didn't sound like Luke or Han, but that's because I've grown up hearing their voices, so anything less than the original is bound to disappoint.

Unfortunately, there is no multiplayer support in Rogue Squadron, although you will want to make multiple passes at this game thanks to the secret craft and levels. Rogue Squadron's reward system makes it worthwhile to replay missions, which you can do at any time. Basically, you can finish a mission at four levels. You can complete a level with no medal or finish it with a bronze, silver, or gold medal. A mission debriefing shows you your completion time, kills, saves, accuracy, and any bonuses collected. You can beat the game without any medals, but you won't advance in rank. More importantly, winning those medals will open up the game's secrets.

Playing Rogue Squadron is a snap, because the action is straightforward and fun. There is always something to kill and clear mission objectives for you to follow. Don't go into this expecting a revolutionary space sim on the level of Descent: Freespace or TIE Fighter. There is a reason why GameSpot puts this game in the action genre - it's an arcade game. This isn't Wing Commander or Independence War, but if you enjoy a good shooter, you should give Rogue Squadron a try. The Alliance could always use a few good pilots. 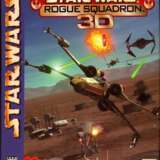