The sum of Revenge of the Sith's parts is simply a repetitious and fleeting experience that won't appeal to anyone outside of Star Wars' most devoted audience.

Last month's Lego Star Wars may go down in history as the only Star Wars game based specifically within the storylines of George Lucas' recent prequels to actually be any good. This somewhat disheartening statement is solidified by the most recent game based on one of the films, Star Wars Episode III: Revenge of the Sith for the PlayStation 2 and Xbox. Revenge of the Sith certainly had a great deal of potential, featuring lots of scenes taken directly from the film that currently isn't even out yet, lots of lightsaber dueling, and 16 missions based around action-packed sequences from the film (as well as a few bonus missions). Unfortunately, the scenes taken from the movie give an awful lot of the upcoming movie away while still leaving out too much story to be relevant. Meanwhile, the lightsaber dueling is ultimately too repetitive and easily exploited to be very fun for long, and each of the 16 missions (and subsequent bonus missions) don't take more than 10 to 20 minutes apiece to complete. As a result, the sum of Revenge of the Sith's parts is simply a repetitious and fleeting experience that won't appeal to anyone outside of Star Wars' most devoted audience.

If you've been keeping up with movie news over the last year or so, you probably already know the majority of the plot details for Lucas' third and final Star Wars prequel. Needless to say, the game follows that storyline almost exclusively, albeit in somewhat of a dubious fashion. In Revenge of the Sith, you play as both Ewan McGregor's Obi-Wan Kenobi and Hayden Christensen's Anakin Skywalker (although neither actor actually plays his role for the purposes of the game), and the game version of the story focuses almost entirely on events directly related to these two characters, almost completely ignoring any of the other major players, save for when those major players happen to be involved in an action sequence with one or both members of the twosome. As you probably would expect, Revenge of the Sith is an extremely spoiler-heavy game, giving away a lot of plot details, as well as the ending of the film (although a somewhat truncated version of it). Actually, the truncation of the storyline is the most problematic aspect of it. Most of the edits the developer made were seemingly done to keep the action moving. So little, if any, of the real drama from the upcoming movie seems to have made it in here...assuming there is any, of course. Mainly it's just a lot of swordfighting and blaster shooting, with little bouts of emotionless shouting between the main characters. Perhaps once the film is out and everyone's seen it, filling in the blanks will be less of a problem. And maybe then the game's method of storytelling will seem less disjointed (since you'll already know what's going on). But on its own, the game is kind of a mess.

Fundamentally, Revenge of the Sith is a beat-'em-up in which the characters have lightsabers and Force powers instead of fists and knives. Both Anakin and Obi-Wan control exactly the same at the beginning of the game. You've got a few different types of lightsaber attacks that can be strung together into some basic combos, as well as the ability to manipulate the Force in all sorts of crazy ways, like being able to levitate objects and people, project energy blasts, and even use the old Jedi mind trick to turn your enemies against one another. Through the early portions, you don't get access to any of the particularly good combos or Force powers, so you'll find yourself executing a whole lot of the same moves over and over again, which becomes extremely tedious. Once you get a little over halfway through the game, however, the combos start becoming deeper, and the roster of Force powers becomes a lot more fun to play around with. Sadly, some other problems pretty much knock the wind from the gameplay's sails right quick, though.

For one thing, the game is altogether much, much too easy. Two-thirds of the time, you're just running around linear levels, cutting up easy-to-kill droids that barely put up a fight, let alone enough of a fight to even damage you if you just hold down the block button. Periodically, this tedium is broken up by some slow-paced and dull turret-shooting sequences. However, all they do is desperately make you want to get back to cutting up robots. Later in the game, you start fighting some more-fearsome foes, including some bosses that represent major players in the storyline. Here, you'll basically be indulging in some fairly epic, though still altogether too easy, lightsaber duels where you'll actually have to periodically make use of your dodge and counter moves. Though, again, you won't use them as much as you'll just have to hold down the block button and wait for a quick chance to strike. The overpowered block really does wreck a lot of the fun, as it's incredibly easy to just avoid getting hit at all by most enemies. The characters you duel with do have some block-breaking moves, but they don't do a whole lot of damage. It's also entirely too easy to just back an enemy into a corner and just keep hammering on the attack button. Eventually your opponent will get his or her block up, but he or she will take a lot of damage before doing so.

It also doesn't help that Revenge of the Sith's story mode can be beaten in about five or fewer hours. Yes, there are hidden items and upgrades to find if you go back and play through it a second time, but they're not really worth it, as few of the unlockable extras really merit the effort. Apart from a few bonus missions (including some where you play as Yoda and Darth Vader), a lot of concept art, and an alternate ending that plays out the final confrontation from the other perspective (which actually seems pretty thrown-together and isn't very interesting), there's just not a lot here worth unlocking. The game does have its two multiplayer components, but neither is very good. There's a cooperative mode where you and a friend basically run through a level while cutting up scads of robots together in one long, boring sequence. Additionally, there's a duel mode where you and said friend can pick from any of the available duelists to get your lightsaber battle on in what feels like a really watered-down fighting game. Were there more actual depth and less in the way of exploits in the lightsaber combat, the duel mode actually could have been pretty cool. But as it stands, it's just not very fun for more than a couple of plays.

The one thing Revenge of the Sith does have going for it, without too many caveats, is graphics. As these types of games go, Revenge of the Sith is one of the nicer ones in terms of character and environmental detail. The models for all the main characters look a whole lot like the real-life actors, and there's quite a bit of varying animation for each. Unfortunately, some of the transitional animations aren't nearly as good, leading to some occasionally stilted movements. There are a number of different levels, though several of them are grouped together on a single world, ship, or what have you. Still, each one looks quite nice, with plenty of action going on in the background and even some sections you can damage with your lightsaber. The game uses an exclusive cinematic camera that does have some problems with shifting to a bad angle: one that's away from the guys that are shooting at you. The frame rate will chop up from time to time if too many things are exploding onscreen at once, but overall, this is a pretty great-looking game.

The audio isn't so great, though. Yes, John Williams' epic score is on hand, although the music in Revenge of the Sith seems to have been lifted from other movies rather than from the upcoming one (unless Williams just got lazy and reused all his old music for the movie). All the usual sounds you'd associate with a Star Wars movie or game are here, from the whooshes of lightsabers to pings of blaster fire, and all that stuff does sound quite excellent. Unfortunately, the voice acting really drags down the overall audio experience. Anakin and Obi-Wan, again, aren't voiced by the film actors, and the actors who do voice them just don't do very good jobs at all. Anakin's lines are especially stilted, and even more so away from cutscenes. When Obi-Wan and Anakin are trading quips back and forth, it's all so ham-fisted and repetitive that you'll beg for an option to turn it off. Few of the other soundalike actors are much better, and all this is compounded even further by the actual scenes taken from the movie, which actually feature dialogue that isn't horrible. It's just an erratic experience all around, however.

Star Wars Episode III: Revenge of the Sith is being billed by many as the film that will redeem Lucas' series of prequels. However, Revenge of the Sith, the game, redeems nothing. It begins badly, starts to get better, and then leaves you in the lurch. This is just a short and shallow game that brings neat ideas to the table and ultimately never capitalizes on. The biggest fans of all things Star Wars could probably make an OK rental out of Revenge of the Sith, if only to get an early look at what the movie will entail, as well as to gobble up all the extras. Anybody that doesn't fit into that category would probably just be better off waiting for the movie, while skipping the game altogether.

View Comments (1)
Back To Top
6.3
Fair
About GameSpot Reviews 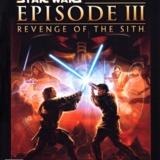 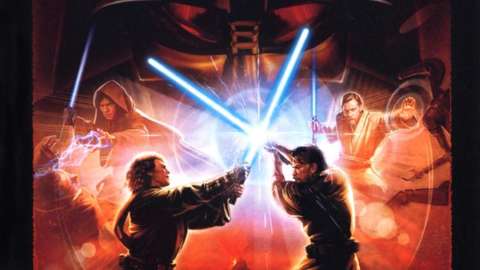 Based on the third episode of the Star Wars trilogy, Star Wars Episode III: Revenge of the Sith promises an authentic Jedi experience. The third-person action game follows Anakin Skywalker and Obi-Wan Kenobi as they fight enemies, learn new skills, and pull off combo moves.

7.8
Sign In to rate Star Wars Episode III: Revenge of the Sith