It's been seven years since the release of the last Star Ocean game, with tri-Ace and Square Enix's lauded science fiction RPG series laying dormant. Star Ocean: Integrity and Faithlessness (or Star Ocean 5) breaks this silence, but after exceeding 30 hours buried in its beautiful yet barren world it's difficult not to feel disappointed. Its story and characters are underdeveloped, its mission design fluctuates between vapid and downright tedious, and despite gratifyingly complex combat and skill upgrade systems, the game is weighed down by a host of frustrating smaller problems.

Broadly speaking, Integrity and Faithlessness is a story about first contact with alien life. Fidel and his childhood friend Miki choose to involve themselves in their home planet's civil war, and along the way discover a bigger problem. Technologically advanced beings from another world have landed on their planet and are using it for nefarious purposes. Along the way, Fidel gathers a ragtag band of scientists, soldiers, and space pilots as he finds, loses, finds again, loses again, and eventually tries to rescue a mysterious little girl named Relia.

The first contact story has been done better elsewhere--numerous times over--and the rest of Star Ocean 5's narrative elements fall equally flat. The characters are bland with little to no emotional development, and feel more like a list of tropes than a believable group of friends, making it difficult to care about their trials. Dialogue is about as subtle as a dump truck, and the unfolding plot does a poor job of communicating why these six strangers have decided to band together and risk their lives to save one little girl. There is a lot of melodrama between them with no power behind it. The relationship between Fidel--a late-teens boy--with Relia--who is maybe five years old at most--is particularly distressing, with lines like "Without you there's no chance I can be happy!" coloring awkward tonal shifts. They do not grow together; rather they take confusing emotional leaps, and for this reason it is difficult to invest in their journey.

The world of Star Ocean 5 is big and beautiful, but feels just as empty as its characters. Open fields of detailed emerald grass shimmer under clear blue skies. Sunlight bounces off rocky mountains in the distance. Deserts are a deep, dark blur of brown as the wind whips sand around your party, and technology labs sparkle and shine with walls of glinting metal and glowing light. These areas are vast, and the dungeons you find hidden in corners of the world are mazes of corridors dotted with treasures. But none of it feels alive. Enemy creatures spawn in clumps at generous intervals throughout each area, but if you leave and come back the same enemies will appear in the same spots without fail. It's a predictable and shallow world, which makes it a chore to complete quests that require a lot of backtracking on foot through the same areas.

Most missions, both in the main story and side quests, include a lot of said backtracking, and the game adds insult to injury by not including a readily available world map. There's a local map you can reference, but you can't look at areas beyond it. If you forget where a certain town or facility is, you're doomed to wander until you find it or remember until you unlock fast travel towards the end of the game. It's easy to get lost. You're also prevented from entering certain areas until you've progressed far enough in the story, gating you on a mostly linear path and preventing you from exploring at will. The world looks vast and beautiful, but this rigidity and emptiness makes traversal unenjoyable.

Star Ocean 5 is at its best when you're in combat. All characters in your party fight at once, though you can only directly control one at a time. You can swap between characters on the fly, which comes in handy during tougher boss battles where you may want to oversee healing efforts yourself. At its biggest, your party has two casters, two swordsmen, a melee brawler and a ranged attacker--as well as Relia, who can't do anything besides heal. Battles are a flurry of motion and light, and are an absolute delight to take part it. Even longer, tougher boss battles are welcome challenges, and your team dancing around the battlefield in real time is a gorgeous display. That is, if you properly develop and assign combat roles and skills prior to the skirmish.

Combat roles are unlocked by defeating enemies and collecting special points. You spend these points on upgrading roles, which determine the behavior of your characters in battle. For example, you can unlock healing roles that prioritize casting spells and assign them all to one character, putting them in charge of buffing the party and debuffing enemies. Or you can give roles that prioritize the use of special attacks to your casters, which insures they keep out of harm's way while still dealing the highest damage. You can also combine points and special items hidden throughout the world to unlock special, more powerful attacks that are unique to each character. These attacks can be lined up so that characters automatically perform them on the battlefield, or manually executed if you switch to a specific character. This all creates deep levels of customization within your fighting party, and taking the time to unlock, develop, and assign combat roles and skills makes fighting a visual treat and a breeze to navigate. Cooking up assignments and strategies before major boss battles was a highlight of my time with Star Ocean 5.

Outside of battles, missions suffer from agonizing objectives. Too many large-scale battles come with the caveat of having to protect a certain character from dying while fending off waves of enemies, adding some much-unwelcome tower defense into the mix. Some combat missions involve seemingly never-ending waves of enemies with no direction for defeating them, and so you battle on and on until you realize you have to make an attempt to escape the area. Still others pit you against enemies you can deal no damage too, and force you to burn up your magic and health points until dialogue leading up to the introduction of a macguffin plays itself out. These missions are poorly designed, an egregious abuse of your time and tools, and become wars of attrition very quickly.

Side quests also suffer from this tedium. Some involve you conversing with characters in your party to get to know them better. In theory, the more you interact with certain characters, the more likely they are to heal you or assist you in battle, or go into an attacking rage should Fidel be knocked out. I spent a lot of time completing these drab, unentertaining side stories and noticed no difference in how other characters helped Fidel in combat. Maybe I was too busy trying to hear what they were saying over the din of battle, but in truth my efforts didn't feel like they made a difference.

Speciality skills--including crafting, scavenging, emoting, and having treasure and enemies appear on the minimap--are unlocked by completing side quests. All of these, with the exception of the first two, are unlocked by completing fetch quests marked on quest boards in every major town. These entail bringing certain items collected on your journey back to the board or hunting down and talking to certain NPCs. There's no way to know if or how you collected certain items, as most of them are obtained through drops from random encounters. There is also no indicator where in the world you can find certain things--you have to do the trial and error on your own and it's nearly impossible to track your progress.

It's also possible that you will never unlock certain specialities because you never complete enough or the right kind of quests; I went through the entire game having unlocked a fraction of these specialities. Crafting is opened up by completing a handful of banal fetch quests for a girl named Welch, and the feature itself isn't worth the trouble when you can pick up or buy the most powerful items anyway as you progress through the story. These side quests are a complete waste of time, and you can make it through the game having not completed any.

In addition to all this, Star Ocean 5 suffers from some very strange technical issues. Characters constantly talk over each other. Side-conversations begin over talks pertaining to the plot, and if you're talking and run into a random encounter, the conversation will continue beneath the sounds of combat. Too often, while in a boss battle or major conflict, characters would have conversations key to the plot. In these circumstances, unless you've had the foresight to fiddle with the sound settings beforehand, you won't hear any of it. Pivotal conversations were lost to me over the clash of swords and spells, and you can miss important plot points if your subtitles aren't on or you didn't change the audio settings. Oversights like this are unforgivable.

Also, Fidel can bump into and physically move NPCs but will walk straight through his teammates like they're ghosts. It's incredibly jarring and pulls your right out of the experience. There is no autosave and the game's manual save points are infuriatingly few and far between. There are also parts of the story where the game actively blocks you from saving. There was a moment between large battles that I ran into an inn hoping to use the save point, but the game wouldn't let me save. When I failed the second battle, I had restart from before the first one, which also included a lengthy, unskippable cutscene that further wasted my time. Running a gauntlet without reprieve is unnecessary, and doesn't serve to add a challenge--only frustration.

In the end, Star Ocean: Integrity and Faithlessness' payoff was not worth the time I put into it. The story feels bloated and empty, with no worthwhile emotional payoff in character development or narrative. Combat and its subsequent upgrade systems are genuinely fun, but the overall experience is held back from being great by issues elsewhere. As a fan of Japanese role-playing games, it's heartbreaking to not be in love with Star Ocean 5, but it holds too tightly onto outdated character tropes and concepts--like the unfair save point system--that make it feel dated and out of touch. If you came to this game seeking the epic sci-fi glory of the series' early years, this is not the Star Ocean you are looking for. 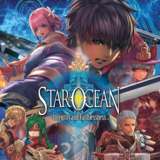 Alexa Ray Corriea spent more than 30 hours exploring Star Ocean: Integrity and Faithlessness, completing the main quest and numerous side stories. A copy of the game was provided by Square Enix.