More than just an upgrade of the original, SSX Tricky is the best snowboarding game ever made.

SSX came out of nowhere last year to become the PlayStation 2's flagship launch game. Its impressive graphics, addictive gameplay, and flair for all things cool convinced people who normally wouldn't give a snowboarding game a chance to take a risk. SSX Tricky was originally conceived to be an addendum to the original with new riders and reworked tracks, but as time wore on, it became apparent that it would be much more than that. And now that it's here, it's obvious that EA has managed to produce a game that improves upon the original in every way and provides enough new content to keep fans of the original from crying foul.

SSX Tricky is set one year after the original game, and two of the riders from the original SSX have taken a sabbatical, only to be replaced by a stable of five young guns with even more personality. The foundation of the game remains as the world circuit, in which you must compete against six other riders in circuits composed of three runs down the same hill. As you win bronze, silver, or gold medals in each circuit, new tracks and boards are unlocked and attribute points are awarded to enhance the abilities of your rider. Unlike in last year's game, in which the third and final race in each circuit was much more difficult than the prior two, the AI has been refined so that the difficulty for each race gradually builds to a crescendo for the final run. The showoff mode has returned from last year's world circuit, and once again, you must make a run down the hill by yourself in hopes of amassing enough trick points to win medals. In SSX, you could max out your rider's attributes simply by competing in races, but in Tricky, you'll have to complete the showoff mode as well if you want to get the most from your character. If you don't have time to dive into the world circuit, you can always choose the single-event option for some quick-hit fun. You can practice the runs included in the world circuit in the race option, polish your tricking skills in the showoff mode, or go head-to-head with a friend in the multiplayer option. SSX Tricky's game design is nearly identical to that of the original SSX, but that's not necessarily a bad thing.

The biggest change to SSX Tricky is its trick system. Pulling off various grabs, flips, and spins is still accomplished by pressing combinations of the shoulder buttons and the directional pad, but when the adrenaline meter reaches the top, you have 20 seconds to perform one of each character's four uber tricks. The outlandish uber tricks come in a variety of forms, like performing breakdancing moves on top of the board or lying flat and spinning like a torpedo. Once an uber trick has been landed, you are awarded one letter toward spelling the word "tricky." When the entire word is complete, you receive a full turbo for the remainder of the race and the ability to pull off some of the game's impressive supertricks. The addition of the new trick system makes an already exciting game even more invigorating, and it forces you to look at the courses in a new way. Last year's SSX had a lot of personality, and EA has decided to up the ante in this regard. Before each race, the other competitors are rated as allies, enemies, or neutral. Enemies will attempt to take you down if given the chance, allies will warn you of impending danger or attempt to shield you from attacks, and neutral riders will go about their business with little regard for others on the course. How you treat other riders affects their ratings for future races, so if you anger too many competitors by attacking them, it's going to be difficult to make it down the hill in one piece later on.

The original SSX was the most visually impressive game available at the launch of the PlayStation 2, but this is one area of SSX Tricky that seems to have been only minimally improved. Texture clarity has been bumped up, and there is liberal use of volumetric fog in several courses, but most will have a hard time seeing the improvements. With that said, SSX Tricky looks great. There is no draw-in, the particle effects used for snow are some of the most impressive on the platform, and the courses are absolutely huge. Seven of the courses have returned from the original SSX, but only their names and texture sets have been replicated. Dozens of new shortcuts have been added to each course, and their layouts have been so drastically altered that they feel entirely new. EA has also added two completely new tracks, including Alaska--a vertical run that provides some of the biggest air in the game--and Garibaldi--a nice but relatively short course for beginners. The tracks and special effects may look great, but the real star of the SSX Tricky show is the animation. Regardless of whether you're pulling a simple method or one of the game's astounding supermoves, the riders animate with a fluidity that few sports games can match. It goes a long way toward making what are impossible moves look not only good, but also plausible in the real world. Cinematics weren't a big part of the first SSX, but that has changed for Tricky. In between races, short cinematics will show riders interacting with one another based upon their aggression ratings. If you've angered someone out on the course, you can bet you will hear about it later, and if you're in close competition with one of the other riders, expect some serious smack talking to ensue. Frame rate dropouts were an issue in last year's game, and the same problem rears its ugly head in Tricky as well. It's not enough to significantly detract from the gameplay, but it's still worthy of mention. SSX Tricky may not be a drastic improvement upon the original where graphics are concerned, but when the bar has already been set so high, one can only expect so much.

GameSpot handed SSX the award for best sound last year, and EA seems intent on defending its crown. A gaggle of celebrity voice talent, including that of Lucy Liu, Macy Gray, and David Arquette, is included in SSX Tricky. It doesn't make much of a difference, really, as the voice acting in the original game was just fine, but it's good to see that the developers have attempted to improve upon a part of the game that has already received unanimous praise. Mixmaster Mike of the Beastie Boys handled the music for the game, and again, it's excellent. The tempo of each track being played will change depending upon the action onscreen, and scratches are thrown into the mix after especially impressive tricks are stomped. Loops from Run DMC's title track are heard when you land an uber trick or when your adrenaline meter reaches its hilt, and the pitch is adjusted on the fly so that it matches the beat of the song being played. Several of the songs from the first SSX have returned for an encore, so you can expect the same breakbeat-influenced tunes.

More than just an upgrade of the original, SSX Tricky is the best snowboarding game ever made. EA Sports Big has proven that it's not afraid to break new ground and that resting on its laurels is not an option. The trick system has been vastly improved, the graphics have received a slight upgrade, the story elements have increased significantly, and the sound is as solid as ever. If you were a fan of last year's game, SSX Tricky adds enough new elements to the mix to make it worth a look. If you have yet to play SSX and are interested in this sort of game, buying SSX Tricky is highly recommended. 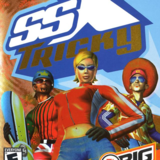 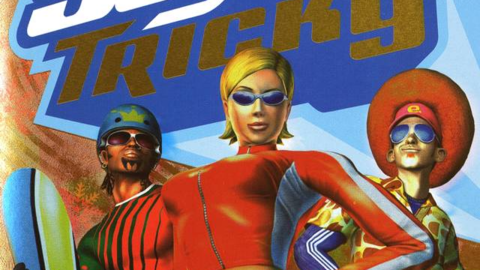 More than just an upgrade of the original, SSX Tricky is the best snowboarding game ever made.