You would think that the best part of a game called 'Splosion Man would be, well, exploding. But going kaboom in Twisted Pixel's new platformer for Xbox Live is actually sort of beside the point. Blowing up is just a different way to jump, so the real draw here is a seemingly never-ending succession of perfectly designed levels loaded with death-defying leaps and comic-book hazards. This speedy game is tough to put down once you get on a roll.

As with all the best platformers, the concept is simple. You are 'Splosion Man, a goofy lab experiment gone wrong who can blow himself up on demand. His only limitation is being unable to explode more than three times in succession without a quickie recharge back on terra firma or by sliding down a wall. All these controlled detonations hurl 'Splosion Man into the air, so you basically have a dynamite-powered triple jump that also works nicely as an attack. The mad-scientist laboratories in which the game takes place have been designed to let you show off this ability in the wackiest ways possible. So you time your blowups to bounce off walls and to steer clear of cliched platform hazards like acid lakes, freezing water, spike wheels, crushing walls, and laser beams. You can also play cherry bomb to take out enemies such as mad scientists and their robotic minions. All in all, you're a bit like a gunpowder-enhanced Sonic, exploding all over the place like a twisting, turning, somersaulting missile.

Regularly placed save points and infinite lives ease the challenge of all this zany blasting around somewhat, in that you don't have to be perfect all the way through a level. But these saves are still far enough apart that you generally have to complete at least four or five killer moves over a succession of deadly obstacles. It all plays out very fast. You feel like a psychotic stuntman pulling off never-ending trick combos. The insanity generally starts with a mad scientist fleeing in terror from 'Splosion Man and pulling a lever that blocks the way forward with a force field. To clear the path, you need to blow yourself up across a bunch of hazards, maybe jump on a few floating platforms, and then open the force field by killing the scientist, usually with a trick like causing a wall to fall on him. Everything is jazzed up with explosive barrels and other substances that propel 'Splosion Man like he was shot out of a carnival cannon. These accoutrements are necessary to survive, as they give you enough extra oomph to explode over high obstacles or fly past lakes of acid or icy water. Do it all right, and you live to explode another day. Mess up, and you're dumped back to square one. Die enough times in one spot, however, and the game kicks in the "way of the coward" option that lets you skip the level. This feature is perfectly calibrated, coming up at pretty much exactly the point where frustration might begin to overwhelm fun.

It's all very addictive and kooky. The levels move so fast that it's hard to get annoyed even when you get stuck. Getting killed and being ported back to the save point happens so quickly that even a long series of failed attempts seems like uninterrupted gameplay. Even while you're getting slaughtered by a particularly tough level, you never fall into a "that's impossible" mindset and give up. All of the leaps seem doable from the very first attempt, which keeps you hooked even in the midst of nonstop failure. The game looks and sounds hilariously cartoonish as well, helping you maintain a lighthearted attitude. 'Splosion Man himself looks like some kind of electrified stick figure (and also a bit like Warlock, a cult superhero from the X-Men comics in the '80s). Every movement is wildly exaggerated, from his psychotic smile to how he juggles fireballs when you take a breather. The laboratory levels are on the plain side, being populated with little more than hazards, mad scientists, and background destructible objects like soda machines. But even here the developers have tossed in some fun frills, like the way that the mad scientists spew out luncheon meats like porky pinatas every time you blow them up. The game's audio is equally bizarre. 'Splosion Man constantly mutters and laughs to himself and yells goofy comments like "Giddy-up!" in tight spots. The music is loaded with distinctive, weird choruses and bouncy beats reminiscent of a good Danny Elfman score of a kids' movie.

Only a couple of minor problems interfere with all of this explosive goodness. Repetition is a bit of an issue. Although the 50 solo levels mix things up, you're doing the same exploding/jumping shtick over and over again. Don't expect to get in any five- or six-hour marathon play sessions, unless you've got a lot of patience and bionic thumbs. This makes the cooperative mode of play locally or over Xbox Live a bit of a stretch, too. The challenges just aren't varied enough to lend themselves to this sort of gameplay. There is also way too much emphasis on using each other's kabooms to propel yourself higher and higher. You need to have perfect timing to play cooperatively, which is great if you've got a buddy beside you on the couch but not so hot if you're looking for a teammate randomly over Xbox Live. And camera angles can sometimes switch to a new location that obscures hazards after you get killed. All of the 3D visuals are displayed on a 2D plane, so the camera changes aren't wildly different, but sometimes a little means a lot in a twitch game like this.

For a very reasonable 800 XBL points, 'Splosion Man is a blast. This is one of the most original platformers to come down the road in a while and is one that just might be good enough and addictive enough to spawn a new franchise. 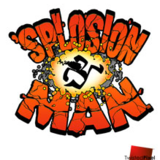