Die and die again, with a smile on your face.

The snake strikes with a calculated stream of acid. Wise explorers understand such dangerous tendencies, keeping distance between themselves and their serpentine foe. Time your movements precisely, and you can attack when the snake is at its most vulnerable. Emboldened by this knowledge, you move toward the slithering creature, ready to exterminate it as you continue deeper into the mine, only to be ambushed by a spider hiding above. Death is sprung upon you so mercilessly in Spelunky that you never know when your end is going to come. Because so many endeavors end in less than five minutes, Spelunky is a perfect fit on the Vita, allowing you to play at any moment for just a little while, and then find yourself consumed entirely by this extraordinary adventure.

As you enter an underground mine to begin your adventure, you're greeted by a series of randomly generated levels populated by all manner of traps, enemies, and treasure. Initially, Spelunky is indistinguishable from a typical 2D platformer. You whip snakes, leap ravines, rescue damsels, and exit through the door to the next stage. Accidentally trigger that arrow trap or get overwhelmed by the slow-moving bats, however, and you find that punishment is severe. When you die, you restart from the beginning of the game. The cash you earned? The items you collected? All gone.

Progress comes not from tangible rewards but rather from the information you acquire. The first time you encounter an arrow trap, you fall blissfully past it, only to find a feathered shaft lodged in your abdomen. The next time, you aren't quite so ignorant. Drop a rock or a dead caveman to trigger the barrage, and then walk peacefully past the arrow trap once its ammunition is spent. You learn that spiders often hide in pots, that yetis have a fierce temper, and that you should never ignore a pile of lifeless bones. With dangers all around, you keep your head on a swivel, aware of the spiders overhead, the explosive frog down below, or the ice-spewing mammoth just offscreen.

Your death count spirals ever higher. One dozen, one hundred, one thousand, and every one of those spent lives has made you better. No longer do you drop from a ledge without ensuring there aren't spikes waiting for you below, and you've learned to avoid dawdling lest a ghost chase you to the grave. And yet, even the most vigilant explorer will find a brutal end. The random elements conspire to make your adventure troublesome. With three rescued damsels and a compass, you may feel secure as you venture forth in the ice caves. But only one misstep as you flee from a pursing alien is enough to cut your run short. Still, you press on. There's so much thrill in succeeding that you can't help starting again, and you know that if you're careful, you can survive your quest. Except that's one big if.

Several tweaks have lessened the frustrations that existed in the Xbox 360 version. First, stray objects rarely hurt you. Previously, you could lose a heart when a rock or arrow bounced toward you, which is maddening when health is at such a premium. Changing that aspect means that every death is usually your fault, so you have no one else to blame for failures. The second change is also much appreciated. Helpers can still be hired or found within the labyrinthine stages who are happy to do your dirty work. Before, you could expect these friends to cause havoc by attacking shopkeepers. The added chaos made taking someone along with you a masochistic decision. Now, your buddies behave properly, and even though they aren't smart, having a bodyguard nearby makes it slightly easier to brave the many dangers.

Purchasing Spelunky on the PlayStation Network gives you access to both the PlayStation 3 and Vita versions of the game. Cross-saves allow you to continue to work on opening the shortcuts whether you're sitting on your couch or embarking on your daily commute. Though you still must start fresh each time you play, you can earn shortcuts as you go along, and this progress is preserved no matter which system you use. Dedicated adventurers may eschew these passages in search of greater secrets and rewards, but carving a path straight to the temple is a challenge of its own. After you repeatedly fail to meet the Tunnel Man's high demands, there's a feeling of unabashed satisfaction when you finally deliver the goods necessary to unlock that path.

If you're overwhelmed by the challenge, you can venture forth with up to three friends by your side. PlayStation 3 players share their screen, which means you must move in a slow, coordinated manner unless you want to leave your buddy out of sight with a skeleton lurking. This form of co-op is fun yet flawed, but there's a new way to experience teamwork that elevates Spelunky to unprecedented heights. By linking your Vita to the PlayStation 3 or other Vitas, you can contain your exploits to your own screen. You can have two friends playing on their Vitas while two more team up on the PlayStation 3, opening up the door for some wild and hilarious situations. Just be aware that lag is a problem depending on your wireless connection.

Being able to play across different systems is a huge improvement. Now, you can explore where you want at your own pace. You may tempt fate by filching the idol while your friend avoids spikes and scorpions to rescue the damsel. Once you trigger the booby trap and that boulder starts rolling, it's every adventurer for themselves, and the added chaos is utterly delightful. Another time, you may uncover a jetpack, the most prized possession in Spelunky. After gloating about your prize for too long, one of your conniving friends may commandeer it right from under your nose. All is fair in love and Spelunky. After you settle down from your new found freedom, you learn to trust each other, canvasing areas in smart ways, as you combine your adventuring might to finally overcome Olmec. Considering the high difficulty and strategy the later levels require, achieving victory as a team is a huge accomplishment, and only makes you hungry to see what more you can do when joined together.

After first surfacing on the Xbox 360 and PC, Spelunky has finally found its ideal match on the Vita. Being able to spend a few minutes excavating whenever the mood strikes you works incredibly well for a game in which death is quick and severe, and the big screen and solid controls ensure that even longer play sessions are an utter delight. Couple that portability with a reinvented cooperative mode that uses whatever combination of Vitas and PlayStation 3s you want, and you have the best version yet of a game that is already one of the most exciting and dynamic platformers in recent memory. Do not miss this incredible adventure. 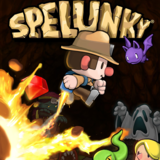 Tom has a two-hour commute to work each day. Don't feel sorry for him, though, because he happily rides the rails while trying desperately to finally reach Hell.