Soulcalibur returns with the same deep fighting system and a new online mode that makes it an easy game to recommend.

When Soul Calibur was released for the Dreamcast in 1999, it set a new standard for fighting games on home consoles. Subsequent entries in the series have changed very little as far as the weapon-based fighting mechanics are concerned, and have introduced new features and gameplay modes with varying success. Soulcalibur IV is no different in that respect; the series-first online play is a great addition, but though the visuals have improved and the gameplay has undoubtedly evolved, it still feels very familiar. And that's no bad thing.

The majority of the characters on Soulcalibur IV's roster will also be familiar if you're a fan of the series, though only around half of the 30-plus combatants are available at the outset, including Yoda on the Xbox 360 and Darth Vader on the PlayStation 3. Others are unlocked by defeating them in the single-player Story and Arcade modes, and by purchasing them with the gold that you're awarded for winning fights. There's more than enough variety on the roster to ensure that you can enjoy playing as at least a handful of different characters, and a robust customization system gives you the freedom both to edit their appearances and to create your own fighters from scratch.

Regardless of who you play as, Soulcalibur IV is accessible enough that even first-time players will have no trouble performing some powerful and great-looking moves. Rather than memorizing lengthy combo attacks and knowing how to attack your opponent, the challenge here comes from knowing when to attack, when to block, and when to sidestep around the arena. That's not to say that the combatants in Soulcalibur IV don't have impressively large repertoires of moves, because they do, it's just that very few of them are tough to pull off.

Your goal in Soulcalibur IV, of course, is to defeat your opponent by depleting his or her health bar. Alternately, you can win by knocking your opponent out of the "ring," which is possible in almost all of the game's beautifully realized arenas. New to the series--though reminiscent of a feature in 1997's Soul Blade--is the soul-gauge system, which appears alongside the health bar and changes color if you spend too much of your time blocking attacks and not retaliating with your own. When the gauge turns red and your health bar starts flashing, you're just an attack or two away from entering a defenseless "soul crush" state, at which point your opponent can perform a one-hit-kill critical-finish move. It takes a long time for that to happen, so the soul gauge isn't always an effective deterrent as far as overly defensive players are concerned, but it at least discourages online players from trying to score cheap victories simply by landing a couple of blows and then blocking until the time runs out.

Online play is where Soulcalibur IV really shines, though there aren't many different modes of play available. The action is fast-paced and free of lag for the most part, though if you have a slow Internet connection, you might find that your character takes a split-second longer to respond to your inputs than you're used to, which can prove fatal against a skilled opponent. You can choose to play ranked battles online against random opponents or join up to three other players in an unranked lobby, in which the winner of each round gets to stay in the fight as spectators get their turn in the ring. Both Arcade and Special modes of play are available online, the difference being that in Special mode all of the characters' move lists are augmented by special skills bestowed on them in part by weapon and clothing choices. Disappointingly absent from Soulcalibur IV, both online and offline, is an option to pit teams of fighters against one another. Team battles have appeared in the series previously, and given that the tagging mechanic is present in the single-player Tower of Lost Souls mode, its omission is baffling.

Considering that Arcade mode does nothing new and Story mode is really short and text-heavy, the new Tower of Lost Souls mode is where you'll find the majority of Soulcalibur IV's compelling single-player content. Taking control of one to three fighters, you must ascend (and later descend) the tower one floor at a time by defeating multiple groups of enemies without ever having your health replenished. Variety comes courtesy of opponents with carefully tailored skill sets, as well as battle-specific challenges that can be completed to unlock treasure chests containing new armor and weapons. For example, you might have to defeat three fighters who all have the ability to leech health from you, or who are impossible to force out of the ring. Optional challenges during these fights can be completed by meeting very specific conditions, such as landing the final blow as the timer ticks down to zero, performing four or more counter hits, or for defeating all opponents by knocking them out of the ring. As you ascend the tower, the difficulty level can ramp up pretty quickly, and you might find that you have to revisit the character-customization mode to prepare your chosen combatant for certain challenges.

How you go about customizing or creating a character for Soulcalibur IV depends on the use that you have in mind for the character. For Arcade mode, the only thing you need to concern yourself with is how your character looks, and you'll find that the number of armor pieces and weapons available for you to choose from increases quite dramatically as you spend time playing. For other modes, you'll have to consider the pros and cons of everything that you equip, even if that means ending up with a character who looks like he or she has just stepped out of a medieval thrift store. That's because just about every item has an impact, not only on your basic attack, defense, and health attributes, but also on the distribution of skill points, which fall into five distinct categories labeled power, impact, boost, gauge, and special. For example, equipping an executioner's breastplate will give you 30 power skill points to spend and will boost your attack and defense attributes, but at the expense of health points. There are dozens of items to choose from, and they're balanced so that it's possible for you to make more specialized fighters but not to gain an unfair advantage. Even skills such as temporary invisibility, unblockable attacks, and health recovery--which on paper sound like they'd break the game--are kept in check because to get any real benefit from them you have to forgo spending skill points in other areas. It's worth mentioning that more powerful (and costly) skills can be used only if you've played your character enough to reach a certain "style level," but reaching the level-nine cap doesn't take very long.

Style is something that Soulcalibur IV certainly has no shortage of. The nicely detailed character models look even better when the flamboyant animation kicks in, and the sheer variety that's on show in the arena locales can't fail to impress. The orchestral soundtrack ends up feeling a little too epic for its own good in places, but that's largely because it's paired with cheesy character dialog and an announcer who delivers his melodramatic lines without even a hint of irony. Fortunately, this isn't a game that's ever in danger of taking itself too seriously, as evidenced by the presence of Star Wars characters, animal costumes, novelty weapons, and plenty of amusing arena details.

Perhaps the most amusing, or at least laughable feature of Soulcalibur IV is that Yoda, Vader, and The Apprentice from LucasArts' upcoming Force Unleashed game all have stories that attempt to explain their sudden presence in the Soulcalibur universe. In terms of gameplay, none of the aforementioned fighters from a galaxy far, far away are a great fit with the rest of the roster, but they're certainly not so far removed that they ruin the game or anything like that. Some Force powers aside, Vader actually isn't radically different from some of the other members of the cast. The Apprentice uses the force a lot more liberally and, at least until you figure out how to fight against him, he can feel like a really cheap opponent when he throws lightning bolts and even his lightsaber across the screen at you. Given his diminutive stature, it's no surprise that Yoda feels very different from any other character in the game. He's impossible to throw and, considering that he spends most of his time jumping around very acrobatically, he can also be tough to hit. He doesn't use the Force a lot, though, and he moves around the arena relatively slowly, so he's not so much overpowered as just tricky.

The fact that Yoda and Vader are exclusive to the 360 and the PS3 respectively is easily the most pronounced difference between the two versions, but given that both games have an empty box on the Star Wars row of the character-select screen, it seems reasonable to assume that it'll no longer be an issue once downloadable content starts coming. The only other noteworthy difference between the two games is that the PS3 version offers an optional install to make the load times between fights shorter. Depending on how seriously you take your fighting games, the controllers that you use to play Soulcalibur IV might also be a consideration The PS3 controller's D pad is superior to the Xbox 360's on this occasion, but the latter's analog sticks fare a lot better. The question, then, isn't whether or not you should play Soulcalibur IV, it's which version you should play. 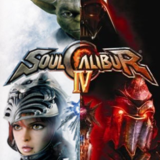