Sega's classic mascot got his start in this influential platformer, which is still very fast, tough, and fun to play.

Back in the early '90s, the battle for the video game market wasn't like today's three-way bloodbath between Nintendo, Sony, and Microsoft; it was a one-on-one showdown between Nintendo and Sega. As the two companies fought head-on for the hearts and wallets of millions of game players worldwide, one of Nintendo's clear-cut advantages was an understated little plumber named Mario. Sega needed a response to the fantastic Super Mario Bros. series, and so Sonic the Hedgehog was born. Sega's 1991 take on the side-scrolling 2D platformer was fast, colorful, challenging, and filled with personality. Packed with big, challenging levels and featuring finely tuned, deceptively simple gameplay, Sonic the Hedgehog was a breath of fresh air and an instant hit. The original game is now available as part of the Wii's Virtual Console service, marking a rather surreal occasion for longtime fans of both Nintendo's and Sega's classic titles. Platformers have come a long way since Sonic's first appearance, but the game is still highly playable and plenty charming.

This is a spot-on, no-frills emulation of Sonic the Hedgehog, starting with the digitized, harmonized "Sega!" declamation leading up to the title screen. As Sonic, you must traverse a series of levels, divided up into multiple stages, while rescuing innocent animals from the clutches of the sinister Dr. Robotnik. You can control the action just fine using the Wii Remote, though a GameCube controller or the Classic Controller might feel better. The action is fast and responsive; few games of the era moved as quickly as Sonic, and while there's occasional slowdown when enemies are all about, it's still pretty impressive to see the little guy tearing through a level, going through loop-de-loops, and bouncing around like a pinball at breakneck speeds.

The game remains as cute and colorful as ever, especially when viewed on a crisp progressive-scan display, and its catchy theme song and all-around great soundtrack still shine through. The gameplay itself is very easy to get into; you've got a jump button and that's it. Sonic's jump doubles as an attack, and he can turn into a very dangerous, fast ball if he tucks in while running. You accelerate faster and faster if you have enough of an uninterrupted runway, and the game's levels tempt you to pick up speed so that you can reach more and more gold rings and other bonuses. One of the game's distinguishing traits is how Sonic can always survive taking a hit from an enemy so long as he has at least a single gold ring in his possession--but getting hit causes him to drop every last ring he's carrying. Since more rings mean bigger points and extra lives, you'll be compelled to grab as many as possible...yet getting greedy about getting more rings sometimes puts you in harm's way, so there's an interesting balance of risk and reward. Also, the wide-open, puzzle-like level designs of Sonic the Hedgehog feel very different from those of similar games, which tend to be a lot more compact. Things like this helped Sonic quickly stand out.

Sonic the Hedgehog was a great game in its day, and though some of Sonic's subsequent games substantially improved on the formula created by the original, this first game still holds up nicely. It can be really tough, demanding that you repeatedly replay and gradually memorize its different stages. However, its precise and purely challenging action is easy to appreciate all these years later. For 800 Wii points ($8), it's not a total steal, but it's still worth it. 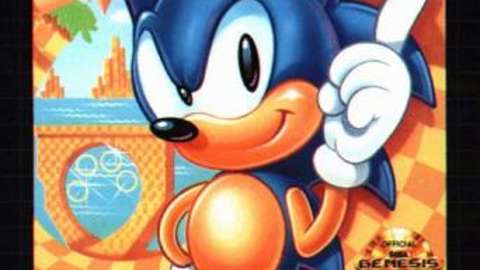