Various little improvements add up to make Sonic the Hedgehog 3 one of the best in the series.

Back in the 16-bit days, Sonic fans had to wait almost two years for the release of the third Sonic the Hedgehog game after second one. But thanks to the Virtual Console service, Wii owners only had to wait three months. At first glance, it'll probably seem incredible to you that Sega needed any length of time at all to produce what, on the surface, merely appears to be a formulaic follow-up to Sonic the Hedgehog 2. However, once you really dig in, you'll come to appreciate the many little improvements that help set Sonic the Hedgehog 3 apart from its predecessors.

Sonic 3 basically picks up where Sonic 2 left off. The opening cinematic sequence shows Super Sonic and Tails tracking Robotnik's spaceship from the previous game to an island that we'll soon learn is called Angel Island. Right off the bat, they're stopped by Robotnik's new partner and Sonic's soon-to-be rival, Knuckles the Echidna. Knuckles will appear frequently throughout the rest of the game to help the characters segue from one stage to the next and to act as a boss on occasion. Unlike Sonic 2, which only had a couple of brief story scenes near the end of the game, Sonic 3 is loaded with brief transitions and lengthier story sequences. These help establish the personalities of both Sonic and Knuckles, as well as gradually reveal how Robotnik managed to enlist Knuckles' aid in the first place.

Gameplay still mainly involves running quickly through colorful 2D environments, collecting gold rings, popping enemies, and bashing bosses--all while bouncy music plays in the background. However, the levels in Sonic 3 offer more interaction than those in previous games, in the form of such things as zip lines, fireman's poles, and giant tree trunks that you can climb by running upward inside of them. You'll also find a boss waiting for you at the end of every level (as opposed to every other level in Sonic 2), and these bosses tend to rip apart the background more often than the bosses in previous Sonic games. Coincidentally, the graphics in Sonic 3, especially the backgrounds, are pretty elaborate, as well as full of animated effects, such as swaying plants and heat distortion.

In terms of the little things, this third installment spices up the familiar "Sonic style" run-and-jump formula by giving the characters a few new tricks. Different shield items provide unique special abilities and allow you to pass through electrical, fire, or underwater environments unscathed. The fire shield's flaming missile attack is great for frying enemies and crossing big gaps in a hurry. As you could in Sonic 2, you can choose to play as Sonic or Tails, and you can tackle the quest alone or have someone else help out by controlling the other character with a second controller. This time around though, Sonic and Tails each have a unique personal ability in addition to the basic jump and spin-dash moves they share. Sonic can conjure a shield for a second, which allows you to deflect projectiles and pass by some hazards. However, Tails can float for short periods and land on ledges beyond Sonic's reach. The majority of the game's 12 stages are designed so that you'll find multiple pathways meant for either character.

Without a doubt, the most welcome new feature in Sonic 3 is the one that doesn't have anything to do with gameplay: the six save slots that record your progress. In previous Sonic games, you had to go through the whole quest and try to gather all the chaos emeralds in one sitting. Even with the Wii's save-state feature, you could pick up a game in progress, but you couldn't hit reset and replay the current level. Thanks to the save files provided by Sonic 3, you now have the option of resetting when you flub one of the chaos emerald minigames or just want to try a stage over again.

Apart from simply disliking the 2D run-and-jump genre, the only other reason you could possibly have for passing on Sonic the Hedgehog 3 is the off chance that Sega will release "Sonic 3 & Knuckles" in combined form once it gets around to making the fourth Sonic game, Sonic & Knuckles, available on the Virtual Console. Considering such a release would come months down the road and is a big if as it is, that would be a silly reason to deprive yourself of what is arguably one of the best of Sonic's adventures. 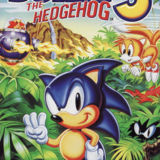