Sonic Riders can occasionally be quite entertaining, but too many of those entertaining moments are overridden by bouts of frustration and weak mechanics.

Like most popular platformer franchises, the Sonic series has dabbled in the racing genre in the past with games like Sonic R for the Saturn. Despite the fact that Sonic's already-speedy nature might seem like a perfect fit for a racing title of some sort, the results of these attempts have been disappointing thus far. Sonic Riders is the latest attempt to get Sonic back on the race track, though this one eschews the typical kart- and foot-racing brands of racing one would usually find in a racer starring popular platformer heroes. Instead, Riders gives Sonic and pals their very own Back to the Future II-style hoverboards, which they can use to dart and dash around wacky tracks of varying levels of difficulty. Unfortunately, Sonic Riders isn't really all that much better than any of Sega's previous attempts to make Sonic a racing hero, simply because it can't quite manage to keep its diverse and chaotic racing mechanics together into one cohesive package. There are times where you'll find yourself enjoying how blazingly fast the game can go, and others where you'll be frustrated beyond belief by the very same thing. And that's all within a single race.

The premise behind Sonic Riders is the kind of thing that's going to be utterly impenetrable to anyone but the most vehement Sonic fans. Along with his pals Knuckles and Tails, Sonic is, once again, on the hunt for chaos emeralds. Suddenly, the team witnesses a theft of an emerald by some very edgy-cute-looking thieves riding hoverboards (or, "extreme gear," as they're known in the game). Not long after that, Dr. Eggman shows up and starts rambling about wanting to hold an extreme-gear racing tournament for some reason or another. Turns out the thieves are part of a crew of legendary thieves known as the Babylon Rogues, and there's a whole thing about trying to rediscover the long-hidden island of Babylon, which harbors some kind of treasure...or something like that. It's a completely incoherent storyline, not to mention one that rehashes a lot of stuff that's been done 20 times better in pretty much every other Sonic game every made. Evil plots are hatched, Sonic and Knuckles get into it with the bad guys, Tails says a few overly precocious things, and so on and so forth. Then again, this is a racing game, so the plot is really incidental to the whole package. Still, this game probably would have been much better off just going the minimalist story route, a la something like the Mario Kart games.

The actual racing in Sonic Riders is kind of an odd mishmash between F-Zero GX-style futuristic racing and something like SSX. When you get going during a race, the pace can be extremely quick--as it should be in a racing game starring Sonic--but pure speed isn't really enough to win. There are a number of secondary mechanics and meters that you'll have to concern yourself with to succeed regularly. First and foremost, you'll find yourself monitoring your air meter, which depletes every time you hit the boost button. Incidentally, that's going to be a lot of the time. In order to keep up, you're going to find yourself hitting that boost an awful lot, especially in the early goings, when you're still trying to figure out the layouts of the tracks and all the shortcuts. That's bad, because once you're out of air, your character jumps off his or her board and starts running until you can find a pit to stop in for a moment and recharge. It's not just boosting, either--running into objects on the track also kills your air. While that makes some measure of sense, the whole pit-stop aspect of the game really sucks a lot of the fun out of the racing. The whole point of the game is that you're going along at increasingly blinding speeds, trying to ride as much momentum as possible; it doesn't make much sense that you suddenly have to stop and recharge because you accidentally hit a wall after boosting a bunch. Not to mention that the pits themselves aren't even all that out of the way on the tracks, so you may find yourself running into them accidentally every now and then.

Fortunately, some of the other concepts in the gameplay pan out a bit better. One of the cooler things Sonic Riders has to offer is the turbulence-riding mechanic. Essentially, as other racers zoom along the tracks, they give off streams of turbulence that you can actually ride into and get a big speed boost out of. Turbulence does sort of take the game out of your hands, though, as you could just as easily ride it out without ever touching a button. But if you did that, you'd miss out on the opportunity to pull off some tricks. Yes, there's actually a rudimentary trick system in Sonic Riders. Whether you're riding turbulence or taking big jumps, all you need to do is spin the left analog stick to and fro and you'll pull off a few neat flips and spins. It's nothing you could exactly call deep, but pulling off tricks is a necessary enjoyment, as doing them and landing correctly afterward nets you sizeable air boosts. There are also some unique shortcuts that various characters can take depending on what class they fall under. Power racers, for instance, can simply bowl through certain obstacles on the track without losing a bit of speed, whereas speed racers can grind various rails scattered throughout a course. As nice an idea as the class system is, it doesn't make as much difference as it sounds. You can really pick just about any racer in the game and play pretty much the same way without much consequence.

That's mainly because the track designs simply lend themselves to the same level of frustration, no matter who you're playing. While all the tracks are built with the sorts of launch ramps, loop-de-loops, and other craziness you'd expect, they're just not nearly as much fun to race around as you'd hope. For one thing, the game relies a little too heavily on taking corners perfectly. These tracks are littered with the sorts of blind jumps and turns where you can just go flying off the course and have to reset yourself, often leading to you losing the race because of it. It's not always something that can be simply corrected by practicing, either. Sometimes you'll be taking a corner perfectly, only to run into a wall of turbulence that you can't bust into to ride because you're not traveling fast enough, which in turn bumps you off the edge of the course. The tracks can be aesthetically pleasing to look at, and there are more than enough shortcuts, jumps, and other normally fun things to race around, but the tracks are simply too short, too loose, and too frustrating to keep up with what the fast-paced racing requires.

The controls also leave something to be desired. It makes sense that trying to control an ultrafast hoverboard would be a little loose, but the controls here can just be plain unwieldy in a lot of spots. When you're in a position to grind a rail, you have to press the jump button to get up, and then press it again to grind, which just seems kind of unnecessary. When you want to round a tight corner, you need to hold down one of the trigger buttons to sort of slow down and lean into the turns. The part the game fails to mention is that if you hold down the button for a half-second too long, you'll overshoot the turn and go crashing into the opposing wall. Irritating, to say the least.

If nothing else, Sonic Riders does fare better as a multiplayer game than as a single-player one. The artificially intelligent racers tend to run very predictable races, so getting into the multiplayer arena does away with that problem. There are also quite a few modes to choose from apart from just normal races and the story mode. There's a mission mode, in which you're tasked to perform specific tricks to beat the Babylon Rogues team; a survival mode that includes both standard battle and race variants; and the tag mode, in which two teams of two racers, each of which share a single air tank, race through a selected track. Honestly, none of these modes are really any better than the standard races, but at least there is a good bit of variety available. On top of all of that, the game lets you acquire a lot of unlockables, including new extreme gear, as well as plenty of hidden characters, some of which are certain to get longtime Sega fans giddy with glee.

Sonic Riders also isn't a bad-looking game by any means. Save for a few sporadic bursts of frame rate slowdown, the game does move at an excellent clip, providing exactly the sort of speed that you'd expect. Oddly enough, we noticed a bit more in the way of frame rate drop on the Xbox version than the PS2 one, but apart from that, the two versions look pretty much identical. The levels and characters are bright and colorful, though when you slow down, some of the track areas tend to look kind of drab and muddy. There's a copious amount of CG cutscenes interspersed throughout the story mode, and while the scenes themselves are reasonably clean looking, they're not anything special, either. Less impressive is the game's audio. The voice acting is about as hammy as any other Sonic game, but the incessant chatter of the female race announcer tends to grate as you're speeding along. The music and sound effects are mostly just generic Sonic fodder, and nothing about them stands out.

Sonic Riders is arguably the best Sonic-themed racer out there, but it does little to distinguish itself amid an already overcrowded platformer-turned-racer market. The use of the extreme gear in lieu of the usual cartoon racer vehicles is a nice twist, and there is a nice bounty of content for players to get through, but the racing itself just isn't strong enough to keep the game afloat for terribly long. Ultimately, Riders is a racer that provides some decent fan service to the Sega loyal, but not much else. 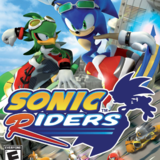 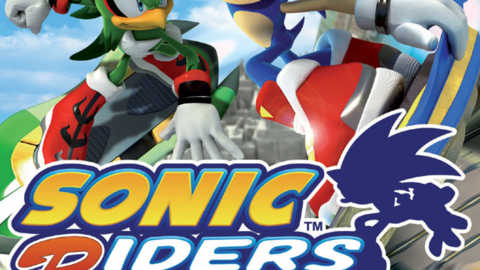