Sonic and the Black Knight Review

At first glance, Sonic and the Black Knight looks like a success, seeming poised to deliver the sorts of speedy thrills that make the heroic hedgehog's greatest adventures so exhilarating. But alas, it quickly becomes clear that this sense of speed comes at the expense of anything resembling entertaining gameplay. Sonic and the Black Knight is a simple, sloppy, frustrating game.

Darkness has fallen on the once-thriving realm of King Arthur. The noble ruler has been corrupted by the power of immortality granted by the scabbard of the sacred sword Excalibur and has summoned armies from the underworld to stamp out all that is good and pure in the land. Merlina, granddaughter of Arthur's sorcerer, Merlin, summons the only one who can defeat the king and restore prosperity to the realm. Sonic falls out of the sky to find himself thrust into a world without chili dogs or Dr. Robotnik, though the knights of the Round Table who will fight both against and alongside him bear an uncanny resemblance to allies and rivals from his home. Sonic arms himself with the pompous talking sword Caliburn and sets off to become a true knight and save the land. The tale is told in a simple but charming storybook style, and while the plot bears little connection to actual Arthurian legend, it successfully pulls off the unusual concept of tossing the blue blur into a fantasy landscape without the whole thing coming off as absurd.

Unfortunately, the gameplay doesn't pull off the concept nearly so successfully. The levels are narrow and linear and typically require you to do nothing more than hold up on the nunchuk's thumbstick to tear through them and tap A on the remote to jump over the occasional obstacle. You can also maneuver left or right a smidge, which is useful for avoiding environmental hazards or smashing objects to collect the rings that serve as Sonic's hit points. Sonic turns in all the right places, grinds on rails, leaps from pole to pole, and performs other acts of derring-do, but he does it all without any input from you, making you feel more like a spectator to the action than a participant. There are a few different types of missions--some involve just reaching the goal, while others have you defeating a certain number of enemies or handing rings over to townspeople by matching a few onscreen button presses--but the simplicity of it all makes the experience feel dull and repetitive long before the tale reaches its conclusion.

You'll encounter plenty of foes blocking your path, but whether they take the form of generic knights, giant spiders, or more generic knights, fighting them is a basic affair of blocking attacks with the Z button and hacking your foes with a quick shake of the remote. Considering how fast the game is in other respects, the combat is incredibly sluggish, with a noticeable delay between your shakes and Sonic's swings. There's also a powerful special attack called the soul surge that you can use, provided Sonic has some energy in his soul gauge. Anything that lets you make short work of your enemies is a blessing, since the tiresome combat makes them less of a challenge and more of a nuisance. It's a relief when you can just jump over groups of enemies as you speed toward the goal and avoid dealing with them altogether.

Boss fights can't be avoided, which makes sense, but it's unfortunate because they feature one of the most annoying mechanics in the game. Whenever you clash swords with these foes, an image of the remote being repeatedly angled up and down appears on the screen. However, if you angle the remote up and down repeatedly yourself, your opponent will invariably triumph and deal you some damage. You're supposed to respond to this prompt with a single swinging motion, though the game is never clear about this. It's also wildly inconsistent about the amount of time you have to respond to the prompts, sometimes giving you a moment, while at other times seemingly requiring you to anticipate them and begin the swing before it appears.

In fact, the game is lousy in general about communicating with you. At the end of each stage, for instance, you're given a rating on your performance on a scale of one to five stars, but neither the game nor the manual states what is factored into this rating. If you're given a low rating, is it because you were too slow? You took too much damage? You didn't slay enough enemies? The stars you earn bring you closer to leveling up Sonic's combat proficiency, granting you speed and attack bonuses, but the opacity of the rating system makes trying to improve your performance rather like fumbling about in the dark. There are other light role-playing elements as well, like collecting and identifying items you can equip Sonic with. You can also use these items to create weapons for the other playable characters who become available at about the halfway point. Though the other characters have slightly different move sets, neither these new moves nor the equippable items and weapons have a significant impact on gameplay.

Sonic and the Black Knight is a good-looking game, even when you're moving slowly enough that you can actually get a good look at your surroundings. The levels are richly detailed, and there are a variety of environments to whiz through, from lush open grasslands to the courtyards of a majestic castle to a tumultuous volcanic wasteland. Details like blazing sunsets and flashes of lightning in the distance lend all the action a dramatic flair, though the enemies you encounter have a sameness to them that makes fighting them all the more dull. The audio presentation is decent, with a soundtrack composed mostly of faux-metal J-pop songs. The exaggerated thwacks and whooshes you hear are a fitting accompaniment to all of Sonic's leaping and soaring through the air. Sonic sounds as cocky as ever, and the rest of the voice cast turn in equally fitting performances.

In addition to the single-player adventure mode, there's a local multiplayer mode that lets up to four players compete in various small-arena battles and games of tag, but this mode is so threadbare that it's unlikely anyone will bother with it for long. You can also compete in a selection of events in a ranking mode to have your score posted on a global leaderboard. There's no shortage of challenges to complete, even after you've put in the six hours or so to get through the main story, but the gameplay is just too basic and tedious to make this prospect enjoyable. This particular sword should have been left stuck in the stone where it belongs. 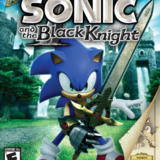