If you own the Dreamcast version of Sonic Adventure, you're better off sticking with that.

Sonic Adventure DX is essentially a port of the original Sonic Adventure, which launched alongside the Dreamcast in September 1999, but Sonic Team has thrown in a few extras to entice those who played the Dreamcast version and to extend the replay value of the game as a whole. Unfortunately, if you've already played the Dreamcast version, these extras definitely aren't worth your money. For everyone else, Sonic Adventure definitely has its moments, and some aspects of the game have held up reasonably well over the years, but it still has its fair share of problems, ranging from an unstable frame rate to some inconsistent collision detection.

Sonic Adventure DX is structured a little differently than its sequel, Sonic Adventure 2 Battle, in that there's a hub area that Sonic and the other characters in the game have to find their way through to access the actual levels. The portions of the game that focus on this hub area seem a little pointless at times, particularly when all you have to do is take a key from one location to another, but most of the time it simply functions as a tool for advancing the plot.

In the beginning of the game, you can play only as Sonic, but whenever you meet a new character--such as Tails, Knuckles, Amy, E-102, or Big--you can start playing as that character in a series of separate missions. It's worth pointing out that some of these missions overlap, and some are nearly identical to the ones found in Sonic's portion of the game. However, some of them are vastly different, such as Big's missions, which have the enormous purple-and-blue-striped cat attempting to capture his pet frog. E-102 offers a slightly different pace as well, since he's a relatively slow-moving robot equipped with a cannon for destroying various types of targets. Tails' missions will have him racing against Sonic, while Knuckles will have to retrieve pieces of the chaos emeralds. In any case, the missions featuring the secondary characters aren't as entertaining as the ones that feature Sonic, but you'll have to play through them if you want to unlock the last level and the game's real ending.

While that was pretty much the only incentive for playing through all the levels in the Dreamcast version, Sonic Adventure DX attempts to add more motivation by throwing in some Game Gear Sonic games that can be unlocked by acquiring Sonic emblems. You can get these emblems by performing well in individual levels, or by simply searching for them in various parts of the game. It's a nice extra to have initially, but once you realize that most of the Sonic Game Gear games weren't all that great to begin with--and that some of them actually have some slowdown issues--your interest in collecting enough emblems to unlock all of them will diminish.

In addition to the main game and the Game Gear unlockables, Sonic Adventure DX offers a mission mode where you can venture around the city and temple areas in an attempt to complete a series of relatively minor missions. For example, in one of Sonic's missions, all you have to do is find a particular man standing in front of a hamburger shop in one part of the city and then bring him over to the train station. It probably wasn't the wisest decision to design an extra mode around the worst part of the original Sonic Adventure, but if you're absolutely intent on spending more time with Sonic Adventure after you've defeated the last boss and raised a chao (the Pokémon-like creatures in the game) or two, then this mode might be worthwhile.

It's strange that Sonic Adventure DX offers this additional content, considering that the developers really didn't put all that much effort into fixing the problems with the main game. Interestingly, the frame rate has been cranked up to 60 frames per second, and while that might sound like a good thing, it has only made the frame rate drops that much more noticeable than they were in the Dreamcast version of the game. The game slows down quite a bit--particularly when you're trying to move at higher speeds in Sonic's levels--which is totally unacceptable, considering that this game was released almost four years ago.

The fact that the graphics haven't been improved makes this even more irritating. There are times when the lighting looks a little different from the lighting in the Dreamcast original, sometimes to the point where Sonic and the other characters almost look cel shaded. The water effects in some areas also seem to be slightly improved, but for the most part, the GameCube version looks nearly identical to its Dreamcast counterpart.

Another big problem is the collision detection. Sonic and other characters will hitch themselves on corners fairly regularly and occasionally go into seizures when they make contact with certain objects in the environment. Worst of all, you'll sometimes go right through solid objects. This is particularly noticeable in some of the later levels, and even one of the later boss fights with Dr. Robotnik, in which we saw Sonic not only fly right through Robotnik, but also fall through a solid platform.

If that's not enough to get you adequately frustrated, the camera becomes increasingly more difficult to deal with as you progress through the game. In fact, there are points where it will get trapped behind a wall, making it completely impossible to see what's going on. There's an option to change the camera to manual so you can attempt to maneuver it around yourself, but this option is really useful only when the camera gets caught on something. Otherwise, you'll find yourself having to move it around far too often.

One aspect of Sonic Adventure that has held up quite well over the years is the music. While the cheesy, '80s-style rock in some parts of the game can be irritating, it starts to grow on you after a while, and you'll more than likely find it amusing by the time you've reached the latter stages of the game. The tracks that don't attempt to revive the hair-band movement are all pretty good and do an excellent job of matching the fast pace of the game and mimicking the traditional Sonic style of music. Unfortunately, the voice acting and dialogue are pretty horrible, and both serve as an example of why games like this don't really need a story.

It's great that Sonic Team decided to bring the original Sonic Adventure over to the GameCube, and their addition of some new content is commendable, but it's incredibly disappointing to see that they didn't clean up some of the game's major problems. So it basically comes down to this: If you own the Dreamcast version of Sonic Adventure, you're better off sticking with that and not picking up the GameCube version of the game. Those who have never played the original should rent the GameCube version to check out some entertaining level design and experience Sonic's first leap into 3D, but then leave it at that. 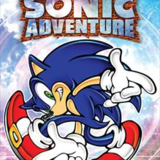