When Sony released its network adapter last summer, it did so with a handful of online games to back it up. While most of the early lineup consisted of sports games and sequels, Zipper Interactive's third-person shooter, SOCOM: U.S. Navy SEALs, quickly rose to the top of the pile. Now, a little over a year later, Sony and Zipper have reteamed for a sequel that makes good additions and fixes problems along the way.

While SOCOM II's strength lies in its robust multiplayer component, the single-player campaign mode is definitely cool on its own. You, as the leader of a four-man team, take on dangerous missions in locales such as Albania, Russia, and Brazil. The game's 12 missions focus more on stealth than simple shooting, so you'll be doing a lot of sneaky shooting from a distance to accomplish your goals while keeping your team safe.

Commanding your team in SOCOM II works roughly the same as it did in the original game. You can select commands from a handy menu or simply issue voice commands through a PS2-compatible headset, which is sold separately. The voice recognition works very well, but you have to give specific commands to get the team to act. While your team will respond to "Fireteam, fire at will" by saying something like "Going loud," your teammates won't respond to "Fireteam, go loud" or other phrases with the same meaning. This means that you'll have to take a little time to become familiar with the language of the game, but that comes quickly.

Teamwork is important in the game's mission mode, and this time around, the rest of your team is a little chattier. They let you know when they don't understand a voice order, and they keep you better informed about their actions. For example, if your team is under orders to hold its fire, but a threat gets so close that contact can't be avoided, one of your team members will take the shot and then inform you that he had to break your orders to stay safe. This makes your teammates feel a little less like drones who are there to do your bidding and more like, well, teammates.

SOCOM II has an even wider array of weapons to choose from. In single-player, you'll start out with the SEAL weapon set, but completing the game will give you access to SAS, Spetsnaz, and other sets of weapons. Shotguns have been added to the game, though since the single-player game is focused more on shooting people from a distance, the shotgun is a little more useful as a multiplayer weapon. Along with all the assault rifles, pistols, submachine guns, and sniper rifles in the game, you can also equip a rocket or grenade launcher in multiplayer games. Ammo for these explosive weapons is pretty limited, and to fire a rocket you have to be standing completely still, so the weapons don't become grossly overpowered. In multiplayer matches you can configure your game to allow only certain classes of weapons, making "pistols only" matches a reality.

With its 12 missions and multiple difficulty settings, the single-player game will keep you busy for a while, but the multiplayer is where the action is at. The team-based online game supports up to 16 players. The game is broadband-only, and is pretty lag-free even over a standard cable or DSL broadband connection. The game features 12 new maps for online play, and the 10 multiplayer maps from the original SOCOM are also present, though a few of them have seen a few minor changes, such as slightly different obstacle placement and the insertion of stationary gun turrets, and some daytime missions now take place at night. The maps are nicely detailed, and the new maps are, for the most part, larger than the maps from the first game.

The three multiplayer mission types from the first game return, and they're joined by two new modes. The old modes are suppression, which is a standard team deathmatch sort of scenario; demolition, which places a bomb in the center of the level and charges each team with the task of using that bomb to destroy the opposing team's base; and extraction, where the SEAL team must find a group of hostages and lead them to safety while the terrorists attempt to keep the hostages under control. The two new modes, breach and escort, fit into the mix just fine, even though they really aren't terribly different from the existing options. Breach is a variation of demolition that puts one team, armed with explosives, on the offensive, while the other team must defend its base. Escort functions similarly to extraction, except that the SEALs start out with control of the civilians instead of having to go get them before moving them to a safe extraction point.

The online section of the game also has more options than before. Suppression games can now be played with respawn turned on, letting players play one map for 20 minutes straight rather than being eliminated after dying once and using a more-standard round-based system. The game has better support for clans, and the ranking system has been beefed up to include player ranks. You can then restrict games to only allow players of your rank, which should keep games around a relative skill level. The first SOCOM was plagued by cheaters, and we can only hope that Zipper's claims that SOCOM II is less susceptible to cheating remain true.

The team-based multiplayer found in SOCOM II is a lot of fun. Though it can be played as a simple run-and-gun sort of game, planning a little strategy with the game's voice chat support and covering each other's back definitely makes the game deeper than your average shooter, though not so deep that it alienates the action game fan. It's certainly a careful balance, but SOCOM II handles it quite well, which makes it appealing to players of varying levels of interest.

Though the PS2 hard drive won't be on store shelves for a few months, SOCOM II is the first domestic game to feature hard drive support. While Sony won't commit to any specifics at this time, the plan is to feature the same sort of downloadable content that has become standard in most Xbox online games. The possibility of future expansion is promising, but there are more than enough maps, player characters, and weapons here to keep players busy for a long time.

On top of its great gameplay and long list of options, SOCOM II is a great-looking game. The player models and environments look really fantastic, and the addition of foliage provides more cover while also making the levels look more realistic. The animation is a bit better than in the previous game, as well. Examples of this improvement are everywhere, but the clearest example is the way soldiers hit the dirt when you switch from standing to lying prone while on the move. Previously, this process looked a little mechanical. The dive has a much more natural look in SOCOM II. The game also makes better use of lighting--or lack thereof. The presence of thermal goggles and other night-vision gear adds another level to the gameplay, and the effects used for these items are great.

When it comes to delivering an authentic feel, a game's sound can really make a big difference. SOCOM already had some great gun sound effects, and most of these are duplicated in SOCOM II. The music, even though it gets a little too loud at times, is great at lending a cinematic feel to the onscreen events, swelling when action occurs and fading back as things quiet down. The game also has some good voice work. Like in the first game, the voices are recorded in their native language, so you'll have to either be a linguist or read the subtitles to keep up with the plot.

There really isn't much competition in this category on the PlayStation 2. But with its solid single-player mode and numerous online additions and improvements, SOCOM II easily replaces SOCOM as the console's best online action game. Anyone looking for some military-themed online combat need look no further. 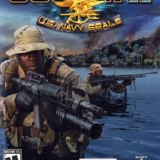