Sins of a Solar Empire Review

This isn't just the first great strategy game of 2008. It's also an absolute must-have if you love space strategy.

There's a blissful nirvana strategy gamers yearn for, even though experiencing it usually involves a considerable loss of sleep along with a steep drop in productivity for days on end. Sins of a Solar Empire is one of those rare games that can deliver an incredibly addictive experience that devours a healthy chunk of your life, and you won't mind a bit. Not bad for a debut game from a relatively small developer. Ironclad and publisher Stardock should be proud, because they've delivered one of the most original, compelling strategy games in recent years.

Let's get this clear: Sins isn't anything like a typical turn-based space strategy game such as Galactic Civilizations or the granddaddy of the genre, Master of Orion. Instead, this is a real-time game--but don't let that make you think that it's Command & Conquer in space. Though it's in real time, Sins unfolds at such a leisurely pace and can happen on such a gigantic scale that you'll easily manage five or six gigantic fleets at a time as you battle across multiple star systems that contain dozens of worlds.

The game is set in a distant future where the Trader Emergency Coalition--an alliance of various human worlds--bands together in the face of two threats. The first is the Advent, an offshoot of humanity that has embraced an alien philosophy and has come looking to spread the word by force. Even direr is the Vasari, a mysterious alien race that seeks the annihilation of both factions. Sins lets you play from the perspective of any of the three factions, which are approximate mirrors of one another.

Like many space strategy games, the action begins with you in control of a single planet, and from there you must explore the rest of the system worlds, locating planets to colonize, as well as resources that you can exploit to fuel your research and ship-building needs. Sins isn't as ambitious as other space strategy games that task you with taking over a galaxy; instead, the action is limited to a maximum of five local stars, each with a network of planets around it. Travel among planets is limited via strict space lanes, so some planets are natural choke points. Planets themselves come in four varieties. Terran and desert planets can be colonized easily, but to settle ice and volcano planets you must research the appropriate technology first. Asteroids can also be colonized, but they're so small that they can support only tiny populations, making them ideal for outposts.

To support your expansion, you'll have to build a plethora of vessels. Scouts explore the planetary systems, locating ideal worlds to colonize with colony ships, as well as providing advance warning on incoming enemy fleets. Warships come in three classes. The smallest are frigates, and they include frontline combatants, siege vessels that can pummel planets with nuclear weapons, and missile platforms. Then there are larger cruiser-class vessels, such as escort carriers that can deploy squadrons of fighters and bombers to heavier warships. The crème de la crème, though, are the capital ships, which you can build only a handful of. Capital ships are huge, expensive, and powerful, but they're also like the characters in a role-playing game in that they can level up as they gain experience, making them more powerful and unlocking unique and potent abilities. The ability to gain experience creates a powerful dynamic, as you want to get your capital ships into fights so they can level up, but you also want to protect them from danger, because the loss of them can be devastating. However, if you get a task force of high-level capital ships and smaller vessels together, you'll have a force to be reckoned with.

Good strategy games force you to constantly make decisions about where to allocate your resources, and Sins does an exceptional job of this, mainly because you'll usually find yourself having to juggle where to invest your precious resources. There are three resources in the game: money, metal, and crystal. Money is generated by having large planetary populations or by building trade stations. Metal and crystal can only be harvested on small asteroids. Building warships or structures, making planetary improvements, and conducting research consumes large amounts of these resources, and usually you'll have a shortage of at least one of them, which forces you to make some difficult decisions.

It's also possible to engage in a bit of diplomacy, though Sins takes a different tack than a lot of other strategy games. You can do the standard diplomatic maneuvers like declaring a nonaggression pact or forming an alliance with someone, but to do so, you've got to prove your worth to that faction by pursuing missions it puts toward you. For example, one faction might task you with destroying a certain number of defensive structures of another faction. Successfully completing the mission will earn you favor, though not completing the mission will earn disfavor. In order to form an alliance with any faction, you'll have to complete several missions for it.

Then there's the pirate system, which is a brilliant way of waging war by proxy. The pirates are third-party raiders who launch attacks periodically. You can influence whom they attack by raising the bounty on one of your opponent's heads. However, this creates an eBay-like bidding war, where factions are trying to either get the bounties off of their heads or put them on opponents they really need attacked. The danger is that when you bid, you actually put money into the pot that you can't withdraw, even if you lose. That means that if you get into an astronomical bidding war and win, the bad news is that in the next round, the opponent already has a mountain of money in the auction that you have to overcome. The other danger is that the more money there is in the bidding, the bigger the pirate attack will be. It's a pretty slick system, though its one flaw is that it requires you to babysit each auction when it happens, a process that takes a minute or two. Given that attacks happen every 10 or 15 minutes, this is an activity that takes away from the overall pace of the game.

All of this sounds like it might be a handful to handle in real time, but Sins unfolds at a stately, almost leisurely, pace. The action is fast enough that you're constantly busy making decisions, but it's rarely frenetic to the point where you're overwhelmed. To help you manage a huge empire, there's an innovative empire tree on the side of the screen that gives you an outline of all of your planets, fleets, and factories. Let's say you have a fleet battling in a distant system and taking losses. Without zooming away from the battle, you can select a nearby shipyard and start ordering up replacement ships that can automatically join the fleet. With the empire tree, it's relatively easy to manage multiple fleets consisting of dozens of warships each.

If Sins has a downside, it's that larger-scale games will easily take hours upon hours to resolve. Medium-size maps will chew up six to eight hours, often to the point where you will be looking at the clock and wondering just how effective you're going to be the next day on about three or four hours of sleep. Larger games can take even longer at the default speed settings. Things would end a lot faster if there were alternate victory conditions or if the artificial intelligence would surrender after it clearly has no chance of winning. Instead, you have to pulverize each enemy position before the game ends, a process that can take a while. One thing that you can do while you're finishing someone off, though, is to work on accomplishing achievements. The game has its own achievement system that rewards you for remarkable performance, such as wiping out a certain number of enemy capital ships or settling a pirate base. One dastardly achievement challenges you to win without researching a single military technology.

The game features random maps and scenarios, but one thing that's missing is a campaign. Still, Sins of a Solar Empire is an excellent single-player game and one that translates well into the multiplayer realm, especially since it's a lot harder to beat a human opponent than it is a machine. The built-in server browser connects to Ironclad Online, where it's easy to create a multiplayer game or join up with others. The one thing to keep in mind is that, for the sake of brevity, it's usually best to go with small maps in order for the game to resolve in one sitting. Though it's possible to save a multiplayer game, it will take a considerable amount of dedication and scheduling by all parties involved to tackle a huge game.

Finally, the game's visual presentation is excellent. It's not a graphically flashy game, but it works on many levels. The ship designs look cool up close, and watching fleets slug it out is always fun. Pull the camera back, and ships and squadrons are replaced by distinctive icons, giving you the big picture even when you've zoomed out and are looking at a solar system as a whole. The interface is also quite elegant, and it scales nicely to a wide variety of display sizes. The audio and sound effects aren't quite as distinctive, and the music provides some decent sonic wallpaper.

In sum, Sins of a Solar Empire is an absolute must-have if you enjoy strategy games. It's an addictive, deep game that elevates space strategy to new levels. At the same time, it provides a fresh, original take on one of the oldest and most revered subgenres in all of strategy gaming. 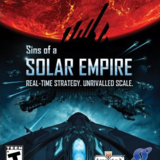 Sins of a Solar Empire
Follow
$9.00 on Walmart
Buy 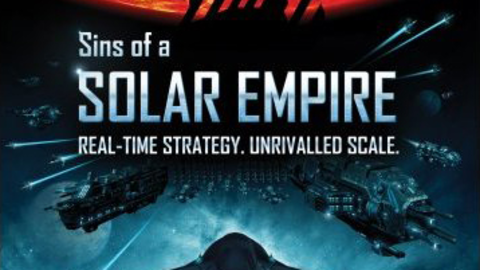 Sins of a Solar Empire

Sins of a Solar Empire is a massive space strategy game that lets you create huge fleets of starship and conquer the universe.

8.5
Sign In to rate Sins of a Solar Empire